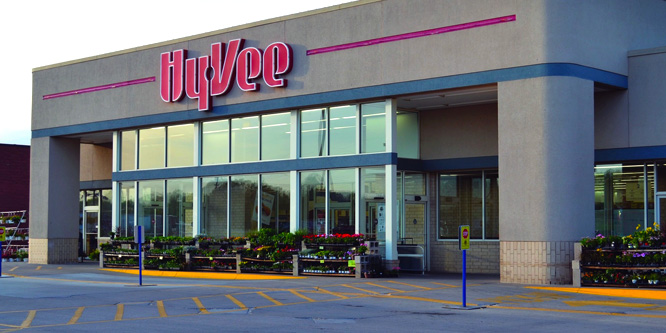 Midwest grocery chain Hy-Vee plans to expand its footprint with a move into four southeastern states.

The chain, which presently has more than 285 locations, will open new stores in Kentucky, Tennessee, Alabama and Indiana. Supported by the opening of its third distribution center in Nashville, the grocer expects to have at least 21 new stores in the four states in the next four years, including in Nashville, Knoxville, Memphis, Huntsville, Louisville and Indianapolis.

“This is the growth for the next 25 years for Hy-Vee in this territory,” said Hy-Vee CEO Randy Edeker in a video to employees obtained by the Des Moines Register. “If we can build out 50 stores in this market, we estimate that is $6 billion [in sales]. But overnight we’re going to go from a regional company to a national company.”

The employee-owned chain currently operates in Illinois, Iowa, Kansas, Minnesota, Missouri, Nebraska, South Dakota and Wisconsin. The move will mark Hy-Vee’s first expansion into a new state since 2009, when it entered Wisconsin.

Aldi, Publix and Wegmans are among major grocers that have been expanding their U.S. footprints over the past few years, despite having ramped up e-grocery as the pandemic imposed challenges to foot traffic. Kroger earlier this year entered Florida with a digital-only push.

According to the Courier Journal, Hy-Vee — with the slogan, “A Helpful Smile in Every Aisle”— is Iowa’s largest private employer, standing out for its dine-in and carry-out options, full-service meat department and bakery, fuel discounts and customer service.

Hy-Vee is expected to face strong regionals, national grocers and big box chains that are entrenched in the new markets it is entering.

John Talbott, director of the Indiana University Retail Research, speaking about Hy-Vee’s prospects in Indianapolis, told the IndyStar, “Price is one thing you compete in, but, you know, the biggest players in the market are Walmart and Kroger. These guys are not going to go in and out of the Walmart and Kroger price. That’s just inconceivable,” Talbott said. “They are going to compete on something completely different, which is the perception of quality and customer service.”

DISCUSSION QUESTIONS: What will Hy-Vee have to do to succeed in the markets it is moving into? Will 2023 be a good time for a regional grocer to launch in a new market?

Please practice The RetailWire Golden Rule when submitting your comments.
Braintrust
"Although a David among several Goliaths, Hy-Vee has a secret weapon that has proven successful in the markets it currently serves — commitment to community. "

"Don’t bet against Hy-Vee. The company’s strategy will not be to get into a price war with Walmart, Target or Kroger."

"Hats of to Randy Edeker and the Hy-Vee leadership team for commitment, vision, and fortitude."

Hy-Vee will face some stiff competition entering new markets. Hy-Vee is known for excellent service and reasonable prices. While living in the Midwest previously, we noticed and appreciated the outstanding service at Hy-Vee. Since entering new markets is never easy, Hy-Vee will have to impress customers with a level of service that will surprise and delight them.

As a new market entry, Hy-Vee’s greatest challenge will be to provide a point of difference great enough to get consumers to try them out. Then once someone is in the door, they will need to deliver consistently. It’s not complicated, but it’s hard to do.

Hats of to Randy Edeker and the Hy-Vee leadership team for commitment, vision, and fortitude. Although a David among several Goliaths, Hy-Vee has a secret weapon that has proven successful in the markets it currently serves — commitment to community. This could be one of their differentiators. Additionally, Hy-Vee has not been shy about focusing on health and wellness, offering quality foods alongside nutritional experts and cooking guides, and innovating (quickly!).

During World War II, U.S. General George Patton declared: “Lead me, follow me, or get out of my way.” The Hy-Vee team recognizes that sitting still is not an option. Personally, I can’t wait to follow their journey and I wish them much success along the way.

Competitors will not be taking this entrance lightly. I expect Hy-Vee will be a worthy competitor – their biggest challenge will be the differentiator needed to set them apart from the others. It will be interesting to see.

Differentiation is key for Hy-Vee as they try to compete against the biggies, Kroger and Walmart, with customer service being a key cornerstone. This will be interesting to watch as all three have South-Central U.S. to Midwestern HQ roots.

I haven’t dealt with Hy-Vee in 20 plus years, so I am not familiar with their reason for moving outside of their current geography. As Aldi and Wegmans expand to new areas, they have unique positions. I don’t imagine Kroger will stand by and let Hy-Vee take business away.

This will be a difficult challenge for Hy-Vee.

Don’t bet against Hy-Vee. The company’s strategy will not be to get into a price war with Walmart, Target or Kroger. Unless you have a competitive cost advantage versus these retailers, a price war makes no sense. The grocer has earned its reputation based on community involvement and legendary customer service. Its real competitors in these new markets will come in the form of Publix and Wegmans. It is notable that the huge Texas market is not a target for this first expansion into a new state in over 10 years. I believe Hy-Vee recognizes the “me too” characteristics of the very successful H-E-B retail formats.

“Who?” However successful Hy-Vee may be in its home market, that’s going to be the reaction wherever it opens. I wish them well, and while I appreciate ambition, this (but overnight, we’re going to go from a regional company to a national company) seems to be on the wrong end of the ambitious/nonsense spectrum.

As well they should! It seems every person I speak with on Hy-Vee in their markets has a love affair with the stores and rants and raves about the quality of products. Let it rip Hy-Vee!

Braintrust
"Although a David among several Goliaths, Hy-Vee has a secret weapon that has proven successful in the markets it currently serves — commitment to community. "

"Don’t bet against Hy-Vee. The company’s strategy will not be to get into a price war with Walmart, Target or Kroger."

"Hats of to Randy Edeker and the Hy-Vee leadership team for commitment, vision, and fortitude."