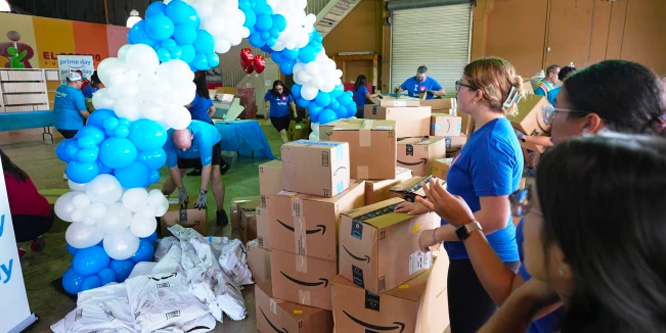 The retail and technology giant said that shoppers purchased more items in what it has labeled as the “biggest Prime Day event” in its history.

Prime members in the U.S. purchased more than 60,000 items per minute during the 48-hour event. Worldwide, shoppers scooped up more than 300 million items during Prime Day, up from over 250 million last year.

Amazon said that third-party sellers were big winners during Prime Day with marketplace merchants’ sales growth outpacing its own retail business. The company said that its “Support Small Businesses to Win Big” sweepstakes was successful, as well. Members spent over $3 billion on more than 100 million items purchased from its small business sellers in the three weeks leading up to Prime Day.

The company didn’t provide Prime Day dollar sales but others have taken a stab at it. Adobe Analytics estimates that Prime members in the U.S. spent $11.9 billion ($6 billion on the first day and $5.9 on the second). That represents a dollar sales gain of 8.5 percent from Prime Day 2021.

Numerator said that the average order during Prime Day was $52.26, up from $44.75 in 2021. Sixty-two percent of those shopping on Amazon during the event placed two or more orders and 16 percent made five or more purchases, according to their research.

Sixty-two percent of those making purchases only shopped on Amazon during the two-day sale, Numerator found. Sixty-six percent did not compare Amazon’s prices with deals offered by other retailers.

This year’s Prime Day took place against a backdrop of Amazon posting its first loss in seven years as the result of higher fuel, transportation and other costs. Amazon’s seven percent year-over-year sales growth was its smallest quarterly increase in 20 years.

Amazon was not alone in running a sales promotion this week. Best Buy, Target and many others offered competing deals online and in stores for consumers to consider.

Adobe said that the average online revenue lift for July 12 and 13 was 141 percent compared to an average June Day. Brick and mortar stores offering online ordering and in-store or curbside pickup saw a 20 percent jump in conversion rates during the two days compared to June.

DISCUSSION QUESTIONS: Did anything around Amazon’s sales performance this week or that of its rivals surprise you in any way? What do you think Amazon and others learned from this past week’s sales promotions and how will it inform their marketing and operational decisions going forward?

"Prime Day used to terrify some retailers but not anymore."

"An 8.5 percent increase over last year for Amazon Prime Day? And average orders up, too? Those are the kind of 'inflation' numbers retailers like to see."

Overall, Prime Day results were better than I expected. Like many analysts, I believed that inflation would stunt Prime sales more than they actually did. I think the key lesson is that the consumer is still buying, and they are responsive to promotion. I suspect that this will set us up for a heavily promotional back half of the year.

An 8.5 percent increase over last year for Amazon Prime Day? And average orders up, too? Those are the kind of “inflation” numbers retailers like to see. It’s hard to think recession when Prime members alone just bought almost $12 billion worth of products over two days. I’m sure the other major retailers saw significant gains, too. By the way, if Amazon adds more days to its Prime Day, shouldn’t we start calling it Amazon Week?

While it doesn’t surprise me that 62 percent of those making purchases only shopped on Amazon, this certainly highlights the value of Prime. I won’t call it loyalty. I will call it comfort, convenience, and speed. It has become a default in shoppers’ minds.

This is more evidence — along with robust demand for travel — that inflation has not curbed consumer spending. Those with a long memory recall that some of the hottest retail increases happened in the late ’70s and early ’80s, the last period of inflation comparable to today.

Although the Fed may crank up interest rates again, it’s hard to reconcile their policies with a looming recession. Employment and spending remain high, and gas prices are starting to recede. (As low as $3.56/gallon here in Wisconsin.) The signs simply don’t point toward a retail meltdown, as long as stores can get the merchandise content right.

I wonder if they sold many more units this year because they put more items on discount? I’m still slightly skeptical of these numbers, but I do think consumers still want to buy, despite inflation. We love a deal, and the Prime Day experience was better organized and more shoppable than ever before. The improvements in their interface and the fact that the site never crashed certainly helped.

Prime Day used to terrify some retailers but not anymore. Over the years we have encouraged independent retailers to host events and promotions of their own. This year the slogan “It’s a prime day to shop locally!” was everywhere and indies reported big days both selling on Amazon and in-store. There is always a way for creative retailers to turn big shopping days to their advantage.

Surprisingly, two-thirds of consumers didn’t shop around for bargains. (Also, I received my orders faster than expected.)

Expect Q4 promotions to focus on electronics, including Amazon items, and household essentials from CPG giants.

Amazon’s performance on Prime Day was impressive given the current economic climate. There may be even more bargain hunters now that inflation is outpacing wage increases.

No surprises here. First, Amazon Prime Day is always a success. Second, the economy is tight (inflation) and the sale prices are right. That makes for a good reason for consumers to wait until the BIG sale to make their purchases.

They did some great advertising, and — the media gave them free props. I have never bought anything on Prime Day before, I found the offerings were rather “drecky.” It was through an industry publication that I found out iPads were on sale for $299. We ended up grabbing up two of them.

I think that Prime Day came as a great relief to shoppers who are bombarded with gloom about the economy and salaries and certainly inflation. Now Prime Day comes and it’s a huge party. Better than that, it’s a great gift to consumers.

The company didn’t provide Prime Day dollar sales. And that is one of the most important performance metrics! Look, I don’t doubt Amazon had a robust Prime Day but these numbers are very general. What was the actual (not estimated) sales increase? What was it in the U.S.? How much of the revenue taken is simply money pulled forward from sales that would happen otherwise? What does the mix look like (it seems more was spent on household essentials than usual)? Is this organic growth or is it share pulled from others? Basically, the trading environment is complex right now and numbers need to be more carefully dissected than ever!

I’d sure like to know more about the mix of the business before thunderously applauding. What do we know about Amazon’s business for the month ahead of Prime Day? What will we know about the month after Prime Day? (Zero and zero.) How much business was pulled into Prime Day specifically because of inflation and the deep desire for a deal? What was the mix of business between “basics” and “novelty” items this year versus last year? Did dollars shift out of novelty and into basics so that customers could stockpile while the deals were available? Way too much missing information to breathe a sigh of relief that inflation is not affecting spending. It’s the composition of the spending and the margin results of the sellers that need to be examined to really understand the dynamics of the two days.

The price-conscious consumer is hunting for a deal, and the Prime Day results make it clear that they found what they were looking for. All in all, the efforts to market macro deals will continue as long as the results are positive. Inflation woes will continue to convert the sale.

Yes, we are still a nation of consumers, who have easy access to credit to fill our numerous desires for products. Amazon’s growth in their Prime Day demonstrates why this continues unabated and will continue to grow like this, regardless of inflation. We have created more jobs than any time in history, which pay more money on average than any time, during record low unemployment. As long as this continues, we can continue to see these types of growth in consumer’s purchasing habits.

"Prime Day used to terrify some retailers but not anymore."

"An 8.5 percent increase over last year for Amazon Prime Day? And average orders up, too? Those are the kind of 'inflation' numbers retailers like to see."