Is Black Friday doomed to extinction? 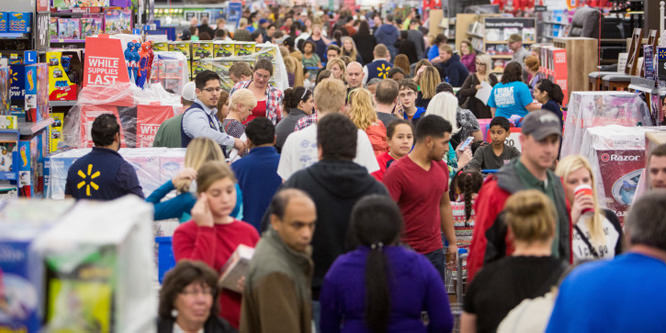 It wasn’t so long ago that retailers felt obligated to open early on the purported busiest shopping day of the year, and customers responded by lining up out their doors. But Black Friday isn’t what it used to be. That’s one key takeaway from the second annual JDA Consumer Survey.

Responding to a survey polling 1,000 shoppers, 47 percent said that they plan to skip 2016’s Black Friday (or Cyber Monday), and 73 percent prefer to do their shopping outside of the holiday season during newer e-commerce deal days like Amazon Prime Day. Even some of those who went out to the stores for deals last year are sitting out Black Friday this year, with 34 percent indicating a change in behavior.

These responses anticipate a further drop in Black Friday shopping that will continue the trend established last year when reports indicated a significant year-over-year drop in brick-and-mortar retail sales.

This apparent shift has led some to ask if Black Friday is losing its relevance entirely. The increasing prominence and ease of online shopping, as well as the introduction of sales even earlier in the holiday season that take the focus off of the specific day, have been cited as reasons for the holiday’s ongoing decline.

Among retailers that have been moving away from the event is Apple, which in 2015 neglected to run Black Friday promotions in their stores entirely. The previous year Apple had begun to downplay the holiday’s importance, backing away from stressful doorbuster sales in the interest of treating their employees more kindly during the holidays.

But the fact that some of those surveyed are eschewing Cyber Monday in favor of Amazon Prime Day for online shopping could point to another substantial shift — to people looking for year-round online deals.

On the other hand, Adobe’s Holiday Shopping Prediction report forecasts that Cyber Monday this year will be the largest online shopping day of all time.

DISCUSSION QUESTIONS: How should retailers approach Black Friday given its apparent waning popularity? Is online shopping the main culprit undermining Black Friday’s significance or do you see other causes?

Please practice The RetailWire Golden Rule when submitting your comments.
Braintrust
"With the always-discounted retailer always available, the substance of Black Friday is gone, even if the marketing is still around."

"You know, I don’t say this too often but I’m going to say this now — every single retail watcher did the same — “We told you so.”"

"While the reports of the death of Black Friday are greatly exaggerated, there is no doubt that it’s lost importance on the retail calendar."

21 Comments on "Is Black Friday doomed to extinction?"

Retailers have no one but themselves to blame for the upcoming demise of Black Friday. Running specials before that day and opening on Thanksgiving took away the magic, excitement and pain of that day. They can bring it back if they want to.

The only thing that makes Black Friday is the deals. If you offer them consumers will come but if you offer them on other days, the consumer has choices. It’s that simple!

When the deals went online and started to bleed into the day before, the day after, the week after, Black Friday stopped being a short, sharp moment of shopping excitement. It’s still there but dissipating rapidly. I wonder when Prime Day will overtake it as a sales spike.

The photo perfectly captures the erosion of a quality customer experience that has in part been driving consumers online. Black Friday is an invented “event” in which the discovery and deals that make shopping fun make it a good idea turned bad. Black Friday, being primarily about retailers’ success, is taking the physical shopping experience in the wrong direction, accelerating the challenges of physical retail success.

The basis of Black Friday is long since dead — the kick-off to the holiday season on a four-day weekend. E-commerce wounded the goose that laid that golden egg, but the year that retailers opened on Thanksgiving they killed it once and for all.

Now every day is a sales day. You know, I don’t say this too often but I’m going to say this now — every single retail watcher did the same — “We told you so.” We watched the industry commit Hari-kiri.

Black Friday at one time was a treasure hunt for folks who love this madness and it has lost its appeal, big-time. Online has taken over by matching the deals, and customers never have to leave the house. Plus the out-of-stocks on the insane giveaways ruined it as well. I personally never did this, as I waited till the week before Christmas and got even better deals. Like many insane things in retail, this too shall pass.

Black Friday existed before Amazon, Groupon and Pokemon as a way to juice sales with discounts. With the always-discounted retailer always available, the substance of Black Friday is gone, even if the marketing is still around.

Black Friday sales will not disappear. They are too important to many retailers and many consumers love them. For everyone else, there will be sales throughout the year and some special days, like Amazon Prime Day. Retailer practicality and e-commerce led to the erosion of Black Friday, so retailers with adapt accordingly, but some form of Black Friday will be with us for years to come.

For whom the bell tolls. When will retailers stop this nonsense? The shopper control is pervasive and even Prime Day will have its troubles soon enough. I’d like to see retailers surprise shoppers with some well-trained real humans to help me find new and unique items that might actually surprise and delight my family.

In a world where the holiday displays go up before Halloween, Black Friday has clearly jumped the shark as a marketing tool. And yes, as others have noted, this is a mess of retailers’ own making. It isn’t online shopping that is killing Black Friday, it’s the fact that consumers have caught on to the hustle. Look how many people do their “holiday shopping” after the holidays or even the New Year to capture real discounts. As an industry we’ve beaten consumers up with the idea that the most important elements in any transaction are item and price and … guess what? … after 10 decades of broadcasting the same message, even the slow kids catch on.

Good point Ryan that we (as Westerners) are “on to the hustle,” but the tussle and jostle of shopping experience is a normal part of cultures in Asia, India and elsewhere, which makes the point that what is acceptable to some is a turn-off to others. Black Friday at physical retail tells shoppers, “this is how our bread is buttered,” get on board or get out of the way to find your deals in another way or elsewhere.

While the reports of the death of Black Friday are greatly exaggerated, there is no doubt that it’s lost importance on the retail calendar. The shift to e-commerce is part of the reason, but the bigger cause is retailers’ greediness in pushing their “early bird” hours earlier and earlier and finally opening on Thanksgiving itself.

My long experience working for a company that knew how to “nail” Black Friday tells me that the event was once as much a social occasion as a way to hunt for deals. Opening earlier and earlier never seems to result in more net sales but actually becomes counterproductive when any sense of urgency about “early birds” flies out the window.

… and to add to my other thought, the expanded hours, all-night openings and Thanksgiving shopping can do nothing good for the morale of store associates and managers.

As long as retailers want to make Black Friday relevant by offering huge deals, the public will be there to knock down the doors. If retailers learned to forget the greed and fear of being outdone by the competition Black Friday could become a sales day with none of these openings before the sun comes up. It’s almost like the meal is over and the dishes are done so let’s get in line. This is what I object strenuously to. Retail employees deserve to spend the holiday with their family.

I tend to agree with the previous comments, particularly that Black Friday’s birth and death were misguided/guided by a discount mentality. Having said this, there is still an opportunity to reach out to those shoppers who shop special days: Black Friday, Cyber Monday and the last Saturday before Christmas. The challenge is to decide what job each of these days is best designed to do: promotional pricing, social interaction, last minute shopping, etc.

One lesson apparently learned by retailers is that Thanksgiving openings contribute little to the overall weekend sales and have a deleterious effect on associates. Perhaps we can put openings on this day into the vault of failed retail experiments.

With Black Friday promos taking place virtually all year long, the phenomenon can’t help but lose relevance. Quite simply, merchants need to be in touch with the very latest pulse of the market for their audience, and create compelling offers for them to capture their wallets … regardless of what day or channel they shop.

If you look at the figures, instead of the opinions, Black Friday is doing just fine online.

As with all retail, Black Friday is doomed only to change. Its importance may diminish. But it’s not going away. It will be with us forever as a retail holiday during the holiday season. Retailers don’t let sales holidays die — even if they should.

Retailers and shoppers are discount addicted which has led to the elongation and blurring of traditional shopping dates. This year, Office Depot even kicked off Black Friday in advance of Halloween!

As savvy retailers know, this constant run on margins is simply not sustainable. While some have resorted to their own shopping holidays — Amazon with Prime Day and Alibaba with Single’s Day — virtually all celebrate “micro-shopping” dates like Black Friday. So, as long as Thanksgiving exists, Black Friday will have relevance, but it is now just one of many “must-shop” dates and sorely in need of a reinvention.

At this point Black Friday as a sales draw has declined because of dilution. When you open the store at Thanksgiving it reduces the impact on Black Friday and when you can buy online rather than fight the stores, only the hard-core margin killing bargain hunters are coming to the store. If retailers want to kick off the Xmas shopping season, do something on Black Friday to draw the crowds other than steep discounts … maybe it is new product introduction, entertainment, etc. Or just give up the idea and do what Costco or Apple does, it is just another shopping day.

Braintrust
"With the always-discounted retailer always available, the substance of Black Friday is gone, even if the marketing is still around."

"You know, I don’t say this too often but I’m going to say this now — every single retail watcher did the same — “We told you so.”"

"While the reports of the death of Black Friday are greatly exaggerated, there is no doubt that it’s lost importance on the retail calendar."