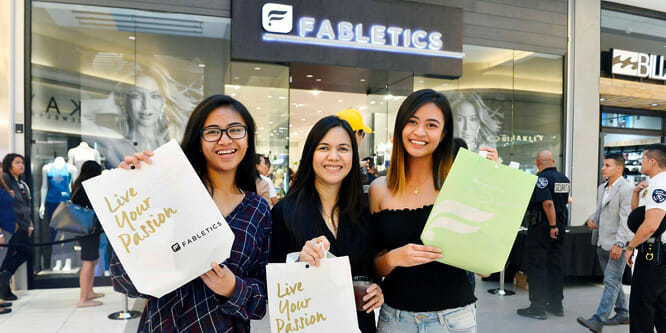 As retailers continue to determine what the ultimate role of the physical store will be in an omnichannel world, they’re discovering that brick-and-mortar stores can tell them a lot about how to run their e-commerce operations.

Athleisure company Fabletics is one retailer that’s been using store data to inform its overall strategy and online presence, a concept VP of Retail Ron Harries called “brick mining” in an article on Marketplace. The company, which began as online-only, has found itself getting to know its customer through physical stores in a way not possible online. The retailer is able to collect data on what consumers try on, like and don’t like through touchscreens in smart fitting rooms. Fabletics has found that online sales increase 2.5 times within a 30-mile vicinity of anywhere they open a physical store.

Fabletics is hardly the only pure-play e-tailer that has recentlhy found value in having a physical presence.

For instance, apparel retailer Bonobos, once an online-only brand, began opening physical “guideshops” throughout the U.S. in 2011 and now has almost 50 locations. (In June of this year, the company was acquired by Walmart.) And in 2015, GameStop acquired online-only licensed geek gear purveyor ThinkGeek and began pursuing a brick-and-mortar strategy for the brand.

Pop-up malls that showcase online-only brands have also grown popular. Such locations enable customers to see, browse and showroom products that they would otherwise have to take a website’s word on.

And, of course, e-tailer Amazon has taken a couple of high-profile steps into the physical world. With last year’s creation of Amazon Books, Amazon began using information on what books site visitors were buying and to inform its selection on physical shelves. In the summer of 2017, the company’s acquisition of Whole Foods indicated that even an online business on the scale of Amazon required a brick-and-mortar toehold to compete in grocery.

DISCUSSION QUESTIONS: Does the customer data that physical stores produce alone justify an online-only brand opening physical stores? What sort of data should stores be collecting to maximize their “brick mining” value?

Please practice The RetailWire Golden Rule when submitting your comments.
Braintrust
"It seems like brick-and-mortar stores do a lot more than that."

"I don’t think that in-store behaviors tell you that much about online retail preferences..."

"It does seem that “Who is My Shopper” may not be found through clicks and likes alone."

One need only look at how in-store customer feedback has fueled Zara’s growth to answer this question with a simple but resounding yes — brick mining is enough to justify investments in brick-and-mortar.

A single perspective and/or point of view is never enough to justify a financial commitment for anything. An online-only brand opening a physical store has a truly unique opportunity. The initial physical space should be implemented in a way as to become a real-world working store “lab” environment. All traffic patterns and merchandising locations should be measured. All products should be tracked and monitored with 100 percent accuracy and transparency. Monitoring and analyzing results will provide invaluable insights allowing you to optimize the store planogram and merchandising process and flow.

Traditional methods of hiring a retail design firm and building from a rendered drawing are extremely risky. Implement an environment that allows you the flexibility to measure, adjust and optimize on a continual basis in order to bring the best, most valued experience to your shoppers.

If you start with the premise that the more you understand about your customer, the better you can serve them — then it makes total sense to fulfill customer needs at as many touchpoints and via as many business models as can be justified. Subscription services I think are offered for similar reasons — it’s as much a data collecting and analytics means as anything. The data you can collect in a physical store is today very similar to what’s possible on a website — using IoT technology like sensors, cameras, interactive displays and beacons allows retailers to instrumentalize their stores just like a website. So you can monitor inventory, target promotions and optimize store layout. It gets even better when you put that data to work with tech like interactive chatbots, clienteling by associates and mobile shopping assistants for your customers. Coming back full circle, you must understand how the in-store shopping experience fits within your customers’ overall journey — so having that vaunted 360-view of the customer becomes critical to realizing the full… Read more »
0
|
0
-   Share

It’s a tough question to answer. The metrics have to be analyzed in great detail in order to make that determination and are sure to vary from one business to another because of differences in the effectiveness of execution.

Of course not! I’m as strong a proponent as anyone for retailers to fully leverage point-of-sale (and other in-store) data, but that’s not reason enough to have physical stores. So the question is a bit absurd as it is phrased here, but I do hope that all retailers will make it a high-priority New Year’s resolution to start using their data more effectively. My advice:

Thanks, Peter, for one of the wisest comments on this whole channel discussion I’ve ever read. Data is a means, NOT an end … which is a fatal mistake so many retailers make.

Physical stores are much more than behavioral research stations for online merchants. You are so right about this, Peter. The accumulated experience accrued since the Web went worldwide repeatedly demonstrates that bricks and clicks can and should be symbiotic. Each addresses different need states at different moments. Combining information from both domains should yield far richer insights than either on its own.

Stores can be on-ramps to introduce and showcase the brand, build trust, and provide service experiences that persuade shoppers to become buyers. They should be profit centers on their own, even as they contribute to greater shopper insights and help distribute the brand.

It seems like brick-and-mortar stores do a lot more than that. In fact, I would generally argue the opposite … it allows customers to “mine” or get to know the products and the brand.

I think of Warby Parker for example, which was doing a lovely job disrupting the eyeglass business as a pure-play. But they have opened stores in target neighborhoods so people could find out a.) how good their service really is, b.) how nice their glasses really look on the face and c.) how easy they are to work with.

Unfortunately, their glasses don’t seem to work as well with progressive lenses, otherwise I would be a customer for life.

So I think we have this a bit backwards.

The data collected from brick-and-mortar stores is unique from online transactions — time spent trying on items, decisions for one item as opposed to other items tried on or looked at and questions asked about items. Whether this data is useful enough to justify the investment depends on the retailer. However, I believe this data is so valuable for monitoring the purchase of the retailer’s items that it would be worth opening even one store to gather the data.

The types of data that should be collected are feedback as to why the consumer decided to purchase or not purchase an item including size, style, color and price. Also, an assessment should be made with the consumer feedback as to how difficult the product is to understand from just a picture and description online, based on the selling process in the store.

I don’t think that in-store behaviors tell you that much about online retail preferences because I am in a physical store for a reason that is already differentiated from how online serves my needs. Retailers need to stay at a higher level to remain consumer-centric. How do I shop? Why do I choose to go online sometimes and in-store other times? What are the motivating moments?

I personally happen to be buying a lot of stuff right now because we are buying a second home in Florida and have nothing — no furniture, electronics, smart home, drapes, etc. — for it. So, n = 1, but I can tell you everything I am buying is a mix of online and in-store behaviors. I shop online and in-store and buy things three ways — online, in-store and by calling the local store once I know what I want and ordering it over the phone with a salesman. So net/net, the question implies a compartmentalization that will continue to break down over time. Ask consumers!

Nothing beats observing and learning from physical human behavior in how we shop, consume and buy, to apply to ANY transactional channel. The data that can be gained from shoppers that haven’t engaged or interacted yet can is a great layer of additional context added to other datasets to complete a 360° view of how shoppers become consumers. Heat mapping, Advanced People Counting, etc. add a level of vision to things like e-commerce that if applied correctly can yield tremendous financial benefits.

It does seem that “Who is My Shopper” may not be found through clicks and likes alone. Learning the value of understanding your customer through data is something that many “loyalty players” learned a long time ago. If there is enough new learning on behavior and if the outlets can break even, then it is a no brainer.

Data is useful, but of course it is not the only reason retailers should open brick and mortar locations. Fabletics is an interesting case because they were transparent about where they were opening stores. They chose to open up shop in areas where online sales were strong. This will help them foster stronger relationships with current customers and gain new customers as well. The data that will be helpful for all retailers with new brick and mortar locations relates to customer preferences and behavior. What resonates best with customers (from pricing to assortment)? What kind of experiences encourage them to come in and make a purchase? Having customers in-store is invaluable, partially because of data you can mine, as well as providing an experience that will encourage them to check out across channels.

I believe we are at an unprecedented moment in retail. Our appetite for knowing our customers is whetted by the information we get from ecommerce. The more we can learn about what happens in our stores, the better. We have a unique opportunity to put real data points along the customer journey and validate what we know and think we know. Or better yet, learn something new that can affect assortments, pricing, presentation, staffing and maybe even operating hours. I advocate looking at the online/in-line continuum from the consumers’ perspective. The original use of the term “omnichannel” referred to how consumers view their shopping and purchase behavior. They see it as one channel, or better yet, they see it not in the terms of channels at all, but in desire and need; procurement and experience. So we should be seeking to understand their experience with our brands and stores. With emerging technology, we’ll be able to better understand our stores efficacy both from a customer experience and a square footage performance perspective. But as in… Read more »
0
|
0
-   Share

Braintrust
"It seems like brick-and-mortar stores do a lot more than that."

"I don’t think that in-store behaviors tell you that much about online retail preferences..."

"It does seem that “Who is My Shopper” may not be found through clicks and likes alone."