Is Macy’s about to be sold? 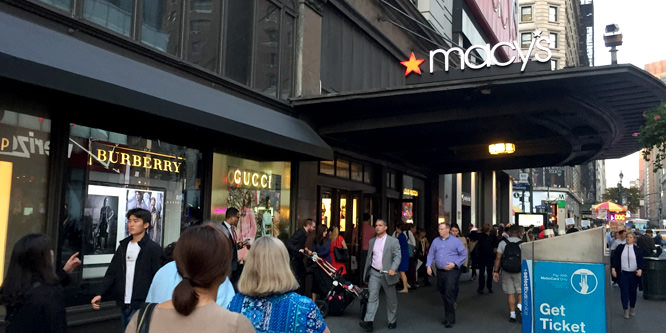 An unspecified number of retail industry sources have been approached about a potential sale of Macy’s, according to the New York Post.

Among the potential suitors, the tabloid reports, are Hudson’s Bay Company, which owns its namesake chain, Lord & Taylor and Saks Fifth Avenue. An unnamed real estate investment trust firm is also reported to be working with a private equity firm in considering a pursuit of the nation’s largest department store chain.

Macy’s is said to be sending out discrete feelers to potential buyers in reaction to strong-arming by activist investor Jeffrey Smith. Since acquiring a stake in Macy’s in 2015, Mr. Smith’s Starboard Value hedge fund has been pushing the retailer to unlock the value of its real estate holdings.

While Macy’s has taken steps to monetize its real estate — it owns roughly half its stores — the pace does not appear sufficient for Mr. Smith who is seeking more seats on the retailer’s board of directors.

Terry Lundgren, chairman and outgoing CEO of Macy’s, Inc., has been consistent in his remarks that management has a plan in place that will enable the company to rebound and grow its market share again. Mr. Lundgren, if the Post report is correct, would rather sell Macy’s “than deal with Starboard.”

Macy’s, which saw its same-store sales decrease 2.1 percent during the Christmas selling season, announced last month that it would close 68 stores and cut roughly 10,000 jobs.

Even after announcing plans to close stores, Mr. Lundgren has continued to assert that Macy’s plan will pay dividends for the company’s stakeholders.

“Our omnichannel strategies continue to evolve based on the changes in our customers’ shopping behaviors, including a focus on buy online, pickup in store and mobile-enabled shopping. In addition, we have invested in and enlarged our customer data and analytics team, which will help drive our new marketing strategies for 2017,” he said last month. “Whether it is improving corporate agility, enhancing our customer engagement strategies, or continuing to capitalize on the potential value of our real estate assets, we remain focused on the actions that will ultimately improve our financial results and provide the greatest return for our shareholders.”

DISCUSSION QUESTIONS: Do you think Macy’s will be sold in the near future? What companies do you think would make the best suitors? What will any potential suitor need to know about Macy’s before acquiring the company?

Please practice The RetailWire Golden Rule when submitting your comments.
Braintrust
"I have confidence in the legacy of Macy's and the iconic value of the brand."

"Macy’s will not give in to the real estate issues — they are dedicated to their customers and the brand is still strong."

"Hedge funds it seems are only interested in wresting the legacy value out of retailers."

I can appreciate Mr. Lundgren’s concern with his activist investor. I’ve said before that if Amazon had one of those on its board, AWS would have been split out into another business already.

But finding a buyer for a chain as large as Macy’s? That’s a tall order, and any buyer would likely be doing the same kind of real estate play.

I really wish Macy’s the best of luck in staying as it is.

Hedge funds it seems are only interested in wresting the legacy value out of retailers. Take a look at most any retailers that recently closed because they couldn’t service the enormous debt they became saddled with. If someone did buy Macy’s, which I’m still not sure is happening, I would expect any new owner to more aggressively close stores or sell off pieces.

The value of Macy’s has certainly come under pressure — as with many established retail operations. Not sure a viable suitor will emerge that could effectively preserve the heritage of this department store or fully-recognize the value of its real estate. My advice is stay the course, refine operations, improve the experience (in-store and online), and begin to attract new shoppers. I have confidence in the legacy of Macy’s and the iconic value of the brand.

I think I understand the wide-eyed wonder in evaluating Macy’s balance sheet and wanting to unlock all that value. It’s gotta be irresistible to a real estate player. Unfortunately that does nothing in and of itself to solve the dilemma of fixing Macy’s role in the mall. Sears has been plundered in the process of unlocking value. It may not ever have survived as a soft-goods retailer, but it certainly could have had a long-term role as a hard goods retailer. So now Macy’s balance sheet can be plundered. To what end? Another carcass at the other end of the mall? I worked at Macy’s. I love the place. The most vibrant department store around in its heyday. I vote that they take the five years they will need to re-invent themselves and their role in the mall. (And they will need an intact balance sheet to do that.) The last thing I wish for Macy’s is to stay as it is.

Perhaps I’m just tired at the end of the week but I have a hard time recalling retail buyouts the size of a Macy’s that have been successful. Even for smaller retailers, it’s not a long list. Of course, having started my career when Macy’s was still Macy’s (I’m that old), this brings up the ill-fated LBO that changed Macy’s forever. It’s never fully regained its true excellence since 1986 and it’s hard to see another turnover changing this course. That said, Hudson Bay Co. is one of the better ones so we will see. Wishing all of our friends there the best of luck!

I imagine the frustration of Terry Lundgren, CEO, Macy’s when he said in January 2016 that “Department stores must be a place for customers to come and get away from the everyday challenges in their lives, and to be entertained while they shop.” He was reflecting a retail vision that board members and shareholders with a marketing and brand-building focus would appreciate, respect and support. When ships are steered based only on near-term economic decisions, the shoals and those ready to pounce and plunder await. Brand equity represents about 20 percent of the value of S&P 500 firms, about $4 trillion, versus the 16 percent of tangible assets and the 64 percent in patents, processes, talent and distribution network. Damn you Wall Street, how about building on assets rather than fulfilling M&A fee greed.

Not in the near future, but it will be sold. It is no longer a viable business in its current format.

It may be picked up by hedge funds who know nothing of retail AND are lured by the cash flow, e.g., Lampert or Ackman. Or maybe not, perhaps that breed of cat is no longer so curious.

Despite the mistaken appeal of a legacy brand, it is what’s inside that counts. And while Macy’s has some notable assets, the reality is that massive department stores are irrelevant to most of the U.S. I would imagine its most ardent believers are in and around NYC.

While I’ve banged the drum of doom for a while, I am surprised at the fragility of this retail sector. As I detest grave dancing, I will not sign out in my usual way. We are talking lots of jobs, proud careers and a magical institution for many Americans.

Hedge funds and Terry do not mix and fast change is not Macy’s best talent. Macy’s will not give in to the real estate issues — they are dedicated to their customers and the brand is still strong. They are making major changes and the overall performance of their shop will improve this year. With Jeff coming on board and Terry refocusing we will see a strong retailer that can beat the mall issues and the hedge challenges.

This reeks of familiarity, and remember how that turned out? Mr. Lundgren knows the evolution that needs to take place and, given appropriate time and assuming we don’t undergo another economic meltdown, will most likely get the company there.

A wounded albatross, bleeding in the water is a sure attraction for the sharks. Somehow an ancient behemoth is kind of like the “Pacific Princess” (Love Boat) as a glorious ship in her hay days, but now headed for the scrap yard. It never changed with the times, did not move online and has been swamped by the likes of Amazon. So if they do find a buyer, what will the buyer do with it? The same money would give greater returns with a new concept, so as with the “Pacific Princess” the money to refurbish could build a newer, more modern “ship.”

A better question might be “SHOULD Macy’s be sold?” I.e. Is a new owner/management likely to do a better job than the current crew?

It’s possible in theory, of course, but the real world record of forced sales/hostile mergers in retail — from Campeau in the ’80s right up thru Lampert today — doesn’t inspire me much.

Spinning off Bloomingdale’s might make sense — long-time readers will know I’ve shilled for this idea for years — and of course Chicagoan’s — some of them, anyway — would like to see Marshall Field’s reborn, but I’m not sure how much these type of localized surgeries will help. As everyone knows, “real store” retail faces challenges, and no amount deck chair arranging by impatient “investors” is likely to change that.

Macy’s Herald Square has always been magic. The emotion of Macy’s magic does not exist outside of NYC. The magic of marketing and merchandising fashion over time has transitioned to coupons and uninspired, cluttered floor sets. I agree with Lyle Bunn, M&A greed has and continues to extinguish great American retailers. M&A greed squelch’s the ability to execute the magic of marketing and merchandising fashion.

Wow! Great responses so far, as usual. I agree with Ms. Holcomb that M&A greed has the potential to continue to destroy great institutions, and Macy’s is no exception. I do not blame Mr. Lundgren for seeking the possibility of a sale. He and his team have worked really hard, only now to see it all potentially undone by people interested in a (possible) short-term gain. Like Mr. Kelly said, we are talking about thousands of employees and careers here. Macy’s has the ability to be great again, so we are all singing her praises. But that takes time, talent and patience and that is definitely not compatible with unlocking value. Like Mr. Sundstrom reminded us, remember the disaster of Campeau! (COMPLETELY destroyed Allied.) And Mr. Lampert and poor poor Sears — another mess. (Like Mr. Sward pointed out, Sears could have been the best hard goods seller in the country!) If the right buyer can be found, it may be the right thing. This is a TALL order though, given the size of the… Read more »
0
|
0
-   Share

Braintrust
"I have confidence in the legacy of Macy's and the iconic value of the brand."

"Macy’s will not give in to the real estate issues — they are dedicated to their customers and the brand is still strong."

"Hedge funds it seems are only interested in wresting the legacy value out of retailers."