Is nepotism all that bad for retail? 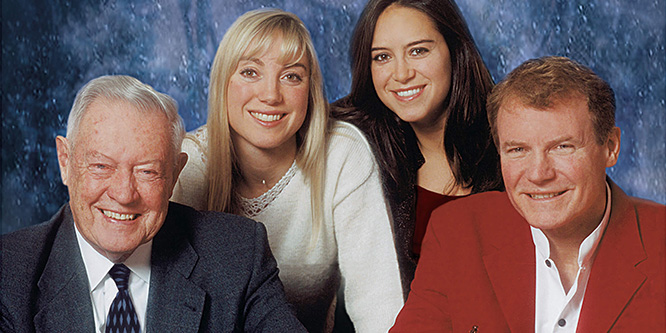 Nepotism has been in the limelight lately as Hollywood stars have had to defend themselves or their children over gaining an unfair advantage from family connections.

The phrase #nepobaby (nepotism baby), steadily trending on social media, calls out and often shames the children of famous actors, sports figures, musicians and other artists whose careers have benefited from their parent’s contacts. In many cases, their talent is questioned amid suspicions their stature is not due to merit.

He told Entertainment Tonight, “The shoe industry is a family business. The car industry is a family business. I think my kids are all like Renaissance artists, you know? [They] are good at whatever they choose to be. But the question here is, can you make it stick? You’ve got to have a passion, you’ve got to have a drive. And yeah, our household has existed in the company town that is Los Angeles. Success is a combination of talent, perseverance, drive and no small amount of luck.”

Nepotism is seen as rife in retail with many smaller and some larger stores led by families.

In a recent column for Bloomberg, economist Allison Schrager argues that while there’s a “long history of children running family businesses into the ground,” it’s also an “efficient transfer of valuable human capital.”

Many individuals benefiting from nepotism have honed their skills under the guidance of their parents. He wrote, “There is value in working in the same occupation as your family, and that needn’t be unfair or harmful in an economy where success is not zero sum.”

Mr. Schrager also noted that it has become easier to monitor productivity and competence to ward off the “worst parts of nepotism.”

A recent extensive study from University of Cambridge found having a family CEO in charge, especially in smaller firms, can boost positive emotions in employees and lower turnover. The hereditary claim was seen creating a stronger bond to the business versus hired professional CEOs.

DISCUSSION QUESTIONS: Is nepotism at family-run businesses and elsewhere at retail a problem? What’s your thoughts on limiting the downside and capitalizing on the upside of nepotism?

Please practice The RetailWire Golden Rule when submitting your comments.
Braintrust
"Where I’ve seen the most damage is in multi-generational family businesses where cousins start factionalizing the company."

"...we didn’t talk about sports or politics at our dinner table like normal families. We talked about how (fill in the name of a supplier) was trying to screw us over that week"

"A privately owned family business has high incentive to preserve and protect its health and legacy."

18 Comments on "Is nepotism all that bad for retail?"

As my Italian mother-in-law says, nepotism in retail “Could be good, could be bad.” I have worked with many retailers – large and small – where family members have “inherited” leadership positions. As the saying goes, some were very effective and some, well, not so much. The ones that typically worked best were those who hired independent boards for accountability and oversight.

Nepotism exists and will continue to exist. It can also be good or bad. I like the idea of an independent board to ensure accountability.

Our furniture backgrounds are showing. I was going to say the same. There are some businesses that have “tricks” that are best taught across generations. Others, like all “long-time” retailers, just fall into the “this is how we’ve done it” trap.

Shared backgrounds, indeed … and I know we both have some stories! LOL

It very much depends on whether the parent leaves the business to a well-trained,well-prepared offspring, or the idiot child. I’ve seen both.

Better question — how is your company at succession planning? As Dave pointed out, it could be good or bad, and probably is mostly in between. In my family’s business, navigating generations when it comes time to pass the company along is one of the biggest challenges — and that is true for any family business. And it gets more complicated with each generation. My advice is to understand the goals of the company, then decide if family members are the best choices to achieve those goals.

Well, it does reduce recruiting costs. In theory, a business owner wouldn’t want an incapable person in a critical role. Where I’ve seen the most damage is in multi-generational family businesses where cousins start factionalizing the company.

I agree with Dave (and his mother-in-law) that there is no right answer to this question, especially as it pertains to privately held companies. It’s easy to understand why founders want to pass the business along to their children — if they’re interested and have the right skill set — because those relatives “grew up in the business” and hopefully absorbed what’s best about the company culture.

Those private businesses still need good governance and oversight (even more so with public companies, of course), so nobody’s family member should feel entitled by DNA to run an operation into the ground.

There are many examples where the children outdid the parents and built billion-dollar businesses from a small start — Mars, Walgreens, LEGO, Perdue — so it goes both ways.

Too often a business becomes successful because of the drive and dedication of its founder, but the sacrifices that founder made don’t translate into equal drive for their children — even less so for grandchildren.

Growing up in retail is a unique experience. My grandfather and father were both supermarket owners in New Jersey and the joke I tell is that we didn’t talk about sports or politics at our dinner table like normal families. We talked about how (fill in the name of a supplier) was trying to screw us over that week. If nothing other than through osmosis, we kids came to understand many of the nuances of the retail business.

Certainly, executives who don’t have the benefit of that early learning can become successful at the more intuitive parts of the business. It just takes time and experience, and that isn’t always available.

Seems to work when you think about it, Nordstrom being a great case in point. I wish Les Wexner and Mickey Drexler, etc., had heirs to their business thrones — maybe specialty retail would be in a better place.

I have had lively discussions with theater friends who aren’t thrilled when actor Ben Platt is cast in one of his father’s productions. But Ben Platt is a talented actor with a beautiful voice, so why shouldn’t he be cast if he’s right for the part?

I know retail families with large stores that compete head to head with big box chains, where the next generation has taken over the reins. After college they were required to work for other retail companies to gain real world experiences before being hired to work in the family business. They were not handed the stores on a silver platter, they had to work for it. I have also seen stores handed over to adult children who had no idea how to run a store, except into the ground.

Nepotism is a good thing provided the next generation is given the direction, training and responsibility needed to run the company. And if they’re not talented in retail, they should be steered in a different direction.

The answer is really a very common one — “it depends.” There is significant value possible from passing the company to the next generation as the generation has grown up immersed in the issues and challenges of that specific business. This can be exceptionally important. On the other hand, there’s the randomness challenge around whether the next generation has the personality and interest to do well.

What we need to compare this with is the random failure of hired CEOs. Passing a company from founders to hired guns succeeds less often than we tend to think. It’s difficult either way — after all merely to do business is to take a risk.

As my learned friends here have noted, yes and/or no depending on the family. Fred Meijer inherited his father’s business and look what he built. Ditto for folks like Drayton McLane, Jr. and Danny Wegman and a long list of other successful nepobabies. But we all have horror stories of relatives that have ruined or negatively impacted retail companies. As for mitigating genetic power, you can form a board to oversee things, depending of course how much control the family has.

Tom rather guided the answer here by his choice of terms: “nepotism” generally means favoritism and undue influence. So by definition, it will be a negative. That’s not the same thing, though, as saying family businesses are a bad thing; there are good and bad examples, as with anything … the incompetent people who “run … a family business into the ground” will claim that the existence of the former means they are one of them, evidence notwithstanding.

Is nepotism all that bad for retail? Not as long as the nepotee does the work.

Braintrust
"Where I’ve seen the most damage is in multi-generational family businesses where cousins start factionalizing the company."

"...we didn’t talk about sports or politics at our dinner table like normal families. We talked about how (fill in the name of a supplier) was trying to screw us over that week"

"A privately owned family business has high incentive to preserve and protect its health and legacy."