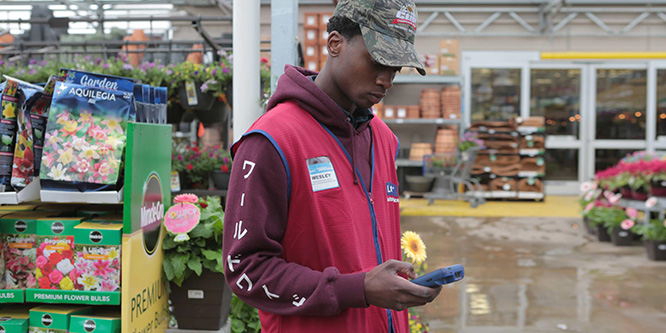 Lowe’s is giving full-time workers in its stores the choice to schedule four-day work weeks.

The home improvement made the decision after its five-day schedule left many associates complaining about an inability to find a balance between their personal and work lives as a result of having very few consecutive days off, reports Business Insider.

Lowe’s in 2019 instituted a program that gave workers a full weekend off every eight weeks. As a result, there were very few weeks when workers had consecutive days off. Complaints about the system led Lowe’s to offer standard five-day shifts for workers with more weekends off.

Workers continued to complain about the scheduling, which combined with short staffing levels and high customer demand caused many to feel physically, emotionally and mentally drained on their days off.

Lowe’s and other retailers continue to operate in a business environment where workers have the upper hand in negotiations, despite some recent layoffs, primarily in automotive and tech, that some believe indicate the beginning of a shift back to companies.

A recent Wall Street Journal article noted some of these developments, but pointed to five factors that make it likely that the ball will stay in the workers’ court for the time being. These included the fact that open positions are currently running 54 percent higher than during the same period in 2020. Job openings remain higher than the number of workers available to fill them and the number of part-timers looking for full-time jobs fell by more than 700,000 last month.

In a new survey from Legion, 85 percent of hourly workers said that it’s important for them to have control over their schedules. Their managers, by and large, feel the same, with 63 percent saying that giving hourly workers more input into their schedules is the biggest incentive they have to offer when recruiting new employees.

Apple, according to Bloomberg News, in early June told store associates it would provide more flexible scheduling going forward. Changes include imposing a limit of three days per week that workers are allowed to work past 8 p.m. and reducing the number of consecutive days they can work from six days to five.

DISCUSSION QUESTIONS: How popular do you think a four-day work week will be for full-time associates working in stores? What will this system mean for stores seeking to schedule part-time help?

Please practice The RetailWire Golden Rule when submitting your comments.
Braintrust
"This move is long overdue and I hope the rest of retail takes notice."

Yes, I believe this will be popular and other retailers will consider implementing. Aligning frontline staff with store traffic is critical to driving conversion, and while a four-day schedule may make this somewhat more challenging, I believe that the upside comes from having happier, more engaged employees, and that’s what a four-day work week and schedule flexibility can help provide.

Dealing face to face with customers can be mentally and physically exhausting, especially in a warehouse environment where staff must be ready to help with hundreds of different customer needs and walk thousands of steps a day. Lowe’s is smart to keep experimenting to find what works best to give their staff the down time they need to avoid burnout.

The option? That’s funny! I think, expense wise, we’re at the beginning of figuring this all out — almost like marketing: does it help you recruit and retain? Will it create a better “vibe” on the sales floor? And what is that worth comp’d to the cost of a “free” day? Hats off to Lowe’s for testing the waters, but the book is still out on this one.

The 4 day schedule will be very popular. It is used in several other industries and has been proved to reduce transportation and day care costs in addition to the ability to add free or family time. This will also fit well with the Lowe’s employee who wants a day or two to work a different job on the side.

A four-day workweek will be very popular among most hourly employees. Additionally, Many HR/Scheduling software systems offer hourly workers the opportunity to select their schedule preferences, such specific shifts, specific days-of-week, etc. If properly applied, these systems can represent a significant improvement in employee satisfaction, morale, and ultimately, customer service.

Extremely popular! Good for Lowe’s and I hope other retailers will follow suit. If Lowe’s hasn’t invested in a solid scheduling software system, I’d advise them to get one quickly. They’ll need it to address some of the complexity that will arise in managing the new allocation for employees. If Lowe’s does this right, they will see a significant increase in morale, engagement, and perhaps even longevity/loyalty.

As we are slowly entering a post-pandemic world, corporate and store-based associates seek more balance in their lives. In theory, the four-day workweek has significant benefits. It is a very attractive offering that will enable associates to be far more productive while on the job and have a more balanced lifestyle with their families.

Any customer and client-facing role could be relentless, and associates and corporate workers are expected to be on their game. This model has clear benefits and creates new complexities in terms of scheduling and work effort allocation. It will all come down to execution to determine if the four-day work week could be a successful model.

This move is long overdue and I hope the rest of retail takes notice. As someone who worked in stores for 15 years early in my career, getting two days off in a row was unheard of. Retail is tough work on the front lines, and giving workers time to regroup and recover would be a huge benefit for both the store and the employee.

For associates, I think this will prove very popular. For Lowe’s, I think it will help with recruiting. But, as others here have noted, I suspect it presents new scheduling challenges that they will have to work hard to overcome, including possibly hiring more staff to cover their needs.

I don’t think asking if this will be popular is the right question. The right question is, will this make Lowe’s a more attractive workplace, and how will this help retain team members? If it checks those boxes, that’s a win.

I don’t think this will have much impact for part-time positions. It might change shifts a bit to cover the extra days, but that time will come from added two hours per day.

Yes, four-day work weeks have already proved to provide benefits in other industries and in other markets around the world. The benefit from the one less commute in gas savings and time savings is, by itself, valuable. Once you add in the opportunity to have a third whole day of flexibility in retail associates’ lives, it can be a no-brainer for many who are juggling various life commitments. The questions are really more about the outcomes of this strategy on the employer side, like the actual increase in productivity and overall enhanced morale in the workplace.

Retail scheduling is tricky. I suspect it will be popular. Yet it also sounds like Lowe’s is playing a game of Whac-a-Mole in trying to set up a structure that satisfies the most employees.

What concerns me here is it sounds like consecutive days are more critical to employees than numbers of days. Will be interesting to hear what unexpected consequence comes from this move.

Lowe’s is smart to listen to employees and make changes to scheduling policies that can improve working conditions as well as employee retention and customer satisfaction.

This is the kind of decision (a four-day week) that could help get and keep the best employees. Employees like flexibility. Retail is often a seven-day-a-week business, so a new scheduling process will be needed, but that’s really just a detail to work out.

My money is on folks loving a four-day work week. The answer to the second question is how you shape the offer. If it is a one time (reviewable) option it should present no challenge to labor scheduling, If it is a matter of opting in and out at will, it will create chaos.

This should be a no brainer, not only for Lowe’s, but for most retailers. The devil will be in the scheduling details.

Finding a balance between the needs of a retail store and the schedule of front-line workers is hard. Traditional models with rare or no weekends off are the norm, coupled with non-concurrent days off, which will continue to drive talent to other industries. Hats off to Lowe’s, the four-day work week will resonate with their current and future employees.

Stores looking for part-time help will need to get creative and utilize staffing resources to fill in gaps, this system may help move the cycle of employment quicker, but a holistic strategy will still need to be in place.

It sounds like a move that will be popular with current sales associates and future hires. What is not stated, however, is how Lowe’s will balance staff shifts to fully cover weekends. Also, a four day week implies fewer hours and there may be a threshold for maintaining full benefits. Many retailers have been criticized for scheduling employees for just under a full compensation level.

I started working at Lowe’s about 3 weeks ago and having a set schedule is just important as a living wage. (I have 15+ years of painting experience (self-employed), years of customer service in other retail settings, and apartment maintenance experience, and still start at $15hr.)

There is no reason FT employee hours should fluctuate each week. Yes, I chose to work there because I like the home improvement industry. But if they want to keep experienced people like me, or attract other trade professionals, Lowe’s needs to smarten up.

I’m already planning my exit. At 45, my time and knowledge are worth way more than $15hr. And a structured schedule would be easier to fill. They want FT people to have “open availability”… that’s not realistic.

When I was a Department Supervisor at Home Depot I had emailed Governor Swartzeneger about this system. If I only had 2 more hours in my day, I could finish projects, reports, and leave delegation communication for my team, and then I would get an extra day off to be with the family. In society an extra day of rest would allow eventually for an extea day of shopping and I believe we would see some stimulation in the economy. Glad Lowe’s figured it out! Question is now, what about the 5th hour rule?

This is a great move, and not just for retail. People are struggling across the board with not having enough time. So it’s a great way to attract talent.

On the flip side, many companies are looking for ways to cut costs in the downturn, and offering a four day week at reduced pay can be a way to retain staff during rocky times rather than laying them off.

Braintrust
"This move is long overdue and I hope the rest of retail takes notice."