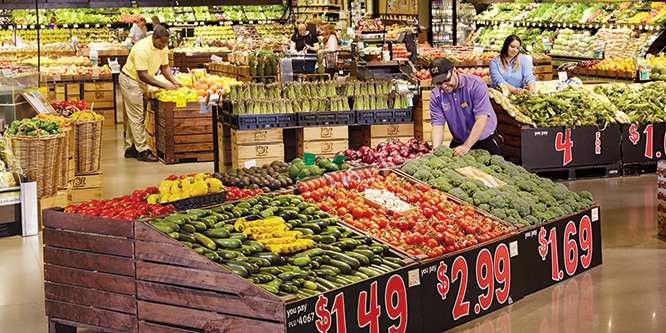 Before the new Wegmans in Midlothian, VA ever opened its doors, 24,000 people had signed up for its rewards card. According to reports, the store’s lot was completely full before it officially opened for business this past Sunday. When all was said and done, the grand opening was the third largest in the family-owned chain’s history.

Ex-pats from Wegmans’ home base of Rochester, NY were able to pick up delicacies, such as Zweigle’s red and white pop open hot dogs that they left behind when they moved to Virginia’s capital region. Customers were also able to find plenty of options from local farmers and food suppliers, a key feature of all Wegmans.

When all was said and done, Wegmans concluded that the day was a success, although in typical form, management refused to provide details on just how successful.

“We are elated with the Midlothian opening. It was a smooth opening by every measure we look at, and the store is very busy today,” Jo Natale, vice president of media relations at the chain, wrote in an email to the Richmond Times-Dispatch on Monday.

In other news, Wegmans was ranked seventh in the 2016 Temkin Experience Ratings survey. The survey asks 10,000 consumers across the U.S. to rank their experience with various retailers. Wegmans was the only supermarket chain to see its score improve from 2015.

DISCUSSION QUESTIONS: What is it about Wegmans that draws such large crowds whenever the chain opens a store in a new market? How is the chain able to sustain the enthusiasm of its customers well after its grand openings?

Please practice The RetailWire Golden Rule when submitting your comments.
Braintrust
"Wegmans is the one supermarket chain that seems to care more about their customers then any other."

"Their mission seems to be to excel at everything they do whether it’s having an in-store florist or an outstanding bakery department."

"The special sauce that makes Wegmans unique is all those attributes that focus on the consumer, not the products."

There are three things that I believe draw large crowds for Wegmans: 1. Buzz — for those that have experienced Wegmans, they are more than happy to talk about it (very positively!); 2. Experience — simply put, it’s unique and multi-sensory and; 3. Community-centricity — the grocer understands the importance of local sourcing, community involvement and social consciousness.

The whole is greater than the sum of the parts … and Wegmans has a lot of parts that create a unique customer experience.

This article touches on a couple of Wegmans’ key differentiators, like unique products and fresh local produce. But those are still just food that could be stocked by other grocery stores.

The special sauce that makes Wegmans unique is all those attributes that focus on the consumer, not the products. The quality of the staff and how they interact with consumers is at the top of the list. And it’s hard to describe, but Wegmans merchandises their stores so that consumers can literally experience the sights, sounds and smells of great food and healthy living.

In so many ways, Wegmans has captured the ability to create a “store” like Starbucks … a place consumers thoroughly enjoy as an experience. The qualities of creating a Wegmans experience extend well beyond the place called the store. The holistic customer experience becomes the unique differentiator that is very hard for other retailers to replicate.

Chris — I just don’t get it. We shop Wegmans every couple of weeks to pick up a couple of things we can’t get anywhere else, but where’s the great food and healthy living? They have a big prepared food area (prepared does not equal healthy), but many supermarkets offer a downsized version. They offer 3,000 organic items (they say) and that is all we buy there, but Whole Foods offers far more “healthy” options. In fact, Wegmans primarily sells every major brand of food that’s laced with pesticides, GMOs, HFCS and other toxic ingredients. The staff? Clearly no better than Whole Foods or Trader Joe’s and other smaller grocers and once I encountered a truly nasty cashier there. After the first two aisles, it transitions into a typical grocery store and farther out transitions into more of a wholesale club environment. For a while they would not accept returns of perishable items, so if the blueberries a customer bought turned out to be moldy, it was an argument for them to accept them back.… Read more »
3
|
-6
-   Share

Shopping for groceries can be tedious or fantastic. The IDEA of an exciting experience is enough to mobilize thousands of people to crowd parking lots and linger in the aisles. Wegmans: we in Washington DC are waiting.

Wegmans is the one supermarket chain that seems to care more about their customers then any other. They have for years been the innovators of the industry and continue to this day. It continues to amaze me that they can expand so far away from their home base and still provide the very best. How far can they go? Only they know for sure. I think they will continue to push the envelope and therefore continue to have the success they have had so far going into the future.

Wegmans has always put the customer experience first before the bottom-line numbers. That’s something most of their competitors, being publicly held, cannot do. They will also transfer in well-trained employees rather than train new ones for key positions. They grow slowly and methodically. It really does take a long time for Wegmans to get a new store open, thereby increasing the anticipation. Walmart used to open them right and left all the time totally eliminating anticipation.

Wegmans does a great job of making the shopping experience fun, and they have a beautiful layout which is quite visually stunning. They locate their stores in high-income areas and are very good at promoting local as well. They simply know how to create a buzz and overall do a great job making sure the customers get great service, which is what we all strive for. Congrats!

By tailoring everything to the shopper’s experience, Wegmans has reinvigorated the way people shop for food. Their staff is friendly and knowledgeable, they sell locally grown vegetables and their generic store brands are cheaper and better than most of the other options. Their mission seems to be to excel at everything they do whether it’s having an in-store florist or an outstanding bakery department. As long as they stick to what they’re doing, keep introducing new products that you can’t find elsewhere and continue to find new ways to engage customers, they’ll continue to thrive. I don’t see the excitement dying down anytime soon.

There are many reasons why Wegmans, along with Publix, is considered America’s best supermarket. Wegmans wins on a variety of measures: legendary customer service, freshness (not simply in produce — meats and seafood are second to none), artisan products (cheese, bread, etc.), theater-like presentations of merchandise, associate store and product knowledge, good value on top 100 SKUs and community-focus. Wegmans has developed a differential advantage that many have tried to emulate. However, Wegmans is not concern about the “concept du jour,” Instead it stays focused to its mission, hires and develops the best staff and makes all decisions customer-centric.

Wegmans is one of the few things I miss from my years in PA. They consistently execute flawlessly, putting consumers first!

Wegmans has built a reputation and following that any other grocer would like to have. Now with Publix also moving in the area, the locals will have two of the best to select from. I recall several years ago having my first experience with Wegmans just outside of Baltimore in the Timonium area. It was a different and enjoyable experience. We ended up eating our dinner there and cancelling the reservation we had at a nearby restaurant.

Wegmans has a great customer experience, and its successful model and consumer focus follow it around wherever they open a store. Great local products and Wegmans’ uniquely sourced products only add to their panache among their loyal following. This is a perfect mix for their customers, and Wegmans continues to use this to expand their stores in a successful model that grows no matter where the store is located.

Braintrust
"Wegmans is the one supermarket chain that seems to care more about their customers then any other."

"Their mission seems to be to excel at everything they do whether it’s having an in-store florist or an outstanding bakery department."

"The special sauce that makes Wegmans unique is all those attributes that focus on the consumer, not the products."