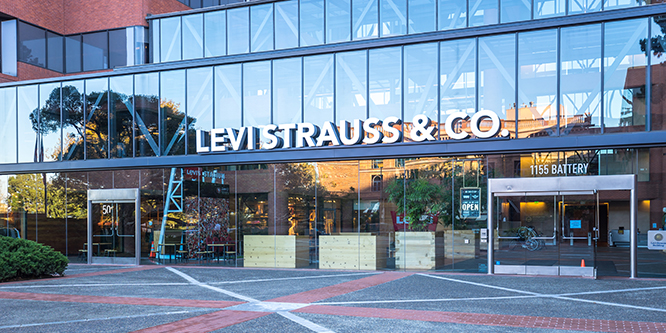 When Chip Bergh joined Levi Strauss & Co. as its CEO in 2011, the jeans maker was far removed from its glory days as a new generation of consumers saw the brand as old and dusty rather than iconic. Coming off its third consecutive quarter of double-digit revenue growth, the privately-held company is in a much different position today. Levi’s turnaround has earned Mr. Bergh the respect of his peers including his selection as the next recipient of the “Visionary Award” from the National Retail Federation (NRF).

Mr. Bergh, according to NRF, was chosen for the honor because of “the momentous turnaround” that has taken place under his leadership. He is credited with “strategically seizing opportunities for growth, pushing the envelope on sustainability and championing innovation.” Mr. Bergh will be honored at the NRF Foundation Gala in New York in January.

As he told Quartz earlier this year, Mr. Bergh joined a company that had seen its annual sales decline $3 billion between 1996 and 2001 followed by a decade that was not kind to the brand as consumers chose upmarket labels such as Seven for Mankind rather than wearing Levi’s.

When he arrived at Levi Strauss, Mr. Bergh focused on identifying what parts of the business worked and which ones did not. He discovered that Levi’s and Dockers pants for men were the core of the company’s sales and efforts were made to shore up each.

He then went about identifying other parts of the business that were underdeveloped such as tops and women’s clothing. In 2015, Levi Strauss relaunched its women’s line including the use of more stretch fabric to help it compete with the growth of athleisure fashion.

The company, which is already known for its leadership role when it comes to sustainability issues, received attention earlier this month when it announced the creation of a $1 million fund to promote organizations dedicated to ending gun violence in America.

In an article on the Fortune site earlier this month, Mr. Bergh wrote that Levi Strauss has a history of taking stands including integrating factories in the American South before the passage of Civil Rights legislation. It also offered benefits to same-sex partners in the nineties, well before most other corporations.

While each one of these stands may have been controversial at the time, history proved the company right in the long run,” wrote Mr. Bergh. “And I’m convinced that while some will disagree with our stand to end gun violence, history will prove this position right too.”

DISCUSSION QUESTIONS: What qualities are common among retail visionaries in your mind? Who among the recent crop of retail leaders would you put in the category of a visionary?

Please practice The RetailWire Golden Rule when submitting your comments.
Braintrust
"Many CEOs can learn a lot from Chip Bergh with his commitment to company success, pride in what he as a leader does and not being afraid to take chances."

"What a novel idea, “Mr. Bergh focused on identifying what parts of the business worked and which ones did not. ”"

"This is every part vision as it is grit, and the ability to rally others around that vision or cause."

The most important attribute of a true retail visionary is being someone who sees the business in multiple dimensions, can identify and articulate a vision for the business and then fearlessly executes it successfully. And like in the case of Mr. Bergh, a visionary also isn’t afraid to take a stand on societal issues. While there are many great retail visionaries, the one at the top of my list is Jeff Bezos.

Taking nothing away from him, is he a retail visionary or a really good businessman who can read P&L statements and pays attention to what his customers want? George’s description sounds less visionary and more just really good at making and selling clothes – a great feat in and of itself.

What a novel idea, “Mr. Bergh focused on identifying what parts of the business worked and which ones did not. ”

I believe that is what is truly lacking in retail leadership. There is a huge reluctance to discover that there are parts of their business that no longer work. Even when they try something new that may not work, they seem to revert to the old. We have seen this in retail for a century and we continue to see it today.

Chip Bergh clearly needs to be recognized, and I congratulate him receiving the “Visionary Award” from NRF. Finding other leaders in that category is tough. Of course, one can quickly name Steve Jobs followed by Tim Cook, and if given enough thought others will come to mind but only a handful. Why Chip Bergh has succeeded with Levi Strauss is more critical because he from day one had the right attitude for the company to succeed. Too many CEOs today are short-term thinkers just interested in fulfilling their contract term with modest growth without rocking the boat or taking risks in fear that if they don’t achieve success it will reflect on them and not only impact their current job but future jobs. So they play it safe. As a result, we see many companies that could be doing much better than they are but as long as they are doing well enough, that’s acceptable. I think many CEOs can learn a lot from Chip Bergh with his commitment to company success, pride in what… Read more »
3
|
0
-   Share

Like the overused Wayne Gretzky quote, “I skate to where the puck is going, not where it’s been.” Although it has been watered down over the years (and Steve Jobs capitalized on it), it is a fundamental question of whether as a leader you position yourself on offense or defense- proaction opposed to reaction. This is every part vision as it is grit, and the ability to rally others around that vision or cause.

I have to give Chip Bergh huge credit for what he has accomplished. Turning around a legacy brand in this day and age is DIFFICULT. Talk about headwinds. Talk about competition. Talk about appealing to a whole new generation of customers. He just kept at it — and it worked. I often use “aesthetic and attitude” as measures of a brands profile. It’s not that he changed the aesthetic as much as he changed the attitude. And he changed it in both product and politics. Product — yes we CAN and WILL compete with athleisure. This brand is an “original” and that still means something. Politics — or maybe just saying something about the world we live in now. He had to know that not everybody would agree with his stance. And that was not only OK, it immediately became woven into the brand promise. I tend to focus on product when evaluating a brand, but more and more non-product issues highly influence the sum of the parts. The emotional connection customers have with a… Read more »
0
|
0
-   Share

Braintrust
"Many CEOs can learn a lot from Chip Bergh with his commitment to company success, pride in what he as a leader does and not being afraid to take chances."

"What a novel idea, “Mr. Bergh focused on identifying what parts of the business worked and which ones did not. ”"

"This is every part vision as it is grit, and the ability to rally others around that vision or cause."