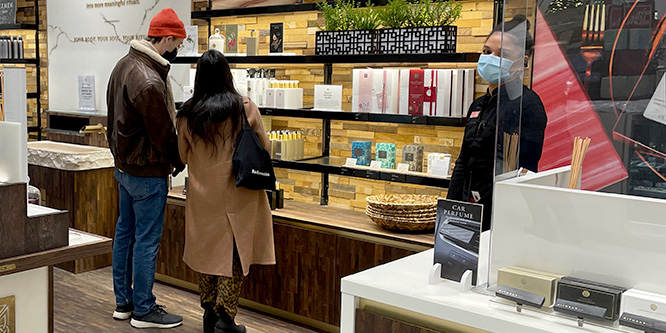 Neither the Omicron variant, bad weather nor inflation proved to be enough to slow consumer spending in January as retail sales increased 3.8 percent from the month prior, according to U.S. Census Bureau figures. Year-over-year sales were up 13 percent.

The gain in January followed a revised 2.5 percent drop in December after November’s record performance as Americans began their Christmas shopping early in 2021. December’s year-over-year sales, considered a better indicator, were up 16.7 percent.

“January sales overcame major headwinds that make the results all the more impressive,”  Jack Kleinhenz, chief economist at the National Retail Federation, said in a statement. “A triad of forces weighed on consumer behavior and spending as weather slammed a large portion of the United States, the omicron variant was relentless and inflation was escalating. On top of that, the enhanced child care tax credit ceased at the end of 2021, impacting millions of families. Despite all that, consumers ramped up spending even after a record-breaking holiday season.”

“While the year ahead has challenges with inflationary pressures, labor shortages, COVID-19 impacts and uncertainty related to international tensions in Russia and China, today’s numbers show that despite these concerns, consumers are spending, and the economy remains in good shape,” said Matthew Shay, NRF president and CEO. “We are confident that retail sales growth and overall consumer financial health can continue, and current pressures in the economy should be moderated if election-year political pressures don’t result in policy decisions that compound the challenges our economy is already facing.”

DISCUSSION QUESTIONS: How much of a factor did inflation play in retail’s sales numbers for January? What factors do you think are most likely to challenge the industry’s sales growth in 2022?

Please practice The RetailWire Golden Rule when submitting your comments.
Braintrust
"Inflation per se is not a death sentence to retail business if customers are willing to pay higher prices."

"I think we have to watch inflation and debt carefully."

"I love focused metrics when they actually mean something, but month over month numbers aren’t going to fall into that category any time soon."

Month-over-month is a meaningless number compared to year-over-year, and comparisons to two years ago are probably more reflective of the health of the business. But inflation per se is not a death sentence to retail business if customers are willing to pay higher prices. I’ve mentioned before that the high inflation rates of the late ’70s and early ’80s coincided with rapid retail growth; we may be seeing the same phenomenon again today.

Inflation was a key factor in the retail sales numbers, but these positive results were a result of much more than inflationary pressure. Consumers are resilient and this is clear from the results. There are so many factors impacting consumer spending – both positive and negative – that it’s difficult to predict how growth through 2022 will go. What does seem to be clear is that, despite it all, consumers are resilient and other than another spike in COVID-19, I don’t see why it shouldn’t continue through 2022.

It will be interesting to see how January’s numbers look when corrected for inflation. If inflation was up 7.5 percent over the last 12 months and sales were up 13 percent year over year, it looks like consumer behavior is outperforming the triad of negative forces. Despite the ongoing pandemic, the potential for military conflict, and the inflationary forces (whatever you attribute them to), it appears that shoppers are in a buying mood!

The articles I read about how much sales increased in the month of January neglected to use the key phrase “when adjusted for inflation.” Thus, if sales were up 7.5 percent over last January, and inflation was up 7.5 percent in January compared to last year, the net gain was zero. Are we trying to paint an unrealistically rosy picture?

People keep saying “retail sales grew in spite of inflation.” Actually, inflation contributes to the sales gains. If things cost more, people pay more and it pushes up retailers’ sales. That said, January was very solid as sales increased by much more than inflation and, consequently, volumes rose. Admittedly, the prior year comparative wasn’t too punishing, nor is the February comparative, so there is probably a bit more wind in the sales yet. However once we get to March and households are more squeezed and prior year numbers are very challenging I expect growth will really moderate or even go slightly into reverse.

It seems like a fair statement to say that the economy is in pretty good shape overall. But what’s going on with credit card debt and default rates? Default rates in the newly popular BNPL programs? Transaction and unit growth versus dollar growth — by category? Plus, why would we even look at month over month numbers after experiencing the most abnormal December of our lifetime? I love focused metrics when they actually mean something, but month over month numbers aren’t going to fall into that category any time soon.

The silliness of monthly data reports is astounding. The idea that people actually react to it is foolish. Move Easter from the mid-March to April and all of the sudden the monthly data from March looks bad while April is a banner month.

The only way to make sense out of this report is to measure from the beginning of the buying season through the end of January.

I have a similar gripe when any economic numbers are reported. Jobs, inflation, economic growth, et. al. But if we made all those reports on a rolling 12 months it would be a better analysis, which of course leads to better decisions.

If we take a longer view, retail has shown consistent steady growth every year since 2005, with the exception of the 2008 recession and 2020’s Covid lockdowns. January 2022 numbers show us falling back into our regular post-COVID-19 trend line. Factoring in inflation, there is still a slight gain which places us right back where we left off in 2019 on the growth curve. Despite inflation, consumer wages and disposable income are trending up, something that hasn’t happened for a long time (which could account for continued spending despite inflation). The bigger issue for me is escalating corporate debt, which has climbed to an all time high and significantly increases risks to brands and retailers as inflation manifests and our economy continues to suffer challenges.

Consumers are extremely weary of COVID-19 and these numbers are somewhat reflective of shoppers’ resiliency to domestic dynamics within the U.S. That said, inflation is real and the continued increase in prices across nearly all sectors is going to dampen everyone’s buying mood. Additionally, when you couple this with tricky foreign affairs in AP and Eastern Europe, I expect a softening of sales gains throughout 2022.

Inflation is certainly a factor, but so are holiday gift cards which are often redeemed in January.

Agreed, which is why the YOY figures are the better benchmark. To your point, I am curious what gift card sales data would show. I expect with inventory shortages this past holiday season that a lot more gift cards were unwrapped and could have contributed to higher sales.

I do not put muich stock in the numbers for month to month. There are a lot of mitigating circumstances that are in that number that you need to disregard. Year over year is a more accurate measure.

Inflation definitely had an impact, but perhaps not to the degree we expect. You have to consider wage increases alongside the inflation, as well as the lower unemployment rates. Sales growth for 2022’s first challenge is going to be tax season. I expect significant drops in comp spend from tax returns. Also consumer sentiment remains low despite the higher spend figures.

If the numbers aren’t adjusted for inflation — really? — then, obviously, they need to be heavily discounted (literally). But regardless, the people who told us last month not to overinterpret month-on-month data, I hope will be repeating the mantra this month; I will be.

I think we have to watch inflation and debt carefully. Retail sales numbers grow with inflation, as people will buy items to hedge against inflation and also optimism as we exit COVID restrictions (and carry debt…). The challenge is that any unemployment increase coupled with inflation could turn the economy sideways quickly — we have seen it happen before.

Generally, when prices go up, retail sales go up, even if unit sales go down. Inflation always throws a curve ball in reliable sales reporting.

Braintrust
"Inflation per se is not a death sentence to retail business if customers are willing to pay higher prices."

"I think we have to watch inflation and debt carefully."

"I love focused metrics when they actually mean something, but month over month numbers aren’t going to fall into that category any time soon."