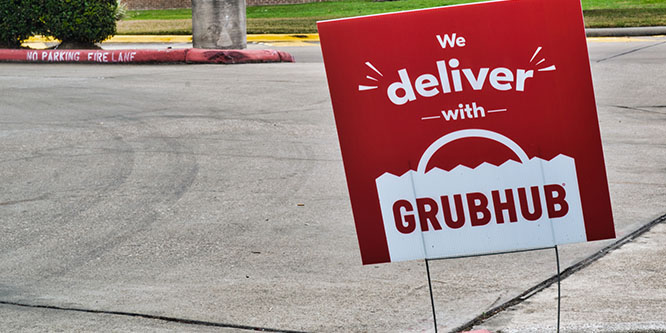 Grubhub is exploring its strategic options, including a possible sale, and it appears as though there are plenty of food retailers interested in kicking the tires of the online meal ordering and delivery service, to see if it might be the right vehicle to help them drive sales going forward.

The New York Post reports that Brittain Ladd, a former executive with Amazon.com, said that Ahold-Delhaize, Albertsons, Kroger and Walmart are four retailers currently exploring how a Grubhub acquisition might affect their grocery delivery operations.

Mr. Ladd told the paper that he had contact with executives at all four companies and that they were interested in exploring a potential purchase.

“Acquiring GrubHub checks a couple of boxes for Walmart,” DA Davidson analyst Tom Forte told the Post. “I’ve long thought that Grubhub could apply its expertise beyond restaurants to grocery.”

The space where Grubhub operates has become increasingly competitive in recent years with DoorDash, Postmates, Uber Eats and others all looking for a share of the restaurant delivery market.

The Wall Street Journal reported in October that Grubhub’s reluctance to offer discounts similar to its rivals has resulted in the service growing more slowly, albeit more profitably than its competitors.

Grubhub CEO Matt Maloney has continued to maintain that unprofitable rivals will eventually flame out, but some of those same competitors are reaping the benefits of billions of dollars in venture capital to run promotions targeted to gain share. How much market share Grubhub can afford to lose, even if it is profitable, remains the question to be answered.

The company’s share price, which has risen on the news of a potential sale, is still trading at 63 percent below its highest level in 2018.

DISCUSSION QUESTIONS: Should Ahold-Delhaize, Albertsons, Kroger, Walmart or some other grocer buy Grubhub? What do you see as the benefits and risks associated with a major grocery chain operator acquiring the service?

Please practice The RetailWire Golden Rule when submitting your comments.
Braintrust
"Seems to me that, given history, Walmart will just create their own Grubhub-like service and dominate with it."

"This could represent an interesting proposition in the fight for the family dinner – in a similar manner to the way that Kroger bought Home Chef."

"I think if they purchased them, they would learn from them and eventually jettison them in favor of their own services. Sound familiar?"

11 Comments on "Should Ahold-Delhaize, Albertsons, Kroger or Walmart buy Grubhub?"

This could represent an interesting proposition in the fight for the family dinner – in a similar manner to the way that Kroger bought Home Chef. The question for me would be, would they lean towards providing the acquiring grocer’s products or remain agnostic? It could be an interesting way to provide meal kits day by day rather than for 3+ days.

Seems to me that, given history, Walmart will just create their own Grubhub-like service and dominate with it.

At this point, it seems that most retailers are outsourcing delivery (bridge strategy). As open as retailers have been to outside partnerships, the preference is not to share services with competitors when it can be avoided. So it’s only natural that some would shift to acquisition (buy) and Grubhub is a logical target. Any retailer that grabs Grubhub could easily rebrand it, mitigating the perception of any disconnect.

I don’t know. I’d have to ask the question, “can they cook?”

Interesting question! An acquisition is probably the only sensible way for any of these grocers to get into meal delivery for the following reasons: 1.) Given that this is a three-sided business (consumer/delivery person/restaurant) it would be extremely difficult for anyone to enter this relatively mature market now with a brand new offering without losing tons of money. 2.) Meal delivery is certainly cannibalizing grocery sales, especially among younger shoppers. 3.) And there is the possibility that a meal delivery force could be used to deliver groceries.

It wouldn’t be without risks, though, with a price point at, or above, Grubhub’s current $5 billion market cap because 1.) This space is becoming more competitive across all three dimensions (consumer/delivery people/restaurants) and 2.) California’s AB5 brings significant risks that delivery people ultimately have to become employees.

If I were in strategic planning at any of these companies I’d look closely, but would probably ultimately decide against it.

Maybe one of them should or will. But here’s the more important question:
Why didn’t one of the big thinkers at these chains come up with a Grubhub of their own, rather than be reactionary?

It simply may be too late for Grubhub, as their competitive edge has been eroded by the emergence of DoorDash, Postmates, and Uber Eats. Grubhub’s model was built on depending on the restaurant’s delivery capabilities and earning a percentage of the revenue. Their main competition has mitigated this by depending on their own transportation fleet, which is far more scalable than Grubhub’s model.

The remaining value in Grubhub at this point is their capabilities, talent, and technology that may get absorbed into a larger company.

Acquiring the network and know-how to delivery orders makes a lot of sense for grocers who need to put products in the hands of customers.

Mr. Forte’s opinion and the instant poll notwithstanding, I don’t see why grocers are the logical suitors … at least more than anyone else. Indeed, why not UPS or some trucking company (i.e. businesses whose specialty is delivery rather than retailing)?

The benefit to a grocer — presumably — is that as people shift from buying food (and making their own meals) to buying meals pre-made; this will offer offsetting revenue, hence negative correlation and risk is reduced. But this thinking seems like something of a stretch for me. The business at present seems marginal.

I don’t think so. Customer door delivery requires either picking or preparing stuff and sending it on that “last mile” to deliver it. Grubhub as a last mile resource doesn’t seem all that exciting. Mind you the concept of “dark kitchens” is interesting, but that’s a path to opening a QSR as much as a last mile delivery. Don’t see that opening a direct to home QSR is a great fit either.

Braintrust
"Seems to me that, given history, Walmart will just create their own Grubhub-like service and dominate with it."

"This could represent an interesting proposition in the fight for the family dinner – in a similar manner to the way that Kroger bought Home Chef."

"I think if they purchased them, they would learn from them and eventually jettison them in favor of their own services. Sound familiar?"