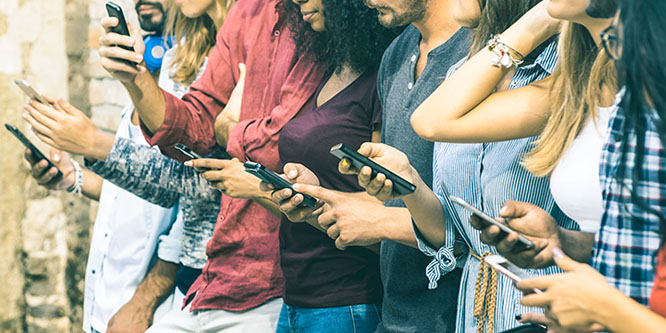 More than 43 percent of Millennials said that they would consider purchasing from another retailer if the one they are engaging with does not have a social media page on which to provide feedback, according to a study conducted by Harris Insights, which appeared on ZDNet. That is in comparison to 21 percent of adults aged over 45.

Sixty-six percent of Millennials said that the speed with which a company responded on social media would impact their brand loyalty and 72 percent said they would be more loyal to a brand that responds to social media feedback.

A generational expectation for quick, responsive customer service on social media makes sense in light of other big recent retail trends. Most notably, Amazon.com’s mantra of “customer obsession” has played a large role in reshaping what customers expect from their interactions with retailers in terms of responsiveness to complaints.

But where exactly consumers are looking could certainly change. While Millennials are still often found on Facebook and Twitter, younger generations are not so interested in their older siblings’ and parents’ social platforms.

At the moment, Gen Zers are opting to use more visual forms of social media like Instagram and Snapchat, according to a study by Criteo.

Other recent studies have also discussed a shift away from Facebook and Twitter in the context of an overall bad reputation that the social platforms have developed.

Issues like the failure of social media platforms to take privacy seriously enough and the possibility of social media use as a source of depression have made even regular users more wary of the technology. But while many may swear that they’re swearing off social media for such reasons, it’s not clear how this actually impacts overall usage across platforms.

DISCUSSION QUESTIONS: Do you believe that social media for customer service is an important loyalty driver in retailing today? Will this trend continue to grow in importance with younger generations or will customer service expectations change once again?

Please practice The RetailWire Golden Rule when submitting your comments.
Braintrust
"I think this is a subset of 'responsiveness builds loyalty' or the inverse, ignoring people makes them not like you. "

"...part of the reason social media has become such a relied source for customers is that usually, it garners the quickest response."

"Social media may be particularly important to Millennials and Gen Z … but Gen X and Boomers use it too. So it is important to consumers – period."

Social media is now a very important channel for customer service. Many consumers, not just Millennials, use it to complain, to ask questions, and to engage with brands. All retailers need to put as much effort into it – or perhaps more since the expectation for instantaneous responses is higher – as they do into their other customer channels.

Skills are also needed on how to react and respond to difficult issues, especially if the interaction is carried out in full public view.

It is true that many shoppers of all ages use social media to research a company and voice their comments about their experience. However, it’s a matter of what comes first the chicken or the egg? Rather than worrying about your social media platforms and ability to address customers’ concerns, doesn’t it make more sense to focus first on making sure you’re providing the best customer service? There will always be the unhappy customer no matter what you do, but those numbers should be minimal when you are providing a great customer experience. Offering social media avenues for communication between your business and your customers is fine, but if you’re not providing a great customer experience all you will find are tons of negative comments you’ll be sorry to receive. Priority number one: make sure you are doing everything possible to make the shopping experience the best it can be. Then worry about your social media.

Social media is like a cocktail conversation. That means if the retailer response takes too long, that pregnant pause can be a killer. A timely response tells the customer they are important. Technology is not going away. Born digital in diapers, they don’t know a world without technology. Customer service expectations will rise as the retail battles intensify on all levels.

I believe social media presence in general is a key driver of loyalty in retail today. It’s not just about customer service – though that is the most important part – it’s about responding to consumers who have chosen to engage with you there. If you have a presence, then you better be fully present. But I also agree that retailers are going to have a challenge with the upcoming Generation Z. Neither of my kids (14 and 17) are on Twitter or Facebook, nor have any desire to be. Slack, yes. Instagram (“Insta”), yes. And surprisingly, Pinterest. But these aren’t really designed to be customer service channels. Instagram and Pinterest are good for engagement at the front end of the customer journey, but not so good at the back end. Right now, it’s not mostly their own money that Gen Z is spending, and thus they aren’t so ready to vent or seek customer service redress. Maybe when THAT part changes, they’ll join Twitter or Facebook just to be able to vent. I wouldn’t… Read more »
1
|
0
-   Share

I think this is a subset of “responsiveness builds loyalty” or the inverse, ignoring people makes them not like you. Retailers shouldn’t worry about responsiveness to Millennials or on social media specifically, they need to be responding to customers wherever and however the customer reaches out.

I agree with Neil. Social media may be particularly important to Millennials and Gen Z … but Gen X and Boomers use it too. So it is important to consumers – period.

M-commerce continues to grow in importance, and so will social media as both a research method and a loyalty tool. As the Millennials and Gen Z become retail spenders, there is no doubt this will become a new frontier of retail’s hypercompetitiveness!

I have conducted three research projects on Millennials and their marketing and media habits relative to their food retail and foodservice behaviors. My research underscores the role of social media in developing a strong customer relationship. Among my findings relative to the information in this article:

Apparently I am a Millennial because I too prefer to interact with companies and brands via social media — the faster they respond the more likely I am to buy from them.

Facebook is still the big place consumers like to interact with brands and it isn’t going away anytime soon; Facebook ads are too lucrative. But when it comes to customer service, Twitter is the go-to place when you need immediate response. And because whatever you say is public and searchable, smart companies respond quickly. I can’t remember the last time I called or emailed an airline with an issue – a tweet gets more attention.

This is the world we live in. If companies and brands choose not to participate it’s their loss – social media is where consumers of all ages want to be.

Social media is where consumers brainstorm, research products, and identify communities around brands. Brands that are active and consistent online can be part of the vital inception phase that leads to a customer’s decision to make a purchase.

Since social media is also where Millennial consumers go to voice customer service issues, it’s a channel that brands need to monitor regularly to respond in the short time windows that customers demand. Small caveat: responding “DM us to discuss this further” doesn’t buy brand more than a few hours of time when it comes to addressing consumers’ complaints. Companies need to assign someone to the task of social media dispute resolution.

Good customer service breeds loyalty, whether that’s social media or traditional models. However, part of the reason social media has become such a relied source for customers is that usually, it garners the quickest response. An email or phone call might be responded to in 48 hours, but once you’ve gone public with your query or complaint, suddenly a brand is clamouring to get back to you. This has become learned behaviour, so will only continue.

The short answer to this question is YES (IN BIG CAPS!)! Social customer care is growing in popularity. Customers are reaching out on social channels to get their answers resolved. And, the companies that take too much time (as in hours), risk losing the customer. A stat came out last year that the average response time on Twitter from a brand is (an abysmal) seven hours. If I wanted my question answered in seven hours, I would have waited seven hours to ask the question! A younger or older generation … it doesn’t matter. Brands need to respond in an appropriate manner to all customer support requests. And, the trend should continue, as it has over the past few years. More and more customers reach out to brands on alternative channels.

Social media is clearly an important loyalty driver today and not just for Millennials, but there is a broader context of how consumer/shoppers will choose to engage with the retailer. Given the broad set of preferences across the consumer base, this is not something that can be dictated. Retailers need to think of social media as one of many channels and methods consumers use to interact with their brand. That experience needs to be optimized for responsiveness, convenience, simplicity, ease of use to create a memorable positive impression. This is what drives customer loyalty. Customer service is one aspect of the overall experience and how that is delivered over the social channel leveraging various social media platforms is critical and cannot be ignored. What users of all ages who leverage this tend to expect and appreciate is the timely response. Often it is the quickest if not the most effective way to resolve an issue. It can also be a way to engage the brand on a number of topics that are not necessarily just… Read more »
0
|
0
-   Share

Braintrust
"I think this is a subset of 'responsiveness builds loyalty' or the inverse, ignoring people makes them not like you. "

"...part of the reason social media has become such a relied source for customers is that usually, it garners the quickest response."

"Social media may be particularly important to Millennials and Gen Z … but Gen X and Boomers use it too. So it is important to consumers – period."