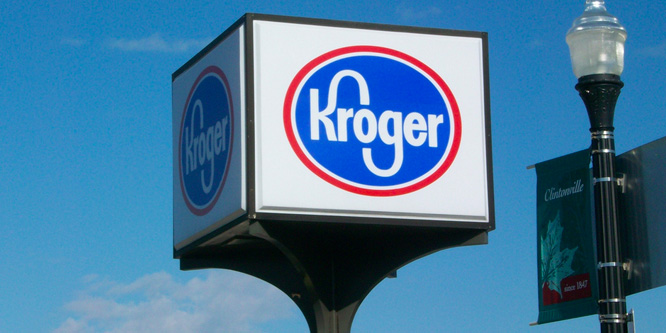 K7 Design Group, a family-owned manufacturer and distributor of consumer products marketing under the “Ultra Defense” brand label, has filed an $85 million lawsuit against Kroger alleging that the grocer placed a huge order for hand sanitizer in the early months of the pandemic when supplies were running short nationwide and then refused to take shipment when demand softened.

The complaint against Kroger, which was filed last week in a federal court in Cincinnati,OH, alleges that the supermarket giant’s refusal to take delivery has left the supplier “with a tremendous quantity of hand sanitizer for which K7 has no other use and which it has been forced to store in its overflowing warehouses.” The suit claims that, not only did Kroger refuse delivery of legally contracted product, but that it “tried to use its immense market power to force K7 to absorb losses that” are the grocer’s responsibility.

K7, which lists Albertsons, Kohl’s, Meijer, Sam’s Club and Walmart among the retailers that sell its products, maintains that it filled a roughly $5 million order for its hand sanitizer for Kroger early in the pandemic. The product “flew off Kroger’s shelves” and, according to the vendor, the retailer followed with a second order of over $100 million. After an initial delivery of products that were part of the order, Kroger later refused any further deliveries, citing a lack of warehouse space as the reason. The remaining hand sanitizer that was part of that order with a value of $85 million has been sitting in K7’s warehouses ever since.

A Kroger spokesperson, responding to a RetailWire email inquiry, said, “We are disappointed by this vendor’s claims and intend to vigorously defend against their accusations.”

DISCUSSION QUESTIONS: Is it a common practice for retailers to refuse delivery of contracted products due to a lack of warehouse space or other circumstances? Are accommodations, short of legal action, typically made in these cases and do you expect to see a resolution in the current impasse between K7 Design Group and Kroger?

Please practice The RetailWire Golden Rule when submitting your comments.
Braintrust
"This is why the world is full of lawyers. Scrapes between suppliers and retailers are as old as retailing."

If you order something and sign a contract for it then, so long as the requirements of the order are met, you pay up. The only exception would be a clause in the contract that allows for delivery refusal or termination of the order. Big retailers can, and sometimes do, use their power to get out of agreements. However when that negatively impacts someone else’s business I think it is an unreasonable practice that should be remedied via legal means.

This is why the world is full of lawyers. Scrapes between suppliers and retailers are as old as retailing. While this case may seem unusual given the circumstances, this appears to be the type of dispute that their existing vendor agreement should have accounted for. While it may be that Kroger is applying undue pressure on a small supplier, it may also be Kroger exercising their rights that were contained in their contract with the supplier. It may seem unfair and harsh, but it might just be business.

It is arbitrary and capricious to cancel orders for anything other than a catastrophe. A contract should be honored no matter how heavy the gorilla in the room is. Alternative approaches to unforeseen situations can always be worked out in the spirit of collaboration and partnership. What are we if we do not honor contracts?

Kroger could have an inventory problem as a result of an overly aggressive buyer. Neil is right. If the requirements of the purchase order are met, it is an obligation, except if the purchaser reserves the right to cancel. The big purchase order clause would be if the vendor missed a “cancel if not shipped by” clause in the purchase order or a product quality standard was violated. Other than that, I know where you can get some sanitizer.

We don’t know the details of the agreement between Kroger and K7 Design so there is no way to determine who is in the wrong. But the optics of this act – a large company using its market power against a smaller supplier – aren’t good for Kroger.The loss of brand goodwill could be far more expensive than the $85 million order.

An order is a contract between two parties. Failure of one party to fulfill their obligations is a breach of that contract. As with any contract, the devil is in the details.

Nothing in the article indicates if Kroger had the right to refuse the delivery if it lacked the space to do so and, if so, what the penalties might be. I have seen nothing about a cure provision for either party. The downside for Kroger is it is sure to be seen as the bully in this disagreement.

Good points Steve and you’re right, the devil is in the details of the contract. I would be surprised if a company like Kroger breached a supplier contract without consulting with their own legal counsel first to ensure they were within their legal rights to do so. But even if Kroger is within its rights, it’s still a very poor way to treat suppliers/partners. And I doubt that if this will result in any meaningful public backlash for Kroger, since these kinds of disputes happen every day and there’s really no impact to the Kroger customer.

Mark, I doubt that the public will ever become aware of the dispute and if some people do, will they even care? As you stated, it has no impact on them.

Canceling orders in retail is nothing new. Renegotiating contracts between suppliers and retailers is also nothing new. When demand is not there for any product, the first thing a retailer does is look at outstanding orders and start working on ways to cancel or delay shipments. With that in mind, there are a number of ways this could have been resolved. I would ask, is K7 in such a strong market position that they are OK alienating one of the biggest retailers in the world? A better approach I would think would be to try to work with Kroger to find solutions. Maybe negotiate a discount on this order? Move product ship windows to next year, this isn’t a fashion product with a drop dead date. Can they shift product to other accounts? At the end of the day a case could be made that this is a K7 issue for not having enough flexibility in their supply chain plan to react to unforeseen changes. I can’t reconcile in my mind any strategic benefit for… Read more »
4
|
-7
-   Share

What is curious is the private label Kroger Hand Sanitizer has basically not come back at all (I saw it once…) and there is an ongoing “hole” on the shelf where those SKUs go. I don’t know why Kroger couldn’t make a deal with this supplier to do private label and get that space filled in again.

I think usually when a retailer refuses delivery of contracted products due to a lack of space and the retailer plans to work with the vendor in the future, they will do something else like delay the order, try to get the order routed to a clearance retailers, etc.

If the facts are as presented, Kroger would not like to see me on the jury if this case comes to trial. It will be interesting to see what happens, but I would bet on it being settled without ever going to trial.

The only problem is that a lot of trust has been lost and trust is what builds strong relationships.
I remember the sign that is still out there. “We’re all in this together.”

Retailers refuse delivery all the time. Usually this is due to missed/late arrival for delivery appointment, resources to accept delivery or even capacity constraints, but most of these appointments are rescheduled in short order. If K7 showed up without an appointment, yes, it’s likely they would have been refused. So, the larger question is: has Kroger offered them a delivery slot to accept goods? If not, then why?

Sure, there may be capacity constraints with the pandemic and the holidays, but warehouses manage these constraints every day. It’s rare to see this level of escalation between manufacturer and retailer; though, routine riffs in the supply chain are not uncommon. Still, a purchase order is legal document. Notwithstanding some fundamental issue with the product, Kroger may be on the hook to honor this PO.

Something doesn’t sound right here: the product “fl(ies) off the shelf” and K7 has multiple customers – it’s not like they’re Kroger’s captive vendor — yet it’s been sitting in a warehouse for … six-plus months? Even without Paul Harvey around, hopefully we’ll hear “the rest of the story.”

As for the situation more broadly: I’m sure it happens (“often” being a matter of opinion, but certainly more than manufacturers would like) … it’s a cruel world out there.

In business if you agree to something (contractually), such as purchasing something, you must honor your commitment. Of course there are circumstances that might warrant a negotiation of some kind, but not a flat out cancellation. If it really is an issue that is as clear-cut as this, and it can’t be negotiated effectively, then it goes to court and we pretty accurately guess who will win and lose.

If the public becomes aware of this, it will further damage Kroger’s already tarnished image: canceling the heroes increase to associates’ pay in March while COVID infections were at peak highs in parts of the country, posting record profits and upper management bonuses last quarter but not giving associates raises, and not enforcing the mask order from my state’s governor, of which I doubt Virginia is the only one. While some people will never care about a retailer’s integrity as long as prices are low, more and more people do consider this, especially as online shopping has become more widespread, convenient, and comparable in cost.

Braintrust
"This is why the world is full of lawyers. Scrapes between suppliers and retailers are as old as retailing."