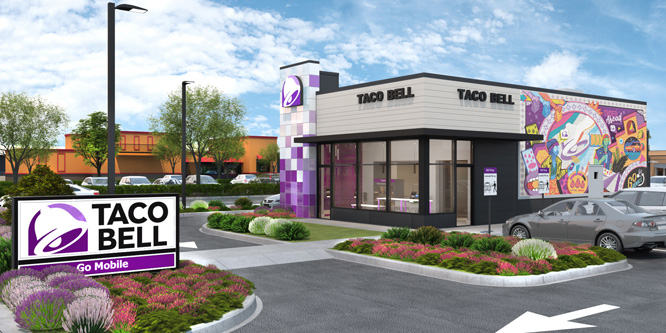 Among the updated features of the Go Mobile concept:

Taco Bell will debut its Go Mobile concept in two company-owned locations in the first quarter of 2021 and incorporate some aspects into existing restaurants.

The launch comes as many QSR chains have pared down menu offerings and rolled out curbside pick-up as online ordering has surged amid the pandemic. Starbucks, Shake Shack and Chipotle are likewise revamping drive-thru approaches.

QSR Magazine’s “2019 Drive-Thru Study” found customers spent an average of 255 seconds from speaker to order window, up from 190 seconds in 2003, due to increasingly complex menus as chains seek to differentiate and roll out mobile pick-up.

DISCUSSION QUESTIONS: What aspects of Taco Bell’s Go Mobile concept appear set to advance the drive-thru experience? What are the biggest pain points around drive-thru?

Please practice The RetailWire Golden Rule when submitting your comments.
Braintrust
"Taco Bell seems to have adopted many of the features that have made Chick-fil-A the winner via mobile ordering and drive-thru. "

"Experimenting with different ways of managing new processes is smart."

"This is how innovation should be approached. Throw out everything you have and start from a blank piece of paper."

Who doesn’t love faster and more convenient when it comes to fast food? #Winner

Taco Bell seems to have adopted many of the features that have made Chick-fil-A the winner via mobile ordering and drive-thru. The concierges are a particularly smart choice as they not only help speed up the process, but they make the wait seem shorter by serving people along the lines. The tech additions sound smart, but the proof will be in the delivery (pun intended).

Speed, speed, speed. The faster you can get a car through, the more revenue you can generate. Chik-fil-A has proven the model with tablet ordering and double drive-thrus (even at full service locations) so this is a smart way to go.

Rather than being a hybrid that juggles the competing demands of in-restaurant and drive-thru service, the new concept is designed with the on-the-go consumer in mind. Hopefully this improves the speed between order and collection which is one of the main pain points with the traditional drive-thru experience. I also like the various options for collection, including mobile ordering and pick-up from within the store. Ultimately the new format gives customers more choice and flexibility to get their food in the way that works best for them.

Bellhops: What a great back to the future idea!

Most fast food places update the drive-thru by adding another lane, Taco Bell has reinvented it. I particularly like that the app recommends the quickest way to get your food and then rewards you with additional loyalty points if you choose it. Actually, I love anything that gets me out of those claustrophobic drive-thru lines faster.

Speed and accuracy have no equals in the quest to get drive-thrus right. People have already decided to spend whatever it costs when they placed the order. But when they arrive at the pick-up window/station, the order better be ready and better be right. Obviously prepaid orders will go a long way to improving the speed factor. Fast-food kitchen technology should take care of the accuracy factor.

A great example of the pandemic accelerating adoption of Unified Commerce and customer engagement capabilities.

This is an innovative model by Taco Bell that combines multiple technologies, flow design, physical layout, and good old fashion “carhops” into a 2020s post-pandemic QSR format that rewards loyalty and incentivizes desired behavior. Both markets and consumers will have a high interest in the execution and financial results.

This is how innovation should be approached. Throw out everything you have and start from a blank piece of paper. Get rid of the legacy that ultimately is holding you back. Innovation is not tacking on the new to the old, it is throwing out the old and starting anew. Taco Bell has done that in spades.

The dual lanes will help alleviate what I think is the single largest problem — lines of cars wrapped around a building and often spilling into the street, effectively blocking a lane of traffic for as much as a block.

Faster service is always better. Getting in and out quickly during this pandemic is what we are looking for. But this will not happen by magic or by opening a drive-thru. The staff on the other side of the window is key. The speed, accuracy and most importantly friendliness will be the key to success. We are not seeing much of this, especially friendliness, at QSRs. The staff needs to know we are there to make the business successful by buying the food they are preparing.

All aspects of the Go Mobile concept appear to advance the drive-thru experience. Some of the biggest pain points are menu complexity, wait times, payment processing speed, and the kitchen’s ability to keep up. I’m pretty sure Taco Bell did their homework. What an innovative group and a fun brand.

I was not aware that Taco Bell had a drive-thru timing problem. Chick-Fil-A does. But Taco Bell? I have never had to wait. Chick-Fil-A, on the other hand, is a miserable set of long lines backed out into the streets in our world.

So it strikes me as possible that management is seeking ultimate efficiency — when they have very little to gain through efficiency.

Retailers should remember they need to keep their eyes clear when looking at situations like this. Do they have a serious problem? How much value can be added for a huge investment of this type?

Put me down as skeptical.

Clearly Taco Bell believes new mobile order and curbside pickup behaviors are here to stay long-term even in a post-pandemic world! If they are willing to introduce new restaurant formats for new locations and adapt some of these changes to existing locations then that tells us all we need to know about how consumers crave convenience from their fast food options! Other QSR brands have already demonstrated sales improvements via efficient mobile order and pickup capabilities, so it’s only natural for Taco Bell (an early pioneer in mobile apps for QSRs) to evolve their capabilities. Anything that eliminates wait-times through the drive-thru or curbside pickup will only make customers happier, and a happy customer is much more likely to return!

Very much a “back to the future” feeling of A&W and Dairy Queen locations back in the post-war period! Caribou Coffee has been rolling out “cabins” in smaller markets here in the North with many of these same ideas. One concern about using apps for navigation is the cellphone-while-driving bans: when I place a Starbucks order before getting in the car, I don’t need to keep glancing at the screen en route. Please don’t make drivers have to refer to a phone.

Experimenting with different ways of managing new processes is smart. Who wants to wait in a drive through line behind people who are trying to decide what to order when your order is ready and cooling off? Finding a way to facilitate curbside pickup for orders and creating ways to make the ordering drive-through lines go faster is smart. More experimentation is needed.

Rube Goldberg, process coordinator? I wish them well, but it seems like some of this has been overthought — “Updated technology tells cooks the fastest way to make an order” for a taco … really?

But then reinventing the wheel, or more precisely rearranging a limited set of ingredients, seems to have been their M.O. for many years.

Are the indoor shelves such that the line can be avoided altogether if a person orders in advance, parks, runs in/grabs/runs out? If so, I like this as an option.

Will they have the bellhops bring the order out? Match what Domino’s is doing so that a customer can put in their car details and the rep will bring out their order when they arrive?

This would seem to maximize the potential, here.

Braintrust
"Taco Bell seems to have adopted many of the features that have made Chick-fil-A the winner via mobile ordering and drive-thru. "

"Experimenting with different ways of managing new processes is smart."

"This is how innovation should be approached. Throw out everything you have and start from a blank piece of paper."