The direct-to-consumer kitchenware brand Our Place gets physical 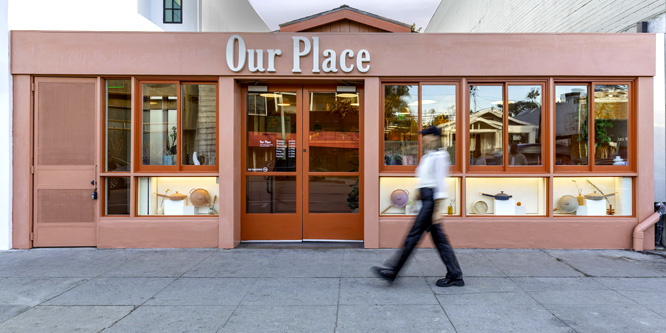 The digital kitchenware site Our Place is one of the latest online-only brands to move into brick and mortar retailing.

Our Place, which launched in 2019, just opened its first physical location in Los Angeles, the same city in which the brand was founded, according to a press release. The store is built with a cozy, home-like feel and includes a cafe that serves tea and other beverages. Our Place describes itself as “mission-driven” and intends for both the brand and the store to create a sense of community and promote the joy of cooking. In the back, the retail outlet has both stadium and cafe seating, and intends to use the space for food-related events, book launches, film screenings and the like.

Others in direct-to-consumer cookware have pursued expansion into the brick-and-mortar world through partnerships, rather than building a standalone store footprint.

Online kitchen brand Caraway recently announced that its products would be sold in 350 Target locations, according to CNBC. The company previously launched limited-location deals with other national retailers, selling a small selection of products in 80 Crate & Barrel locations, 80 Bed Bath & Beyond stores and 20 Nordstrom locations. Caraway started selling its products through Target’s website last year before launching the deal to appear on the physical store shelves.

Despite the expansion of these brands, high-end kitchenware has proven to be tough for some niche retailers as a sole focus, even those established in the space for decades.

Luxury kitchen business Sur La Table, for instance, declared bankruptcy before being acquired by luxury holding company Marquee Brands in mid-2020. Before its acquisition, Sur La Table suffered due to the consumer shift to online retail and a reduced interest in cooking at home in the years leading up to the pandemic, which then piled more pressure on the struggling business. Though Sur La Table was celebrated for its in-store cooking classes, the brand drastically reduced its store count under Marquee Brands, getting rid of at least 51 of 121 store locations.

DISCUSSION QUESTIONS: What can a brand like Our Place do to succeed and differentiate itself in a physical retail space? What strategy should it take to expand its physical footprint?

Please practice The RetailWire Golden Rule when submitting your comments.
Braintrust
"If Our Place can compete on price, they have a chance to thrive where other premium kitchenware brands have not."

As customer acquisition costs soar and the market becomes increasingly crowded with brands, it is important for many direct-to-consumer companies to have a physical presence to showcase their offer and attract new shoppers. What I like about Our Place is the community aspect of their stores — including the cafe and interactive spaces which will allow for film showings and food events. This will work exceptionally well in a community like Venice Beach.

If Our Place can compete on price, they have a chance to thrive where other premium kitchenware brands have not. The experiential concept for stores sounds like a good recipe for success (pun intended)!

I would choose the old catalog method to expand their brand to brick-and-mortar. Find out where their online customers reside and open stores in the zip codes where their customer density is greatest.

Also, they might want to allocate some budget to acquiring the ourplace.com domain (vs. the fromourplace.com they use now). The shorter domain is definitely being held for ransom, but might be worth the spend.

Excellent points Ken. I agree that the URL is clunky and when I searched for the brand it was more difficult to find. Having physical stores definitely will help the brand awareness in key markets, but the challenge for Our Place is that they have a limited line of products that will only appeal to a segment of consumers that gravitate to their style.

Adopting a new approach to in-store merchandising would be a great differentiator for them. Rather than just displaying their products as kitchenware they should consider merchandising them in the context of specific events like “dinner party,” “coffee time,” and “cooking like Julia” to give consumers more guidance on how their products work together and a sense of what they could achieve while using these products. A good example is how the Magnolia store-within-a-store in Target displays products to show how they would look together in a room setting, giving shoppers more confidence they will be happy with the product at home, and motivating them to buy multiple products to complete the look.

Make it fun! what differentiates a physical store from a digital one is the physical store for something like kitchenware can be like a trip to Disney World (maybe Epcot). Also, make virtual buying with ship-to-store or ship-to-home an integral part of the experience so whatever the consumer wants that is in the corporate inventory can be gotten.

This strikes me as a similar strategy to the Williamsburg H&M store, focusing on community. The brick-and-mortar expansion may not be to make money but to expand awareness.

Expanding brick-and-mortar should be approached carefully if that is the strategy. It must be a place that draws traffic beyond locals.

I like the return to experiential retail that’s going on — the fact that there’s a cafe and room for an entertainment-based outing makes the store a full-on destination. In addition to driving repeat foot traffic in those ways, they’ll also want to create collections that necessitate repeat purchase. Kitchenware can be a category where consumers are buying only once every few years, so messaging around new launches will be key. I’d also go one step further to suggest building a content-based app to accompany the products they sell and showcase them in creative ways.

Our Place is a brand that made its name without a physical presence. Moving into major retailers like Target would add visibility in addition to sales. The cost to build out in these stores (displays) within stores would have very little financial risk. However, building out its own stand-alone store is a different story. Is the store for retail sales or for visibility (or both)?

This is a very tough vertical that serves a very niche market. The economy has a long way down to go. I would not have opened a physical store at this time, rather bolstered the online presence. We’ll see where this ends up, but I’m not optimistic.

The pandemic changed the world, including perceptions around the idea of preparing food at home as well as increasing the focus on experiences rather than things. The New York Times cooking section seems to be more ubiquitous than ever before — referenced more than once at our annual community pie night at our home last night. Our Place has a chance to capitalize on three trends. First, they can learn from online retailers who’ve leveraged brick-and-mortar, like Warby Parker, Allbirds, Marine Layer and many others. Second, they can catch the continued wave of those wanting to prepare more meals at home. Third, they can cater (pun intended here as well) to the trend of having experiences, in this case learning to cook with others. With the right approach, Our Place, will be able to earn the right to continue to provide value to the ever new consumer.

Site selection is critical. Avoiding becoming another mall-based chain will be key to differentiating. Showing customers how to use their products to create restaurant quality family meals might leverage the “stay at home” trend of the last two years — opening this up to bookable spaces for groups of friends to go and learn might be a tactic to pursue.

Braintrust
"If Our Place can compete on price, they have a chance to thrive where other premium kitchenware brands have not."