Walmart is looking to bring apparel manufacturing back to the USA 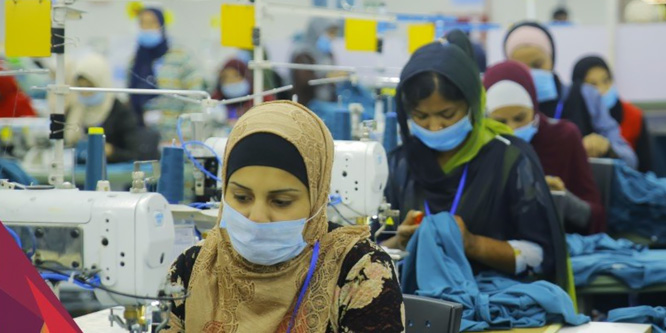 Walmart has been public about supporting American manufacturing wherever it makes business sense and that commitment was reinforced last week at a ribbon cutting ceremony for a new factory in Santa Ana, CA, that will cut and sew apparel exclusively for the retailer.

The new facility opened by Jordan-based Classic Fashion will produce garments for Walmart for the next five years. It is expected to create 125 jobs by 2023 before eventually employing 350. The factory’s opening is the first part of Classic Fashion’s plan to serve the American market. The brand is also looking to identify countries close to the U.S. to source materials it needs before being able to eventually do so domestically.

Walmart, in a press release to announce the factory’s opening, reinforced its commitment to supporting American manufacturing jobs, pointing out that nearly two-thirds of the dollars the company spends on products are either made, grown or assembled in the U.S. Last year the company announced an additional $350 billion investment to that end.

Supply disruptions caused by the pandemic have spurred increased interest on the part of brand manufacturers and retailers in bringing production capabilities closer to, if not to, the U.S. market.

A CNN report earlier this week cited last Friday’s U.S. jobs report for September, which showed 22,000 jobs being added in the manufacturing sector. That brings the total of new manufacturing jobs added to nearly half a million over the past year. Nearly 13 million jobs in American factories puts that number at its highest level since the Great Recession.

The reality is that even more jobs could be added if there were workers to fill them.

“For every 100 jobs openings in the sector we only have 60 people who are looking,” Jay Timmons, CEO of the National Association of Manufacturers, told CNN. “I think it’ll take quite a while to fill that pipeline.”

DISCUSSION QUESTIONS: Does “made in the USA” messaging hold more sway with American consumers today than it did 10 years ago? What do you see as the biggest obstacles to bringing back clothing manufacturing to the U.S.?

Please practice The RetailWire Golden Rule when submitting your comments.
Braintrust
"Will the price point on Walmart’s American-made goods be the same as items made overseas? That’s the $350 billion question."

"It is no coincidence that after electronics, China’s biggest export is factory machinery. Apparel doesn’t even make the top 10."

During the pandemic, we learned that “Made in the USA” can often mean “available at the shelf or on the rack.” Retailers have to balance the low cost of overseas production with shorter lead times and better product availability. Kudos to Walmart for executing that strategy.

I worked for an apparel retailer a while ago and we tried to do this exact thing with very little luck. The entire infrastructure of apparel manufacturing in the U.S. is completely outdated and pretty much gone with a few, very small exceptions. The lead times were longer, the garments weren’t to quality standards and they were very expensive. I certainly hope Walmart has the patience to make “Made in the USA” work on many levels, but we sure didn’t. This kind of thing is good PR, but it’s a long, long road to success, especially with a very spoiled American consumer.

“Made in America” is meaningful to lots of shoppers, but for different reasons. For some, it’s the patriotism play. For others, though, it’s more about ethical production. For retailers, it’s also about gaining better control over the supply chain. The pandemic wreaked havoc on the supply chain, and a shorter pipeline equals happy retailers and customers. Both want their product quickly, and on-shore gives them that benefit. Meanwhile, systems that give real-time visibility throughout the supply chain have become critical to retailers and to managing the customer journey.

Now, will the price point on Walmart’s American-made goods be the same as items made overseas? That’s the $350 billion question.

Or … the price points probably will be higher. And/or the initial margins lower. But can the gross margin $$$ be higher with shorter lead times that reduce over buying and end of season markdowns. I’m guessing there’s a model here where the math works. This is not a simple flag waving exercise.

I don’t think most consumers necessarily care where their products are made, as long as they’re high quality and available when needed. This move should allow for more control over inventory levels, though, which will make a difference to customers.

I would change the first “most” to “some” or, at worst, “many.” There is a whole middle of the country that, I believe, does care.

I’m not trying to be cynical about this, but there is more than one reason to foment domestic manufacturing, and the other reasons are not all altruistic. Dependency on the stability of foreign countries, exposure in the supply chain, appeal to a (false) sense of patriotism, and increased gross margins are some of the others. Let us not be fooled.

Nothing cynical about it. Manufacturing here just makes good business sense. I think we just learned that.

How ironic that Classic Fashion is Jordan-based. And I say that as a hats off to Jordan and the Classic Fashion team. Seems they beat all the speech makers regarding reshoring.

While some consumers are influenced by “Made in the USA” labels, many don’t made purchase decisions solely based on where products are made. Walmart’s decision to make more products in the U.S. is most likely driven by the desire to reduce the impact of global supply chain disruptions. The side benefits are that it creates more jobs in the U.S. and it has a positive impact on brand perception.

Until the 1990s half of the nation’s clothing was manufactured in the U.S. and was a major employment sector for the country. Today 95 percent of the country’s clothing is imported from outside the U.S. As trade rules such as NAFTA and the World Trade Organization moved production to countries with cheap labor models the focus of production became price instead of quality and fulfillment time. But like all things, economies — and consumer demands — change. Today most brands and retailers rely on Just In Time procurement practices to help manage capital costs, but global uncertainty, quality control issues and uneven demand from online shopping mean having your suppliers closer is becoming critical to making business models work.

It is a great move to bring jobs and manufacturing back home, it feeds the economy and loyalty to your brand. The only issue is going to be if labor shortages create high wage inflation and a shortage of workers. Here in the UK unemployment is at its lowest for over 50 years and it is becoming increasingly difficult to find staff. The hospitality industry is already under huge pressure to find staff and more investment in manufacturing here would only exacerbate that problem.

Just the other day I mentioned that before making a purchase I don’t check to see if my clothing or other products are made in China. If Walmart promotes its commitment to manufacturing in the USA, I think it can make a difference. Challenges related to quality and cost have to be mitigated for Walmart’s message to motivate shoppers for the long term. Hopefully 125 jobs will evolve into more and more future opportunities for those who have left the manufacturing work force.

Yes, “Made in the USA” is more influential now than a decade ago. Consumers appreciate how shortening the supply chain helps to control costs, availability and domestic jobs.

Apparel manufacturers will still need to keep costs down and source raw materials from global suppliers.

Like consumers’ response to polls on environmental products until it comes down to making the purchase, consumers will say “Yay, American Made” until they actually buy the product and never look at the point of manufacture.

The biggest obstacle is manufacturing infrastructure in the U.S. It would take massive amounts of investment to be reasonably competitive with foreign-made products. Be assured that foreign-made apparel today is mostly made with the best, fastest technology available.

It is no coincidence that after electronics, China’s biggest export is factory machinery. Apparel doesn’t even make the top 10.

In theory, many Americans would prefer products “made in America” but probably more for political than economical reasons. Inevitably the cost of goods will be higher, so we’ll have to see if the cost plays out to be worth the increased price tag. Unfortunately, I think the American dream has swayed people from blue-collar jobs, and hiring and retaining talent will be difficult. As we know, hiring is even a challenge for higher-paying jobs at the moment. My hope is that this plays out well for Walmart, and we all embrace any work as valuable and contributing to society.

The Made in the USA movement has gained momentum, particularly in the post-pandemic, inflationary, and uncertain macroeconomic climate. Walmart’s $350 billion investment in domestic manufacturing jobs, supply chain infrastructure, facilities, capabilities, and people is commendable. This will undoubtedly resonate with the emerging conscious consumer, who has become increasingly aware of their carbon footprint and the impacts of their purchases.

However it has been decades since the U.S. has had a significant apparel manufacturing presence. The domestic apparel operating model has a long way to go to reestablish itself as a viable and affordable option to serve a customer that has become accustomed to quality products at an affordable price and with reasonable lead times. It will take more than Walmart’s investment to achieve the economies of scale, efficiencies, and an agile operating model to compete with the well-established China apparel manufacturing machine.

I think it holds a bit more, but that is — paradoxically — precisely because it’s more rare … or at least the perception is that it is.

If memory serves, we’ve had this one act play before: Walmart (or someone) makes a big show of announcing a “made in America” campaign. everyone applauds it, and then it quietly dies as it becomes painfully obvious the numbers don’t work. Do I think this time is any different? Well, if you want me to believe it, tell me what has changed,

Braintrust
"Will the price point on Walmart’s American-made goods be the same as items made overseas? That’s the $350 billion question."

"It is no coincidence that after electronics, China’s biggest export is factory machinery. Apparel doesn’t even make the top 10."