Walmart to take another shot at Netflix and Amazon, too 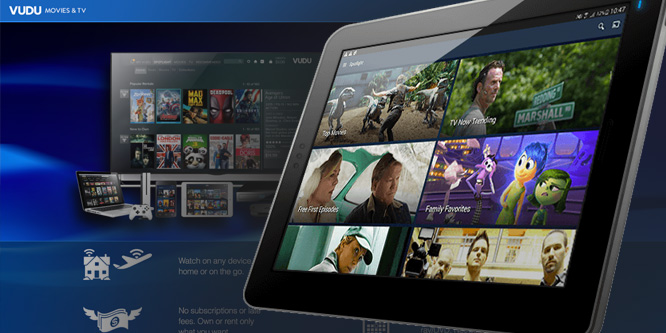 Over the years, there have been numerous reports about Walmart’s plans to move into the video rental business with the goal of supplanting the current leader at the time. Now, according to a report by The Information website, the retail giant is considering another shot at the business with a subscription service that will allow members to view movies and television shows at a price below $8 a month.

The new service is reportedly being designed to take on Netflix, which offers plans between $8 and $14 a month, and Amazon.com, with its Prime Video service for $8.99 monthly. Other companies, including Apple, Disney and Hulu, also compete in the space.

Walmart owns Vudu, an online platform where consumers can rent or buy movies and TV shows on an individual or bundle basis. The platform also offers some free, ad-supported programming, as well. Walmart began integrating Vudu on walmart.com in 2011.

So, how will Walmart differentiate from other services? It plans to target its content to middle America, an audience management believes has been largely ignored by others, according to anonymous sources who spoke with The Information. As with Netflix, Amazon, etc., Walmart is prepared to invest in original content and give subscribers reasons to pay for the service in addition to or in place of the others.

The retailer hasn’t been shy about making investments in recent years with the acquisitions of Jet.com, Bonobos, ModCloth, Moosejaw and other e-tailers operating in the U.S. and abroad.

While Walmart did not respond to the most recent reports, capturing share of the video market has been a goal of various management teams at the retailer going back to at least 2002. Back then, the retailer began testing an online DVD rental service to compete with Netflix (founded in 1997) and Blockbuster (there’s one U.S. store left in Bend, OR), only to eventually discontinue the program.

Netflix’s stock took a hit this week after the company announced it added 5.2 million subscribers during the most recent quarter, about one million below plan.

DISCUSSION QUESTIONS: Do you think Walmart can be a force in the streaming video market? What opportunities do you see for Walmart in this market? Where would the service fit relative to Walmart’s acquisitions and other deals over the past few years?

Please practice The RetailWire Golden Rule when submitting your comments.
Braintrust
"Walmart management has to realize that this is a long-term play. "

"For Walmart to get into the streaming video market, it basically has to change its charter from being a retailer."

"Yes, Walmart absolutely has a shot in VOD. The Vudu platform is beautiful. In its current state iTunes is its only competition..."

15 Comments on "Walmart to take another shot at Netflix and Amazon, too"

Walmart can have an impact in any segment it chooses to compete — including streaming video — but that doesn’t mean it will be successful or that it should. The battle in streaming video is content and content development, and that’s why Netflix and Amazon are investing heavily in it. The market is already highly competitive and creating quality content is very difficult to do and unpredictable. With so many other more important areas to focus on, I don’t see any significant upside for Walmart in pursuing the video streaming segment.

It’s not going to be easy, and there is a long way to go to get Walmart up to Netflix standards. However, if they put more effort into it and keep the politics out of the equation (unlike the Blockbuster fiasco), Walmart has a chance. But Walmart management also has to realize that this is a long-term play. Monitoring profitability on a quarter-by-quarter basis in the early phases will only kill the business.

With the Walmart-Microsoft alliance, and perhaps a Prime-like offering (including their video services), maybe there is a play to mimic Amazon and provide the market with more choice. For consumers, choices are a good thing! Good luck, Walmart.

I guess given enough time and money there’s a slim chance for viability, but the bigger question is, why? Does offering video make a Walmart customer stickier to the brand? With all the choices already on the market it’s hard to see how Walmart will get enough share to be worthwhile. Amazon does video in some part to keep customers feeling good about the value of the increasing Prime membership fee. Walmart is running on a “no membership needed” basis. Copying Amazon step for step as part of a digital strategy for Walmart makes little sense to me.

I think you make a good point with “stickier.” Demand for video product is huge and growing. I think it’s a market worth chasing even while acknowledging they will never be the leader. If they can prevent some portion of their customers from peeling off and going to another video supplier, great. I’ll want to see more of HOW they execute before going thumbs down. They are choosing to compete, which can only be good for the consumer.

Never underestimate Walmart! While the streaming video market is currently dominated by Netflix and Amazon, maybe Walmart can carve out a third niche. Walmart has been on mission to add digital-first businesses to its portfolio and video streaming may be a logical addition. The big test is if they can get enough consumers to switch from the big two (an unlikely scenario) or if they can entice consumers to add a third service. It is a tall order!

Walmart should focus on beating Amazon where they can. For a retailer with a heavy physical footprint, how many wars can they find themselves in a position to win? Battling against Netflix with 100 million plus subscribers (which excludes the rest of the world utilizing a friend or relative’s account) as well as Prime Video seems untenable. And with the timing, is this another PR signaling play with Netflix’s recent announcement?

There are more than a dozen easy-access streaming services. People choose one over another because of the programming (though multiple services often offer the same TV and movies). Or because of a legacy connection — Netflix because they have been using it for years or Amazon because one is a Prime member.

How will Walmart’s service break into this competitive landscape? Maybe for the Walmart customer it will have to be all about price?

Is there anything new that Walmart can bring to the streaming video market? I think not. While Walmart may be able to skim some business away from Amazon, Netflix and others, I don’t see that this service brings any more value to their brand. If they intend to invest in producing original content that would be an interesting wrinkle. Walmart Studios? Who knows!? In this seismically-changing landscape, nothing seems to be out-of-bounds.

Yes, Walmart absolutely has a shot in VOD. The Vudu platform is beautiful. In its current state iTunes is its only competition, offering to only buy or rent a movie and it is $1 cheaper than iTunes to buy or rent. If they start making their own content and undercut Netflix’s subscription service, even better! I guess people will call Generation Z out about not being loyal, but at the end of the day we want to save money where we can, so we can make a purchase somewhere else. Someone here said the biggest question is “why?” No, the biggest question is “why not?” This has Nothing to do with Walmart’s shoppers. It has to do with taking a huge piece of the streaming business pie. One thing has nothing to do with the other. But Walmart can advertise special Vudu offers to its customers and let their shoppers and the rest of the world know they are streaming content and all are welcome to their “every day low video streaming prices!”

Walmart has the size, audience/consumer base and the financial ability to move into almost any business. This is an interesting concept. I wonder if getting into the business and competing against Amazon Prime and Netflix is a good move. How many Primes, Netflixes, Hulus, etc. can be successful in the marketplace? Or maybe aligning with a company already in the business (obviously not Amazon Prime — Amazon being the arch-enemy of Walmart) — Netflix, Hulu, etc. — could make for a good partnership. Walmart’s customers and Sam’s Club members could be a natural feed to these other companies. Working on some type of a joint venture could be the play.

At this point, I’m starting to wonder if Walmart’s top execs are thinking that they need to be in every major business that Amazon is in in order to stay competitive? Maybe that is true, to the extent that they almost want to be everything to their middle and lower income customers. But, as Charles Dimov said, this and many of their other ventures are long-term plays, so I hope they have the fortitude to stick with them long enough and focus enough resources on them that they have a chance to succeed. Meanwhile, I wonder if there will ever be a tipping point for Amazon or Walmart, where they have too many ventures going to be really good at many of them?

I just love the fact that Walmart isn’t taking the Amazon juggernaut sitting down. America’s most competitive retailer BY FAR. About time a retailer said, “oh yeah? take that.” Go Bentonville (never thought I’d have to say that)!

Walmart is large enough to engage in some “test-and-learn” ventures with regard to streamed digital content. The Vudu platform already enables a log-on using one’s Walmart.com credential. Unlike Amazon or Netflix, its free content is ad-supported, which provides an alternate revenue model.

Why wouldn’t Walmart make an attempt to capture a slice of the streaming content market? The cost of digital goods approaches zero at large volumes. There are some interesting co-advertising possibilities with Walmart suppliers and its private label brands that other existing channels could not execute.

I’m not sure if or when Walmart would want to get into the production business, like Amazon, Netflix, Showtime and HBO. For now, operating a digital content store seems like a pretty good bet for the world’s largest physical retailer.

This one is going to be interesting. For Walmart to get into the streaming video market, it basically has to change its charter from being a retailer. I tell people that Amazon is a service and data company that happens to do retail, but really sells services and experiences from shopping to entertainment to data services. Is Walmart willing to go through a transformation like that to compete against Amazon in the future?

Seems like a tough market sell. Vudu is 7 years old and could have done this before. Huge installed base thanks to pre-loaded devices. Entering an already crowded market seems like an uphill climb but more power to them.

Braintrust
"Walmart management has to realize that this is a long-term play. "

"For Walmart to get into the streaming video market, it basically has to change its charter from being a retailer."

"Yes, Walmart absolutely has a shot in VOD. The Vudu platform is beautiful. In its current state iTunes is its only competition..."