Was Amazon’s Prime Early Access sale a bellwether event for the retail industry? 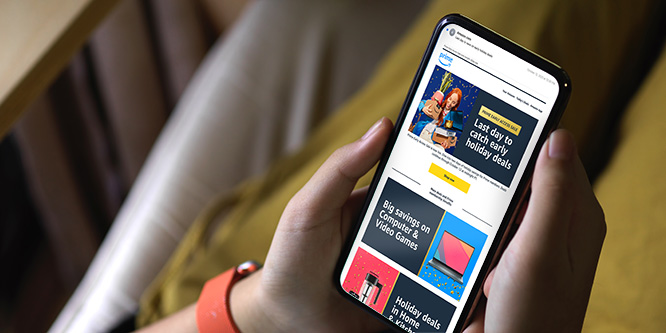 Amazon.com last week held its second Prime Day event of the year and, as it turned out, the sales promotion may not have been the kickoff to the holidays that the retail and technology giant was hoping for.

The Prime Early Access sale two-day event, as its name suggests, focused on giving Amazon subscribers a jumpstart on buying Christmas gifts. The company’s Top 100 deals list included its own devices as well as products from Apple, Bose, Casper, Drybar, Laneige and Shark.

“Our Prime Early Access Sale was a great kickoff to the holidays, and the best part is that it’s only the beginning. Customers will find millions of must-have deals throughout the season that will help them continue to save money on gifts for loved ones,” said Doug Herrington, CEO of Amazon Worldwide Stores, in a statement. “We know our employees, vendors, and selling partners show incredible dedication to delivering a great experience during the holidays, and we are grateful for their continued commitment to serving customers during this special time of the year.”

Amazon, as it has in the past, touted the role that the sale played in driving sales for its third-party marketplace sellers. The company said that “more than 100 million items” were purchased from marketplace sellers, although it did not release sales figures to quantify the impact that the promotion had on revenues.

Analysts at Bank of America estimated that the sale generated $8 billion in gross merchandise value, down from the $10.7 billion that Amazon rang up during July’s Prime Day event.

Numerator found that the value of the average basket was $46.68, down from $60.29 in July. It found that the top five items purchased were Amazon Gift Cards, Amazon Photo Projects, Mellisa & Doug toys, Simple Joys by Carter’s clothing and Echo Dot third generation devices.

The most frequently purchased categories were found to be household essentials (29 percent), health and beauty (27 percent), apparel and shoes (26 percent), toys and games (23 percent) and consumer electronics (23 percent).

Twenty-nine percent in Numerator’s research took advantage of the sale to buy holiday gifts. Of those, 69 percent completed less than half of their holiday shopping. Ninety-five percent said they would likely shop on Amazon again for more holiday purchases.

DISCUSSION QUESTIONS: Do you see the results of Amazon’s Prime Early Access event as a bellwether for the company’s 2022 holiday season performance or that of the larger retail industry? How is this event and others run by Target, Walmart, et al likely to affect retailers’ pricing and promotions after Halloween?

Please practice The RetailWire Golden Rule when submitting your comments.
Braintrust
"This may be yet another example of Amazon ruining it for everyone through overkill."

19 Comments on "Was Amazon’s Prime Early Access sale a bellwether event for the retail industry?"

The Prime Early Access sale was far lower key than Prime Day. Even the name of the event is a mouthful and reflects internal marketing-think rather than keeping things simple for customers. Promotion was also much lower key and there was much less buzz about it on social media. That said, I am sure the event drummed up trade for Amazon – but the truth is consumers are more constrained and under more pressure. What all of this signals is that while the holidays will be OK, retailers will need to work hard to persuade shoppers to open their wallets. They will also need to be patient as consumers will shop on their terms and in the time periods that work for their finances.

More recession + more events from more retailers = less $$$ per event. That’s just not surprising. In this environment it is becoming increasingly difficult to see where all this excess inventory is going to go — and when. Expect ripples through spring 2023.

Sorry, you don’t feel things with a deal. I expect physical stores to be fine this holiday season. I think more and more people are tired of scrolling and returning.

Comparing the estimated sales results of the Prime Early Access Sale to the July Prime Day results might not be the best barometer for success, as it is not an apples-to-apples comparison. That said, it may contain some early warning signals that consumers may be reducing their holiday budgets. Inflationary prices on everyday products may be cutting into consumers’ discretionary budget, which is not a good sign for holiday spending.

After Halloween, expect a higher marketing spend among retailers, including more aggressive pricing and promotions.

Personally, I’m pessimistic about holiday 2022 for retail given the economic headwinds consumers are experiencing. That said, I don’t know that it’s a good comparison. This year’s version of the pre-holiday sale by Amazon didn’t have nearly the promotional support that last year’s Prime Day did.

I wouldn’t blame inflation alone for this one. Consumers are getting promo’d out and becoming desensitized to the flood of crafty holiday pitches that pop up earlier every year. This may be yet another example of Amazon ruining it for everyone through overkill.

Walmart and Target may be getting better at blunting Amazon’s promotions as well – they certainly weren’t sitting idly by. Even small web merchants were jumping in; Amazon may call the tune but they aren’t able to dictate how the dance goes like they used to.

Well said, Scott. Others may follow Amazon’s timing, but are making it their own regardless.

It’s not surprising that this event performed less than expected. Unlike the July Prime Day event, the Early Access event was not as well publicized nor as social media driven as the July event. However I do not see any reason to consider the Early Access event to be the bellwether for the 2022 holiday season. Though the primary challenge will be to convince inflation-concerned consumers to open their wallets during the holiday season.

Discretionary budgets are tightening with the continued inflationary pressures on consumers’ wallets. It’s not a surprise that the numbers were lower and I do think this is a harbinger of things to come for holiday online shopping. That said, I think consumers will be willing to visit stores in-person as they seek out fun experiences, despite having smaller budgets.

Shoppers are still recovering from back to school so they aren’t yet in a holiday shopping mood, so it’s not surprising the sales numbers are lower than July’s event. Time will tell whether shoppers come back to Amazon when they do start gift buying, or whether they are Amazon’d out or looking for an in-store experience.

Amazon’s (relative) lack of success may well be an omen of things to come this holiday season. I think this tells us two things. First, fueled by 24 x 7 media reports, consumers are uncertain about the near-term economic outlook. Second, maybe we should stop promoting holidays seemingly year-round. Consumers are getting tired of being told the “best deals” for the holiday season are only available in April, and May, and June, and July, and August, and — well you get the idea.

This may be just too early to get people shopping for the holiday, there is still a lot of uncertainty and people are worried about the cost of living. They may also be taking the view that there will be lots more “sale” opportunities to come which may offer better value. This is going to be a very tough year for retailers to make profit and show they are keeping down prices for their customers, promotional activity is going to be fierce and customers know there will be other opportunities.

Consumers are worn out with Amazon events like this so it’s not surprising that sales would be mediocre. I certainly don’t think this reflects on the season. Any weakness in sales is Amazon’s for reaching too far by doubling on what is an OK thing once a year but not twice.

Yes, if Amazon is impacted by an economic slowdown then other retailers will be as well. But given the inventory issues, we’ll continue to see promos to clear shelves even if consumer spending slows.

I’m noticing many retailers having sales. Specifically, we’re seeing holiday sales happening in October. Part of this is to help clear out an excess in inventory. The pandemic and supply-chain issues created havoc with inventory levels. It won’t surprise me to see retailers doing what they can to get control of inventory. Smaller retailers – and those who don’t have inventory issues – will have to play in the game in order to compete.

Many retailers are looking to capture holiday sales sooner than usual to secure their share of the consumers’ budgets. Future economic uncertainty is driving the early holiday promotional start and altering consumers’ buying behavior. Amazon’s results underwhelmed and are cautionary for online holiday sales. However, in-store sales and basket sizes will vary by segment, offers, how well the store is merchandised, sales associates’ preparation, and the overall purchase experience. The economic headwinds are not going away any time soon, so pulling in as much sales revenue as early as possible is the popular path to ensuring a sufficiently strong Q4. Without such momentum, retailers will struggle in the post-holiday period.

It is apparent from the performance of all major retailers that customers’ spending on discretionary items has decreased. Deals and promotions do influence purchasing choices significantly. However because of the skyrocketing inflation, customers have started prioritizing necessities.

Braintrust
"This may be yet another example of Amazon ruining it for everyone through overkill."