What happens now that Nike has called off its deal with Amazon? 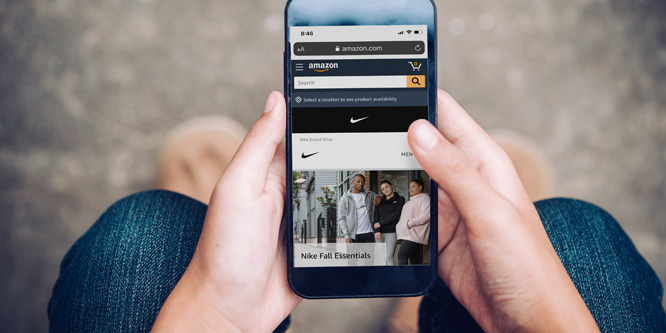 In 2017, Nike was hoping to reduce the sale of counterfeits and increase those of its own products when it signed a pilot deal to sell directly to Amazon.com. Whatever benefits Nike derived from its direct business relationship with Amazon evidently weren’t enough. The brand is ending its test with the e-tail giant.

A statement issued by Nike says the company intends to focus more on its own consumer direct efforts along with “distinctive partnerships … with other retailers and platforms to seamlessly serve our consumers.”

The development comes on the heels of last month’s announcement that former eBay CEO John Donahoe will take over as Nike’s chief executive in January.

Many see Mr. Donahoe’s hiring as a sign that Nike intends to ramp up its consumer direct digital transformation strategy. Nike, which generated about 15 percent of its sales from its own website and retailer partner sites last year, has previously said it sees that percentage rising to 30 percent by 2023. The company expects that online sales of its products will eventually surpass those sold in stores.

Nike reported that sales for its first-quarter ending on Aug. 31 were up seven percent overall, driven by a 42 percent increase in digital sales. Earnings for the quarter were up 28 percent.

In August, the brand launched Nike Adventure Club, a digital subscription service providing sneakers to kids between the ages of two and 10. Members can choose from three different options, which range from receiving four pairs of sneakers per year up to 12 and costing $20, $30 or $50 a month. Nike rolled out the program after a pilot that involved 10,000 members.

The decision by Nike to end its deal with Amazon may raise questions about an agreement it signed with Walmart’s Jet.com in 2018. At the time, J. David Echegoyen, Jet.com’s former chief customer officer, told Business Insider that its deal with Nike differed from others the brand had signed that featured “a mere assortment of basics” sold online.

DISCUSSION QUESTIONS: What will the end of Nike’s deal with Amazon mean for each company in the short- and medium-term? How likely is it that other brands will follow Nike’s lead in cutting ties with retailers to focus more on direct sales to consumers?

"As a large, well known brand, Nike does not “need” Amazon. Consumers who want to buy Nike will find a way to buy Nike."

"Consumer direct can be a perilous choice. Intermediaries deserve to exist to the extent that they add value for the brands they distribute."

16 Comments on "What happens now that Nike has called off its deal with Amazon?"

This is an important move for Nike and a strong signal to the market. As a leading global brand, Nike has the gravitas and marketing savvy to go it alone, showing that you don’t need Amazon to be successful online. Given the depth of online knowledge that Nike’s new CEO John Donahoe has as the former CEO of eBay, it will be very interesting to see how this plays out. In the short-term, this will have no significant impact on Amazon or likely Nike, but in the long-term, it may be a different story if other major brands follow Nike’s lead. For now, I think other brands will be watching very closely.

I can’t keep up with Nike, to be honest. Every year, it completely changes its strategy. Spend millions on stores (we have one on Lincoln Road) and then declare within a year of completion that it’s only going to focus on 12 worldwide and Miami is not one — but Amazon will be a key partner. Then Jet will be a key partner. Now this.

It’s a very jittery management process. I will say the stores are VERY operationally efficient. I question the merchandising a bit, and the use of space, but these people do know how to use technology in the store.

I think the most important thing is to settle on SOMETHING … It’s certainly not a role model for any other brand manager or retailer.

I agree that brands need to commit to a strategy and execute against it for long-term profitability vs. quarterly growth.

The key phrase is “distinctive partnerships.” Nike wants to control its brand destiny and obviously sees the Amazon environment as a commoditized space. Under its new leadership, Nike is focusing on its direct-to-consumer options. That means turning down businesses that compromise or distract from that focus. Nike’s new motto could be “Just don’t do it.” Nike’s decision sends an important signal that platform partnerships don’t have to last forever and sometimes building makes more sense than bridging.

“Commoditized space” is a great way to put it! Probably necessary for many businesses just looking for entry into the market. Totally unnecessary for brands at Nike’s level of development. Amazon might have become the big box department store at the end of the mall for some brands. Better to be your own specialty store and tell your own story.

Nike does not need Amazon — you said it best with, “sometimes building makes more sense than bridging.” Maintaining their brand promise is key to Nike’s growth over the next three years.

It is definitely a power play between two giants. The biggest risk a retailer has when selling via Amazon is price contamination and loss of control over the brand story. The biggest benefit is access to more consumers that are slightly more price-conscious. It is a difficult trade-off for any brand to make. However, with Nike being the first, there is a chance that other brands that want to either expand their own DTC e-commerce business or take back some control will now feel more empowered to do so.

This is a smart move for Nike – they control the narrative on their own site as well as the data on their customers. Because of Nike’s brand equity, they can afford to do this – other brands don’t have that luxury and still need other retailers to drive revenue and grow.

Interesting move. Still, I don’t think many brands have the scale and breadth that Nike does, so I don’t see a mass exodus. Their site is actually better than Amazon’s in my opinion anyway. Also, Nike is still on Walmart’s marketplace, which is prolific. Would’ve been cool to be a fly on the wall at Nike when this decision was made. Seems like a power move to me (you need us more than we need you). We shall see.

As a large, well known brand, Nike does not “need” Amazon. Consumers who want to buy Nike will find a way to buy Nike. Its 2017 partnership with Amazon was an attempt to cut down on counterfeit sales on the marketplace. Since then Amazon has developed, and continues to develop, ways to stop the sale of counterfeit items on its site. Amazon still has a long way to go in this effort, and it may be that Nike is not seeing enough benefit from their efforts to continue the partnership. Selling direct to consumer will allow Nike to continue to control their message and pricing in a way that can’t be done on the Amazon marketplace.

Managing the shopper experience in a controlled environment is proving to be more and more important to brands that don’t compete on price. More premium brands are pulling away from marketplaces and wholesale business models to emphasize their direct relationship with consumers. For too long brands have relied on third-party distribution strategies where they lose on margins and experience.

Nike is making a strategic move by backing away from the Amazon.com platform. It may have enough clout on its own to make it work, but its departure may also leave a power void on Amazon that others will rush in to fill. That could include Amazon PL products, as well as rival sporting goods brands.

Since Amazon is very often the first search location that shoppers access when looking for products, Nike must have calculated that its own brand equity will be strong enough to be “found” elsewhere.
Consumer direct can be a perilous choice. Intermediaries deserve to exist to the extent that they add value for the brands they distribute. It will be interesting to observe whether Nike can improve its fortune by stepping back from the world’s largest distribution platform.

Nike can succeed without Amazon because they are Nike. Can other brands that lack their size and stature say the same? Maybe not.

While it’s safe to assume Nike no longer sees the benefits of the Amazon deal, perhaps the real answer is that they are declaring “mission accomplished.” Maybe they achieved the objectives they had for that deal in 2 years’ time and they now conclude they simply don’t need to continue. Part of the original announcement was that they were doing this to stop counterfeits, so perhaps that goal was achieved. In any case, this is likely to cause other brands to pause and re-evaluate their Amazon relationship. That determination will be dependent on how effective their own DTC capabilities are. Nike clearly has an edge here that not many other brands share.

I don’t doubt that Nike will do fine on their own — they have massive brand equity and raving fans. But will this mean that Nike products on Amazon will now largely be counterfeit and gray market? Not great for Amazon’s credibility.

I agree with Kiri’s comment that this leaves Amazon with grey and black market goods. Nike will still have a presence, just not the kind it can control. Leakage through distribution channels is so prolific that shoppers will continue to find Nike on Amazon, perhaps to their shopping disappointment.

As others have mentioned, Nike is singling out Amazon over other marketplaces. This may be the early influence of Nike board member John Donahoe before he becomes CEO John Donahoe. Donahoe joined eBay in 2005, shortly before Amazon’s growth rate surpassed eBay’s, a position it has never surrendered.

According to Bloomreach, more than half of online shoppers start their product searches on Amazon. If you’re not on Amazon, you’re missing out on consumers who are looking for products like yours.

But here’s the key: You don’t have to sell to Amazon to be on Amazon. It’s important that brands don’t cut ties with Amazon entirely. Rather, a brand should take a look at its relationship with the platform and see what it can be doing to better market its products on the site and fulfill quick-ship orders by engaging a third-party, full-service retail partner. These partners can help businesses navigate the vast, complex, and ever-changing arena that is the Amazon Marketplace, and help a retailer’s products reach their true potential.

"As a large, well known brand, Nike does not “need” Amazon. Consumers who want to buy Nike will find a way to buy Nike."

"Consumer direct can be a perilous choice. Intermediaries deserve to exist to the extent that they add value for the brands they distribute."