What price will Target and other retailers pay for their holiday sales promotions? 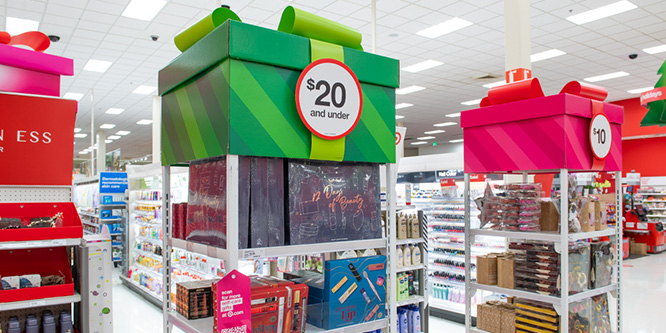 Target’s same-store sales have been trending in the wrong direction.

The retailer, which posted a 2.7 percent third quarter gain in its comps, saw its store traffic increase 1.4 percent on top of a gain of nearly 13 percent in 2021. Target’s average ticket also improved 1.3 percent.

Comps broken out month by month show a 2.8 percent gain in August, followed by a four percent increase in September. October proved challenging, with same-store sales declining 0.9 percent. This occurred despite the Target Deal Days promotion run between October 6 and 8.

Target CFO Michael Fiddelke, speaking yesterday on the company’s earnings call, called it “notable” that there was a “dramatic change in the pace” of the chain’s sales in October.

“The month began with an initial round of holiday promotions from Target and some of our competitors. And in that week, we saw a high single-digit increase in comp sales compared with last year,” he said. “For the remainder of the month, we saw a low single-digit decline in comp sales over those last three weeks. Nearly all of the slowdown was driven by our discretionary categories, apparel, home and hardlines as our guests became increasingly cautious in their spending in those categories at both Target and throughout the industry more broadly.”

Mr. Fiddelke said that Target has begun November with sales “trends consistent” with what the retailer saw at the end of October.

Target reported a 24.7 percent gross margin during the third quarter, an improvement of over three points from the second quarter, but “far short” of  its goal. Mr. Fiddelke put most of the blame on consumers waiting for sales deals before they make a purchase. The retailer saw this trend intensify in the back half of October.

“While we anticipated a highly promotional environment this fall, given the excess inventory we’ve been seeing across retail, this enhanced focus on promotions reflects an increasing level of stress on consumers, as they navigate through multiple headwinds, including persistent inflation and rapidly rising interest rates,” he said.

A second factor cutting into Target’s profits is shrinkage. The retailer said that it has seen its gross margin reduced by $400 million to date due to “inventory shortage” and expects that number to grow to more than $600 million by the end of its fiscal year.

DISCUSSION QUESTIONS: Are Target’s October and early November sales trends consistent with what’s taking place across retail?  Do you expect that profit margins will be significantly compressed during the fourth quarter as consumers wait for sales promotions before making purchases?

Please practice The RetailWire Golden Rule when submitting your comments.
Braintrust
"Whether the last three weeks at Target constitute a trend or a bump in the road, it’s clear that most retailers will need to sacrifice gross margin this season."

17 Comments on "What price will Target and other retailers pay for their holiday sales promotions?"

Promotions started earlier and they are running deeper than last year. However what’s becoming clearer is that they are not really driving volume. The latest retail sales results show this. This essentially means retailers are giving away margin just to stand still. Of course, maybe that’s needed; maybe without promotions the results would be a lot worse. However what’s certain is that profits are under real pressure in retail and that’s the key thing to watch once the Q4 results come through.

Target is a massive enterprise and adjustments take quarters to resolve, not months. Target is still managing down its excessive inventory and this will impact profitability, including in Q4. But let’s keep these results in perspective: same-store sales were still up 2.7 percent and they made meaningful progress on markdowns during the quarter. Notwithstanding these adjustments, I remain confident in the leadership and operators at Target.

In “regular” times, those comps would not be bad. An increase in traffic is also good. Grocery sales were still strong. But I can’t understand why Target expected the arc of the second half of 2021 to continue into 2022. There was serious pent-up demand. There was some money in people’s pockets. Now, much of the demand has been satisfied.

I have said for a really long time that one could not assume 2021 sales would be comparable to anything. I suppose if I had the patience, I’d roll back to 2019 and then roll forward, stripping out the outliers that were 2020 and 2021 and assume a more “traditional” trajectory.

I’m disappointed that Target made this mistake and overbought in the end. Profit margins will be depressed until inventory becomes scarcer again. It’s that simple, really.

Disappointing is exactly how I would describe Target’s forecast and position. Most retailers overbought and brought in inventory early to avoid supply chain disruption.

The fact is more supply doesn’t equal more demand. It never has and never will. Getting to the bottom of why inventory is managed in such archaic ways and rethinking assortment planning so that retailers stop overbuying is critical.

Stores have excess inventory. They have to sell through the inventory and take a bath on profit margin. There is less discretionary spending due to inflation and economic issues and there is a shortage in labor to manage the inventory. Target is experiencing the same thing as other retailers. The original plans aren’t working and now they will have to either be patient or go further into margin investment to sell the product.

Whether the last three weeks at Target constitute a trend or a bump in the road, it’s clear that most retailers will need to sacrifice gross margin this season. They are faced not only with a shopper with heightened expectations of deep discounts, but also (in many cases) with huge backlogs of seasonal inventory. The stores still working through “pack and hold” apparel from 2021 have the most to lose.

We’re seeing all our customers run early promotions, just like they did last year. And they’ve already started. But there are multiple factors involved. One is making sure they don’t miss out on sales when other retailers are offering deals, another is a technical strategy.

What happens when you compress sales into a single day of frenzied buying? Commerce sites’ response times can become slow under the load. Especially those sites still run on legacy tech. This results in a poor customer experience, lost sales, and massive pressure on IT teams. So promotions help spread out the load which enables retailers and brands to provide a better overall holiday shopping experience.

So no, I don’t expect that the margin spread this year will be significantly different from 2021.

It’s going to be difficult to generalize here. We just heard some pretty tough news from Target and some pretty good news from Macy’s. And it’s not just a sales conversation. Inventory management will often be the driver of both the sales and margin outcomes. An over-inventoried retailer sitting in an environment of tightening wallets is in a real pickle. And even if Target has taken all their lumps on clearing excess inventory, they are being pretty clear about discretionary spending. It’s softening.

It also looks like the big sale event didn’t provide incremental sales. It was announced and customers waited. Or they decided to buy early something they would have bought down the road. No incremental sales, but a margin giveaway. That’s the ugly lesson of one-day sales. Big, predictable sales are not the retailer’s friend.

It’s all about inventory positions and categories. Target has higher inventories, while Macy’s did not. Walmart saw improvements in grocery and not so much in general merchandise. Target’s business is more skewed toward apparel and discretionary categories with higher inventories. As the company activates more and deeper promotions than initially planned, others will have to respond to protect their sales going into the holidays. Buckle up; Target’s woes will not stop at its doors.

With most competitors taking a price positioning in stand, the market is going to mandate retailers play hard ball. Remember, merchandise is not like wine — it doesn’t get better with time.

The 2022 holiday season appears to be challenging for many retailers. While Target has historically done well during the holiday season, it is expected that their margins will be impacted by heavier than normal promotions to work down their excessive inventories.

This isn’t a Target problem, it’s a retail problem. And yes, I’d be happily surprised if there wasn’t brand-based margin compression.

I expect consumers would like a “normal” holiday season according to whatever their individual sense of that would be. So I also suspect it’s too early yet for retailers to panic and start too many promotional activities.

For Target, this is an operational efficiency issue. Target believes the scenario is affecting all of retail, but truly it’s affecting companies that have seen dramatic growth in the past few years. Target is driving 1.4% more traffic, 1.3% higher tickets, ~ $7B more in sales YOY from $80B in 2019 to $100B in 2022 YTD. The top line is amazing. The bottom line however, has seen increasing SG&A costs for the last three years. Shortage of inventory has bit into their business through Q2 and then suddenly shipping opens up and distribution centers are packed with all of Q4 inventory. For Target, the inventory scenario has been a roller coaster ride. The last piece is the belief that the holidays will be heavily promotional. Although yet to be seen, consumers are waiting for the discounting to start. Black Friday will be a great indicator of consumer sentiment, so I’ll be waiting to see if promotions drive consumer buying. Promotions, Discounting and markdowns are a recipe for lower profit if it doesn’t increase volume. Target… Read more »
2
|
0
-   Share

Repeat after me: “it’s pointless to over-analyze month-to-month sales fluctuations (particularly at the company level)”
And a side note — though it really shouldn’t be since it’s crucial to the meaning of the numbers, particularly now — are these nominal or “real” (price adjusted) figures?

Consumers know the deals are coming. In this economic climate, they are going to hold out for every penny-off they can get. This is going to squeeze all of retail. Target is just an early indicator of what is coming; not just for this holiday season but in Q1’23. Retailers will need to reassess their strategies in the new year and that’s when things will get interesting.

Almost every retailer’s profit margins have somewhat shrunk. However, in my opinion, the decrease in sales is not a severe issue and would only prevail for a short period of time. Customers will soon get back to their old shopping habits and the economy will also improve.

Braintrust
"Whether the last three weeks at Target constitute a trend or a bump in the road, it’s clear that most retailers will need to sacrifice gross margin this season."