What should Starbucks’s new CEO’s priorities be? 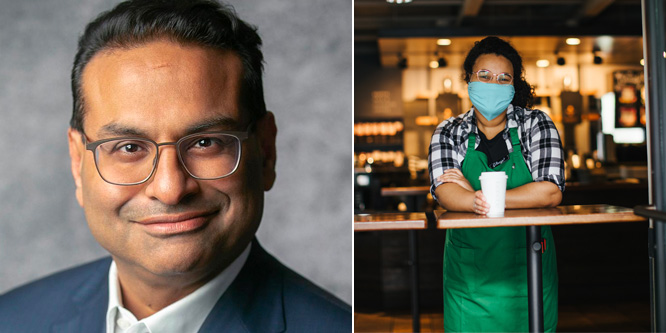 Starbucks announced plans to hire retail and restaurant industry outsider Laxman Narasimhan as its next CEO, replacing three-time CEO, Howard Schultz, as the chain embarks on a “Reinvention.”

Mr. Narasimhan, CEO of British CPG giant Reckitt Benckiser Group for the past three years, will join Starbucks in October and take over as CEO next April.

At Lysol and Durex owner Reckitt, Mr. Narasimhan earned praise for orchestrating a successful restructuring, quickly cutting costs, selling underwhelming brands and realigning the business for growth. Previously, he was global chief commercial officer at PepsiCo and had overseen its Latin America and Europe regions. He began his career as a McKinsey partner. Mr. Schultz told The New York Times’ DealBook, “He’s a true operator and has the DNA of an entrepreneur.”

Mr. Schultz, who returned as interim CEO earlier this year, will continue in that role and then remain “closely involved with the company’s Reinvention” as an advisor.

The Reinvention will be expanded upon at Starbucks’ Investor Day on Sept. 13, but it incorporates five key pillars:

A priority will be revamping Starbucks’ culture as more than 200 U.S. stores have voted to unionize since late last year and turnover has significantly increased. With drive-thru and mobile orders accounting for 70 percent of Starbucks’ sales nationwide, the company is investing in equipment and procedures to improve speed, not only to reduce wait times — a primary customer complaint — but stress on staff. Beyond labor, commodity inflation remains a challenge.

Wall Street was generally positive on the hire. While lacking restaurant expertise, Mr. Narasimhan’s experience at global consumer product companies is expected to translate well to Starbucks, along with his work improving Reckitt’s operations and business. Goldman Sachs’ Jarded Garber said in a note, “His experience at several consumer companies, broad geographical knowledge base and, importantly, a cultural fit with SBUX’s purpose-driven mission, per management, should set him up well to succeed.”

DISCUSSION QUESTIONS: What do you think of the outside hire of Laxman Narasimhan as Starbucks’s CEO? What do you see as the biggest challenges and opportunities ahead for Starbucks?

Please practice The RetailWire Golden Rule when submitting your comments.
Braintrust
"I like the hire. The biggest opportunity by far is in food and non-coffee based drinks. "

"It’s clear from the employees that there are some core internal struggles and that need to be the focus before any other."

"It’s good Mr. Narasimhan has consumer product experience because he’s going to have to leverage it big-time to revive the brand."

17 Comments on "What should Starbucks’s new CEO’s priorities be?"

I have no doubt that Mr. Schultz and team did their due diligence, but it’s impossible to tell if the new CEO will meet the expectations and deliver the desired outcomes. The corporate landscape is littered with ex-CEOs who make a lot of promises, present grand strategies, but then fail to deliver. Then they jump ship or get tossed, with golden parachutes. Pardon the cynicism but there’s a lot of evidence that this is so. Any new CEO should get the same starting point – let’s see what he/she can do. Starbucks is facing many challenges, and labor relations must be at the top of the list. Labor and culture go hand-in-hand, so this will be one area that will be especially interesting to watch as Mr. Narasimhan starts to display his leadership.

Mr. Narasimhan is a quality hire for Starbucks and it couldn’t have come at a better time. The stores are tired and the whole juxtaposition of mobile, drive-thru and in-store operations are in need of an entire reinvention. Furthermore smaller, more aggressive competitors have done an amazing job of creating unique consumer experiences that are on par with or better than Starbucks. It’s good Mr. Narasimhan has consumer product experience because he’s going to have to leverage it big-time to revive the brand. I’m betting he will.

Great points David! I also like the idea of bringing in a leader from the outside as Starbucks needs to reimagine their stores and their brand perception. Starbucks doesn’t dwell on it, but consumer behaviors have shifted as more people work from home and this is intuitively impacting coffee demand outside the home. Mr. Narasimhan and his team will need to redefine the store and product mix so that it appeals to the new customer environment.

You’re spot-on as always! The shift with WFH is creating a new dynamic that Starbucks has never experienced before and it will definitely need to be addressed in Mr. Narasimhan’s new strategy.

I like the hire. The biggest opportunity by far is in food and non-coffee based drinks. They are lackluster, and still despite that Starbucks isn’t doing bad. Imagine if they improve that product significantly.

Pepsi owns a lot of food-based businesses, people forget. It’s not all soda.

There is opportunity here.

Clearly, focus is needed. Number one on their reinvention list is “revamping execution of their brand mission,” and I think that need to be the clear focus. The Starbucks experience has not kept pace as the world has changed around them (70 percent of sales now via mobile/drive-thru!), and it’s time to get back to the things that made Starbucks so popular: a comfortable, inviting space with efficient and personalized service. How they adapt those ideals to mobile/drive-thru orders is not clear to me, but I wish Mr. Narasimhan well.

Starbucks has been wrestling with a tricky paradox; they are a massive multinational corporation that wants to create a brand based on a local, neighborhood-level engagement strategy. The most important tactic to deliver this local experience is to have engaged employees. Drive up and mobile have served Starbucks well; there’s not much interaction. Because of their size and investment in store infrastructure, they have successfully turned their stores into “drink factories” that are turning out beverages at volume. The cost seems to be employee engagement. When you also factor in a very tight labor market, the conditions for unions to take root have proven excellent. Building a better environment for employees has to be their top priority. To be pragmatic, they need to learn how to work with the union; it’s not going away, and the more they try to “combat” it, the more fuel for the organizers. In my opinion, right behind employee relations is managing their skyrocketing costs and supply chain. I believe they’re doing this, and doing it well. They have the… Read more »
5
|
0
-   Share

The first challenge Starbucks will face is to give Mr. Narasimhan time to make changes and see if they work as planned. Howard Schultz has a track record of stepping back in and the specter of that will be hanging over the new CEO.

The employees’ care and training must be job one. Their innovation store in Seattle must be a priority as they go from “passionate coffee roasters” to a cold drink factory. Now it isn’t about artisanal anything but cutting processes down so employees can do their jobs and not get burnt out in three months. Anything less is worthless.

Associates. Turnover there is daunting for a lot of reasons, but the main reason is that they’re so successful it has become an overwhelming proposition to work there. Big question: are their stores designed to handle the hordes of traffic they draw from an associate POV? Doesn’t seem like it as no matter how many people they have behind the counter, they’re all scrambling all the time. Maybe it’s self-serve, maybe it’s more room and more equipment and maybe even automation, but whatever the solution, taking the associate’s view as a priority right now should be goal #1.

Spot on! Moreso than any piece of equipment or store layout or batch of beans, the associate is the fundamental unit of production and if they don’t get that right, nothing else matters. The organization is too big to not have an employee union, so they need to embrace this development and nurture it as a partnership – it can be done well when management is committed (Southwest Airlines for most of its history, for instance) but Schultz’s adversarial blind spot needs to go for Starbucks to level up again.

Laxman Narasimhan’ appointment as the next Starbucks CEO is a very wise and strategic move. While Starbucks’s ambitions around its reinvention are ambitious, the company has achieved a size and scale that has exceeded expectations. With the scale they have achieved, the customer experience is disjointed in the stores, as the company’s operating model has shifted towards fulfilling mobile orders and driving efficiency.

The in-cafe experience is extremely fragmented, as many of the older format cafes are not suited for customers who may want to linger and work for a few hours. Additionally, Howard Schultz’s original strategy for Starbucks was to bring the Italian cafe experience to American customers. While the Starbucks showcase Roasteries may embody that spirit, most of the cafe fleets have a retro late 1990s look and feel.

I agree with the panel that the top priorities should be the people, especially those on the front lines, and revisiting their brand purpose to find meaning in it in today’s context.

I do think the new CEO could get his team to think about how data/analytics can come into play to smooth operations. And that can work in tandem with automating some more mundane tasks. Many orders are routine, and yet Starbucks acts like I’m a unique visitor each time. They could probably do more to manage the process by more accurately predicting daily drink orders, etc, or building out their loyalty program to gain more insights into these habits. This has the potential to aid the already-overworked staff who constantly appear to be on the verge of collapse.

The balance of customer needs and employees I think is key. Expansion to retail grocery shelve space is important, but Starbucks is still a coffee shop first, retail brand second. Some of the work of next gen retail experience that is easier for the barrister to operate I think is a great start.

I personally really think the ridiculous social media driven infinite combo of drinks needs to stop though. I mean, if someone really wants a ridiculous combo drink, it should be charged accordingly and taken off the timing queue so it doesn’t mess up everyone else’s order.

Mr. Narasimhan’s experience in beverage and consumer products is a valuable addition coupled with Shultz’s deep knowledge of coffee and the customer experience at retail. Best outcome is both are connected at the hip for a few years in order to sort out a myriad of opportunities.

A major consideration is whether Starbucks should reinvest in being a legitimate third place, which drove 30 years of major growth, or is being a highly efficient custom drink and food factory ultimately more important. Then, sort out supporting operational issues, labor, and get the right people in place.

People should always be the priority, and SBUX needs them more than ever to execute a complete revision of store experience to accommodate mobile ordering, pickup and delivery.

It’s clear from the employees that there are some core internal struggles and that need to be the focus before any other. An inside out approach is needed, as happy employees make happy customers.

Braintrust
"I like the hire. The biggest opportunity by far is in food and non-coffee based drinks. "

"It’s clear from the employees that there are some core internal struggles and that need to be the focus before any other."

"It’s good Mr. Narasimhan has consumer product experience because he’s going to have to leverage it big-time to revive the brand."