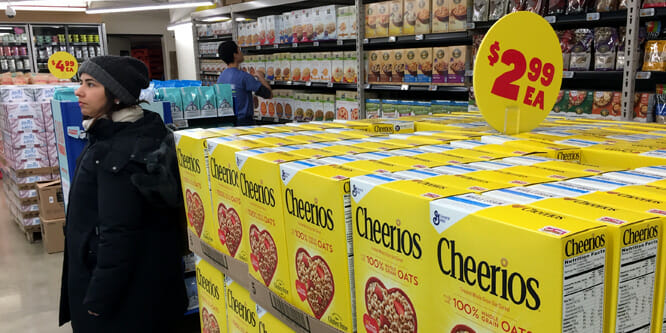 Amazon.com, if nothing else, is about change, and there has been plenty of that — with more surely to come — at Whole Foods since the organic grocery chain was acquired by the e-tailing giant. The latest is that Whole Foods is eliminating all store graphic artist positions as well many other jobs in the chain’s regional marketing organizations.

The news, which was first reported by Business Insider, is part of Whole Foods’ efforts to centralize its operations. The shift away from local decision making has been a source of consternation among many of the chain’s vendors, particularly smaller ones, who fear they may be cut out as Whole Foods makes decisions based on how much suppliers are willing to spend for shelf space, displays and promotions.

Whole Foods recently held a meeting with roughly 200 suppliers to clarify how the chain plans to run its business under Amazon’s ownership.

“The changes we’ve been making across the company directly address the feedback our supplier partners have shared over the years about the challenges of our decentralized purchasing structure and inconsistent practices across regions and stores,” said Robin Rehfield Kelly, a spokesperson for Whole Foods, in a statement.

While Whole Foods is cutting staff to align with its new centralized structure, a recent Wall Street Journal article reported that more than a dozen executives and senior managers working in areas including bakery, produce, local foods and sustainability have left the company as well. Some veterans of the company chose to leave even after being asked by senior management to stay.

While Whole Foods CEO and co-founder John Mackey has maintained that the culture at the chain has not changed under Amazon, there are others who see it differently.

“Culturally it’s been a rough start,” a former employee who worked in procurement for Whole Foods for nearly 10 years told the Journal.

DISCUSSION QUESTIONS: Do you expect the changes that Whole Foods is making under Amazon to eventually benefit the company or is management straying too far from its cultural and business operation roots? What do you see as the positives that Amazon has brought to Whole Foods? What are the negatives?

"I think that Whole Foods misses out on many new opportunities due to the current store-by-store buying mentality."

"To think that the original culture and processes would remain unchanged is naïve."

The changes being made were inevitable and will continue as Whole Foods evolves under Amazon. To think that the original culture and processes would remain unchanged is naïve. Naturally it’s in Amazon’s best interests to maintain as many of the elements that made Whole Foods a success in the first place, but it’s clearly a whole new ball game.

It’s very hard to tell in a retail operation what matters vs. what doesn’t. I can remember Sy Syms being adamant that handwriting the planned price drops on in-store merchandise was key to his success. The founder of Party City thought the world would end because we were printing a bar-code for purchases at the balloon counter rather than a handwritten number. Both were not particularly accurate. Party City thrives (and I suspect no longer hand-writes the balloon number) and Syms is a distant memory for other reasons.

It also took Trader Joe’s YEARS to put in proper POS checkout lanes. And the customers are glad they did.

Having said that, there is something about “local” that borders branding at Whole Foods. If Amazon makes it too vanilla, it will become just another grocery store and they might as well go ahead and buy Kroger too (a strange purchase, that would be, by the way). I think net/net, Amazon is definitely starting to stray too far from Whole Foods roots.

Deep cuts in local marketing can easily detach the retail store from the community of which it is a part. Support of local events and teams can give way to policies that close out community groups and initiatives, making the brand yet another faceless seller of stuff.

No one should be surprised by the operational changes taking place. Amazon is a terrific customer and logistics driven company. The key in any merger like this is to minimize any changes perceived as negative by the core customers at the acquired organization. If Amazon can achieve its desired efficiencies while making changes that are invisible to the customer, everyone should win.

FWIW, I don’t think their logistics are so terrific. They ship more air than any company I have ever seen. Hard to call that “terrific.”

I think the “voice of the customer” will win in the end here. If enough customers are vocal on social media and through other channels that reducing the number of locally-sourced items is affecting their loyalty to the brand, then I see Whole Foods finding a way to keep that vital element of their shopping experience in place.

Whole Foods provides a great venue to deliver healthy food and products to the consumer. This company’s purpose is not changing and the latest changes are making the internal management process more efficient. For a manufacturer dealing with Whole Foods, this is a positive change. Amazon is data-driven and they will make the right business decisions based on what the consumer is telling them.
Change is hard but, in the long run, it will make Whole Foods more efficient in delivering the right healthy goods to their consumer.

While it is sad to see anyone lose their job, this is a necessary step in curing the weaknesses at Whole Foods.

For too long there has been a cult-like halo around Whole Foods. Because of the company’s history and its ethical standpoints, many see it as a highly-engaged grocer, serving the needs of the community and shoppers.

In truth, Whole Foods is not nearly customer-centric enough. It tends to focus on things that its management and staff find important, not what shoppers find essential. It is operationally flabby. And despite the Instagram-friendly displays of produce, retail disciplines are nowhere near where they should be.

Someone needs to come in and shake the tree. And Amazon will do just that.

From the supply side of the equation, I’m hoping that Amazon will create a buying atmosphere more user-friendly to consumer brands so that Whole Foods will look at new items, and new innovations, on a chain-headquarters basis. I think that Whole Foods misses out on many new opportunities due to the current store-by-store buying mentality.

It’s too early to know for sure, but all the speculation is always interesting. Overall for Whole Foods, improved efficiency is a plus, the loss of local marketing is a minus.

In any acquisition like this, it’s to be expected that there will be shakeups. Whole Foods was not the greatest business when it was acquired by Amazon and we’ll continue to see Amazon trying to fix things and improve on processes, etc. in the future. In this case, it appears the positions eliminated have more to do with trying to establish consistent branding across the chain than anything else. Yes, some customers may view this as losing its “local” appeal, but the true measure of “local” in a grocery store has more to do with product than graphics branding and signage. The culture cannot remain as it was, and there will surely be a melding of the two cultures going forward.

This is a tricky one. One the one side, Amazon knows its business and always has a relentless eye for improving customer experience specifically through efficiency and pricing. So a more streamlined organization should help them accomplish that goal.

On the other side, part of what made Whole Foods great and unique was a genuine connection to the community that these local roles seemed to be integral in creating. Every Ralphs or Vons across the USA is pretty much the same but Whole Foods and Trader Joe’s have a seemingly authentic connection to their communities which certainly helped drive shoppers.

Whole Foods was better at having local products, local artists, local events and local connections to schools and non-profits then they were hiring local employees for more “standard” roles.

In the long run it will be quality and uniqueness of products, pricing, and store and staff hiring and training that will make largest impact, but moving away from local initiatives will come with negative side effects.

The move to centralize and standardize at Whole Foods is typical of the Amazon model that one size fits all. This will inevitably remove the local and specialist food retail USP upon which they have built this business. There are hundreds of food retailers that operate in a centralized manner who are significantly better placed to trade on price than Whole Foods — this is not their market. They have created a unique position by offering quality, specialty and local produce. If this is lost they will also become lost in the sea of the normal or average.

"I think that Whole Foods misses out on many new opportunities due to the current store-by-store buying mentality."

"To think that the original culture and processes would remain unchanged is naïve."