Will Apple find more room to grow inside of Target? 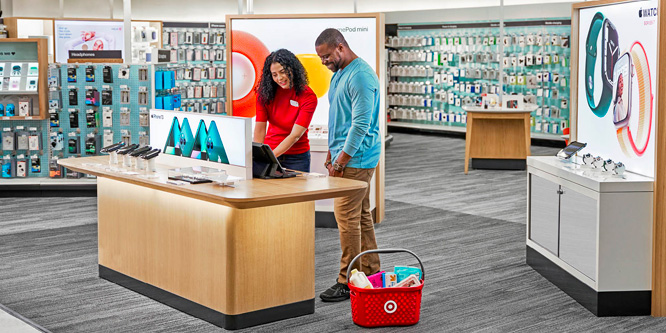 Target is expanding its partnership with Apple so that more people looking for Apple products at the general merchandise retailer can have an experience closer to what they would get at the Apple store.

The Apple at Target store-within-a-store concept is now operating in 150 Target store locations, according to a press release. The current count represents a threefold increase from the beginning of the year.

The concept dedicates twice as much selling space to Apple products than are usually found in Target stores. The shops are staffed by Apple-trained Target tech consultants.

Along with the expansion of the brick-and-mortar relationship, Target is giving Target Circle members four free months of trial access to Apple Fitness+ and will be offering deals on other Apple services, as well.

Jill Sando, executive vice president and chief merchandising officer at Target, called Apple at Target another reason for customers to “choose Target for all their shopping and tech service needs.”

Target has had a great deal of success with other store-within-a-store partnerships.

Its partnership with Starbucks, which began in 1999, is not only still in operation but has scaled to more than 1,300 of Target’s 1,900 locations, according to an article on TechCrunch. Target even began folding Starbucks orders into its curbside pickup service in February of 2022.

Target has also experimented with smaller-scale in-store shops. In 2016, when FitBits and other health monitors were still buzzworthy technology, Target piloted a “connected health” section in 510 of its stores. The shops were anchored by health technology from a vendor named Qardio, and were adjacent to store pharmacies.

This is also not the first time Apple has opened stores inside of other electronics retailers.

In the mid-2000s, Apple began opening shops inside of Best Buy locations, as an article from 2007 on the iPod Observer website discusses. The shops maintained the look and feel that the Apple Store had at the time, and were staffed by an Apple expert.

DISCUSSION QUESTIONS: Do you see the Apple at Target concept going chainwide at some point? What other store-within-a-store tech product collaborations might make sense for Target?

Please practice The RetailWire Golden Rule when submitting your comments.
Braintrust
"I expect this relationship will ultimately expand chain-wide and, given the importance tech plays in every day life, I expect to see more tech collaboration in the future."

"A terrific combination. Apple stores are always jammed. Giving Apple customers another shopping option is great for Apple but also for Target."

"I do see it going chainwide. Target, Starbucks, and Apple are lifestyles with cult-like followings — not just products. These are tentpoles."

15 Comments on "Will Apple find more room to grow inside of Target?"

The only question I have is, what’s taking so long? Expanding to 150 stores is good, but it’s a far cry from the 1,900 store footprint Target has. I do expect that this relationship will ultimately expand chain-wide and, given the importance tech plays in every day life, I expect to see more tech collaboration in the future.

Perhaps the rollout is slowed by the ability to train the appropriate employees thoroughly in the Apple model.

Fair point Gene. I would also add that it may have been Apple that wanted to go slower. Apple is very selective about their partnerships — not diluting their brand is in part why it’s such a powerful brand today.

There might even be more mundane reasons like supply bottlenecks for fixtures or availability of installation staff. Target is running a lot of store remodels and enhancements right now – Ulta Beauty, solar installations, charging stations, pickup logistics – and there are only so many qualified hands who can get the fit and finish right.

Apple has made it a point to differentiate its retail format from most, if not all, competitors. If Apple will run its own store-within-a-store with Target, success is attainable and the two companies will benefit. If the Target employees don’t think like Apple employees, the concept may be limited to only offering Apple essentials. Wait and see.

Talk about a match made in heaven, eh? I would like to have been a fly on the wall during these “negotiations.” Win-win-win to me.

I do see it going chainwide. Target, Starbucks, and Apple are lifestyles with cult-like followings — not just products. These are tentpoles. So the continuation of trends in fashion with brand collabs can continue to drive newness.

This has been a success for Target, so much so that they’ve already rolled out a mini version of this and it’s been a hit. Target has also had partnerships with Verizon, Google, and a few others and all have done well. They are been masterful at finding complementary brands to align with to create buzz, elevate Target’s brand, and drive business. Apple is a no-brainer. It’s upscale but, at the same time, very strong at mass. This will be a hit.

Given they’ve been trying this for over a year, it would have been nice to have seen some sales numbers for Target. Are they selling more Apple products? Is their profit higher than what they’ve replaced? This is where you make the decision, not whether you think you’re giving shoppers another reason to go to Target.

With such success, one would think there would be much more than 150 stores with Apple in Target. Seems like it should be in the range of 500-700 by now. So yes, there is tremendous room to grow this relationship. The downside however is not having qualified and skilled employees who know how to deliver and impart expertise on par with the Apple standard.

This idea has so many merits for both Apple and Target, I see really only one thing holding it back: the ability to staff the Apple shops with Target associates capable of delivering highly informed and empowered people that can at least get close to the experience you get from associates at Apple stores. As ever, brand is always at risk with collaborations like these. In this case, the Apple brand is the one carrying most of the risk. Hopefully, both companies have implemented lots of processes and guardrails to ensure great experiences. If so, I see nothing else holding this back.

This is a win/win/win for Apple, Target, and consumers. Apple gets space in the middle of heavy retail traffic. Consumers who shop at Target on a regular basis don’t have to go to a mall to get Apple products. Target gets their piece of the revenue, rent, etc. The store-within-a-store isn’t a new idea, but a move for Apple to go into a retailer’s space like Target is new. You would expect Apple to be in Best Buy, but Target broadens the reach.

The Apple and Target collaboration model are a win-win for both companies. This business model has matured and is doing quite successfully between Best Buy and Apple, with their shop-within-a-shop concept. As long as the Apple product and customer-centric are consistent and on brand, the model will be as successful in Target as it has been within Best Buy stores.

The success rate will be highly dependent on the training of the Target associates on Apple’s ways of doing business. The companies are taking a conservative start to their partnership with only 150 stores of the total Target store footprint. This transition could be accelerated if Apple leverages its highly trained associates in these new shops within a shop model. The potential seems limitless for both Target and Apple. It will be interesting to see how this plays out.

Of course, this collaboration will go chainwide. There are few downsides.

Target has the positioning elasticity to drive programs like this across wide swathes of demographics. They did it with Neiman Marcus and now Apple.

Braintrust
"I expect this relationship will ultimately expand chain-wide and, given the importance tech plays in every day life, I expect to see more tech collaboration in the future."

"A terrific combination. Apple stores are always jammed. Giving Apple customers another shopping option is great for Apple but also for Target."

"I do see it going chainwide. Target, Starbucks, and Apple are lifestyles with cult-like followings — not just products. These are tentpoles."