Will massive pay raises help Amazon attract and retain the best and brightest? 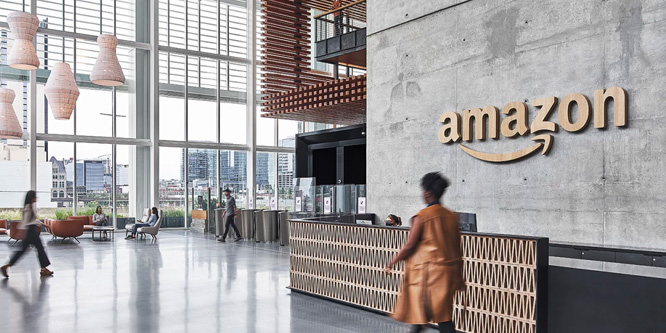 Amazon.com is looking to erase a competitive disadvantage it has vs. tech companies when it comes to recruiting and retaining corporate and tech employees. The retail and technology giant is more than doubling its maximum base pay to $350,000 from $160,000.

Amazon has historically offered lower base pay than its peers and made up the shortfall with restricted stock units and signing bonuses. GeekWire reports that Amazon on Monday informed staff of its intent to raise “overall compensation ranges for most jobs globally” and that stock units and bonuses would remain in place.

The pay raise decision was a response to market conditions that have seen workers leave companies, not just for better compensation but better working conditions and a healthier balance between their private and business lives.

Amazon is also changing its stock awards policy when it comes to promotions. Workers have traditionally had to wait until the next annual compensation review after being promoted. Under the new plan, they can receive the awards on a mid-year basis when warranted.

Amazon has not publicly quantified what base pay raises will mean to its balance sheet.

The new compensation plans follow recent reports from Bloomberg and Business Insider revealing that large numbers of employees were leaving Amazon due to its unrealistically demanding work environment and below market compensation levels.

Current reporting has not touched on what, if anything, Amazon plans to do about its corporate cultural issues.

Sarah Schnierer, a senior program manager at Amazon, recently resigned after being at the company five-and-a-half years.

Ms. Schnierer, who was part of an internal affinity group known as Momazonians, said she was disappointed by a lack of progress on issues important to Amazon’s female workers and their children. Many of these issues became more pronounced as the pandemic affected aspects of American life.

“I knew plenty of teams whose version of flexibility was acknowledging that emails wouldn’t be answered until midnight,” said Ms. Schnierer.

The challenges expressed by Ms. Schnierer are not restricted to Amazon.

“Businesses seeking to attract and retain top talent need to understand what employees have come to expect from their employers,” Karen Fichuk, CEO of Randstad North America, told Fortune. “In addition to higher wages, workers are demanding a safe working environment, increased flexibility, and new opportunities for growth. They’ll join companies who meet those demands.”

DISCUSSION QUESTIONS: How likely is it that Amazon’s higher base pay policy will significantly help the company recruit and retain skilled corporate and technical staff? How big a role do you think corporate culture issues play in decisions by workers at any company to leave for new employment opportunities?

Please practice The RetailWire Golden Rule when submitting your comments.
Braintrust
"No doubt this pay increase will help Amazon attract the best and brightest, but what the company does next will determine how long they will stay. "

"This is all about a race for the highly skilled technical workers."

23 Comments on "Will massive pay raises help Amazon attract and retain the best and brightest?"

Higher pay will help, but pay is only one part of it. Working conditions at Amazon’s corporate office are reputedly brutal. Ultimately, corporate culture, work-life-balance, and creating an environment where workers truly believe that they can make a difference will matter more than just pay.

Mark, this is all true, but a $160,000 raise speaks volumes to how well people will sleep at night.

True Gene, but this pay level would likely only impact the very top levels of the company. When you consider that Amazon has 75,000+ corporate employees, I suspect that the number of employees that will see a $160,000 increase will be relatively small.

I was in this game for a long time, as a CIO. We found that pay was the #2 reason people would come and stay. #1 was the ability to learn and enjoy their job, and have a career path. This was some time ago, but I know that I personally have walked away from big money because I had a crazy boss, and also because I didn’t enjoy just being a caretaker.

Yes, relatively small, 75,000 of 1.2 million. But the need for Amazon to have the best and brightest in those 75,000 positions to stay competitive is critical to the future of the company. Preventing the loss of these employees is critical versus any of remaining the 1.1 million.

Since Amazon had been making the most significant part of their profits from the AWS business, doubling the base pay of employees is not going to help their bottom line. If the raise in the base pay does not also come with quality-of-life improvements and less stressful company culture, the pay raises will only go so far.

Amazon has deep pockets and during times when higher pay is needed to attract talent this is extremely useful. However pay is only one part of the equation. Retaining talent requires working conditions, benefits, career advancement, job satisfaction and so forth to be right. Contrary to what is often reported, Amazon isn’t bad on all those things which is why it is able to secure the talent it has.

Yes, contrary to what is often reported, LinkedIn recognizes Amazon as the most desirable workplace in the U.S. for 2021 based on the company’s ability to attract, develop, and retain talent. LinkedIn ranked Amazon at No. 1 on its Top Companies 2021 list, which is designed to help professionals identify the best places to grow their careers.

No doubt this pay increase will help Amazon attract the best and brightest, but what the company does next will determine how long they will stay.

Amazon keeps taking steps to evolve toward Jeff Bezos’ vision as the best employer on Earth. Ballooning base pay will turn heads among top talent that had previously written off the retail giant. I expect a flood of brainiacs will polish their resumes.

At any company, culture can strengthen or ruin the employee experience. Flexibility, growth opportunities and appreciation keep workers loyal, and give companies a competitive edge during The Great Resignation.

Increasing pay will certainly help Amazon attract new workers, but I don’t think it will do much to keep them there once they settle in and realize that there might be more to life than money. Amazon’s issues are cultural and until they address those issues, keeping top tier employees who have employers eating out of their hand at the moment, a large number of their employees will continue to see options elsewhere.

The pay will definitely help, but the culture and conditions have to change. People will be OK with the higher pay, but not if they have to work 80 hours, seven days a week.

Pay is only one aspect to a job and, although it’s a very important component, study after study reveals that workplace culture, opportunity for advancement and, very recently, work location (hybrid/full remote) are incredibly important as well. The increase in base comp may retain Amazonians for the short term, but if these other cultural conditions don’t change, employees will continue to look elsewhere for gainful employment.

Only having underpaid employees for far too long leads to headlines for changing pay to what it should haven been all along. Perhaps the headline should be “Amazon finally paying employees market rates.”

Short answer: yes. I worked for a company that had to recruit top talent away from major metro areas to a mid-size farm town in Ohio. And they did very well at it. How? Made everyone an offer they couldn’t refuse. I heard many a time, “I can put up with just about anything for that much,” and of course, that’s usually true. Now, is it sustainable? That remains to be seen. But that isn’t even a conversation unless acquisition happens so, in my opinion, good strategy.

This is all about a race for the highly skilled technical workers. Last year the U.S. had the highest number of technical jobs openings in history. The problem is not going away anytime soon. You have huge companies going after a limited number of qualified individuals.

AS Tim Cook, Apple CEO, said a few years ago, Apple would not exist without China. In the U.S. I could fill a classroom with the kind of skilled technical workers we need. In China we could fill three football fields. Today China produces 15 times the number of STEM students as the U.S. About 71 percent of tech employees in the Valley are foreign born, around 50 percent in the San Francisco-Oakland-Hayward region, We clearly need more.

The massiveness of the base pay raise is relative to the starting point, which was ridiculously low in a highly competitive tech market. The combination of payouts (bonuses) and restricted stock units (RSU) completes the package; however instead of the three-year vesting of the RSUs, Amazon uses a four-year schedule. Overall, the RSUs reflect the bulk of the salary’s upside. This is effective as long as Amazon’s share price maintains its aggressive upward ride. But as we know, nothing goes up forever.

The first question is really two very different questions. Doubling the maximum base pay and leaving the stock options in place will make recruitment of top talent much, much easier. But, on its own, it is not enough to make a dent in the retention issue. There is only so much people can take, no matter what you pay them. It probably doesn’t help that Jeff Bezos, still the face of Amazon to many workers, just built a ship so large that a historic bridge that had stood through World Wars had to be dismantled to get it to sea. In the end everything comes down to culture, making it all the more puzzling that more companies don’t actively build the kind of culture where true talent can flourish.

High performers will come for the pay, but they’ll stay (or leave) based on the culture.

Higher base pay alone is not enough to retain skilled staff. Amazon needs to invest just as heavily into its cultural infrastructure and development. As counter-intuitive as it may sound to leadership, instilling more flexibility and autonomy into its teams will allow for even greater productivity and results.

Beyond a certain level, I don’t think “base pay” has much meaning (and as $160K is already well above that imagined line, multiples of that mean even less). It’s not, of course, that money is meaningless, it’s that base is only a small part of compensation for execs, and (monetary) compensation is only part of what they look for in a job.

Pandemic has changed all the ways and rules of employment. Employees have rearranged their priorities. Their family, health, wellness, and other relationships are now a more weighted consideration when choosing employment. So organizations, while recruiting would need to assure new employees that they care about employees’ financial, physical and mental wellbeing through perks and policies. Providing a hike would be a part of it. And speaking of retaining employees, organizations would need to focus more on their culture. Is the company emotionally sensitive and empathetic towards its people? Do the authorities address the issues of the women’s workforce? All these factors matter.

Unlike pay raises and perks, company culture is vital and yet an immeasurable KPI. As a result, it would be harder for employers to leverage culture for creating new job opportunities. They’d have to be mindful of cultural differences all the time and be active to resolve them.

Braintrust
"No doubt this pay increase will help Amazon attract the best and brightest, but what the company does next will determine how long they will stay. "

"This is all about a race for the highly skilled technical workers."