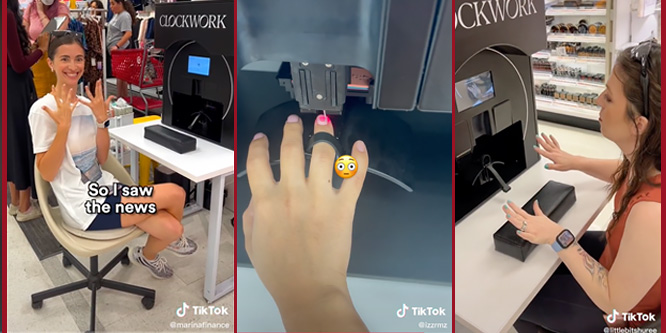 Shoppers at some Target locations can now get a 10-minute manicure from a robot. The service has been getting a boost in popularity, thanks to videos posted on TikTok.

Manicure robots created by a vendor called Clockwork are being piloted by Target in six of its stores nationwide, according to Yahoo Finance. Clockwork says that the robots are capable of cutting the time it takes to get a manicure at least in half, and further states that, beyond the Target pilot, it has tens of thousands of pending partnership requests both in the U.S. and worldwide.

TikTok users have been documenting their experiences at the test locations using the hashtag #robotmanicure, according to Allure. While the article points to drawbacks, such as a lack of a sense of being “pampered” that come with a normal manicure, as well as missing elements of the nail salon experience, such as filing, cuticle trimming, shaping and the possibility to get nail art, it touts the robot as a cheap, convenient solution for getting a manicure in a pinch. Customers can book appointments with the robot online. While the robot is fully automated, at present each one requires a live attendant to assure quality and address clogs.

A video of the process shared on YouTube shows a customer selecting options from a digital menu and then having her nails painted by a system resembling a 3-D printer.

While Target may be the highest profile partner of this robotic solution so far, Hy-Vee and DSW have both piloted old-fashioned non-robot manicure services in-store.

Hy-Vee last year announced a partnership with The W Nail Bar to open nail salons in a number of its locations by the end of 2021. In addition to manicures, the salons were to provide pedicures, nail art, waxing and tinting. At the time this article was written, the Yelp pages of all three of the Hy-Vee nail bars reported the locations as closed.

The W Nail Bar lists three of its locations operating inside DSW stores in Ohio.

DISCUSSION QUESTIONS: Do you see robotic manicures as being helpful in drawing customers to retail stores? What other types of robotic health and beauty technology might work in a retailer like Target?

Please practice The RetailWire Golden Rule when submitting your comments.
Braintrust
"Robotic health and AI-powered services are most definitely part of our future."

13 Comments on "Will robots nail in-store manicures at Target?"

I can’t talk about manicures. My closest experience would be a haircut. Wherever I have lived, I eventually found a favorite barber. In the last 30 years, I have had two. For me, the requirement is not only a good haircut but also good and sometimes personal dialogue.

Ladies, is a manicure the same for you?

Robonails? I can’t think of this without thinking of the Robocop malfunction scene. “Show me your nails. You have five seconds to comply…” Also, am I the only one to see that Clockwork is the robot vendor and instantly think A Clockwork Orange? This does have an appeal as “retail as theater,” though. Anything that’s a natural for TikTok videos has a head start in the marketing game. One thing is for sure, an MFC this is not.

Robotic health and AI-powered services are most definitely part of our future. Labor challenges coupled with rising costs make such investments in technology requirements. The novelty of this approach will have initial appeal. The proof of course is to see if this robotic manicure delivery system actually “nails it!”

This may help the manicure salons a lot more than it does anything for the customer. Wait and see…

I see lots of short-term benefits to Target as social media does its thing with Robonails. Long-term, I am not sure this has meaningful impact, as I don’t think people will choose to go to Target specifically because they can get their nails done quickly. I suspect people will choose to shop at Target if they have the products, prices and purchase options they want. Robonails are likely much further down the list of priorities for most shoppers.

I don’t know — this kind of reminds me of the Logan’s Run scene where Logan goes in to get a new face and the machine goes bananas. I would think that is a very personal thing but would love to hear from the women in our group.

Getting a manicure involves more than nail color, it’s also relaxing me time. Robot manicures are a fun and unique trend but I don’t see them taking over the role of nail technician.

I’m way out of my league commenting on this because I’ve never visited a nail salon, so the only thing I’ll say is that technology is a disrupter and can – at times – make the in-person, high-touch experience seem so much better! Will Robonails have a life? Sure, but I don’t think it will scale to any significant level. I do think that every in-person nail salon just got a huge wake up call that will force them to review their customer experience playbook.

While robotic manicures are a clever use of automation to speed services and reduce labor, they appear to be a novelty at this point. Similar to a massage chair, it is somewhat of an alternative to the real thing but definitely not a replacement. Personally, I think robotics are better suited for operational efficiencies than for customer facing experiences.

Manicures are about a lot more than color. The article glosses over filing, cuticle trimming, and shaping, but these are really pretty core to the manicure experience, no? That said, I like this for being fun and experimental. I’d definitely try it and clearly others will too. But it’s going to be a temporary PR burst like most in-store events are rather than a true added value experience.

As for other robotics in health and beauty stores, at a bare minimum I’d love to just be able to pick up my prescriptions by checking in on a screen at the pharmacy. I’ve seen these in the wild but they never seem to work…

Although I don’t think this will be a sustainable draw for customers, more a novelty, I do think it will help reinforce them as a destination for beauty and innovation.

No, in-store robots will not replace manicures at any store location for any extended period of time. As the article mentions, without an employee managing the robot (which only does a partial manicure, and not many of the functions which are key to a true manicure), this is really just a machine that is directed by an employee.

Braintrust
"Robotic health and AI-powered services are most definitely part of our future."