Will the EU’s anticompetitive investigation follow Amazon back to the U.S.? 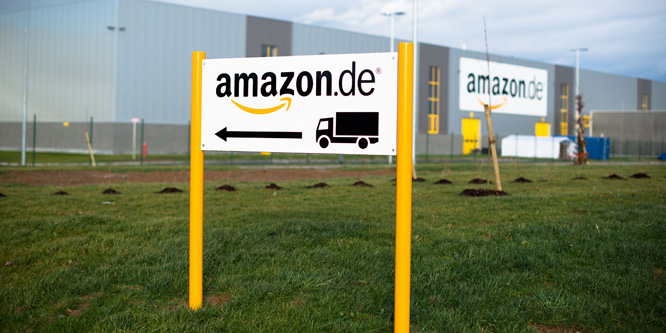 It’s long been alleged that Amazon.com uses data from third-party sellers on its marketplace to its own advantage. It has been claimed that Amazon discovers hot sellers, adds those items to its own inventory and then prices the products at points that its marketplace merchants can’t match. Now, the European Union is investigating the allegations and, if found to have merit, the repercussions could extend across the Atlantic for the e-tailing giant.

In response to a reporter’s question at a press conference on Wednesday, Margrethe Vestager, head of the EU’s Competition Commission, said that the agency had begun “preliminary” fact finding on Amazon’s use of data to see if it crossed an anticompetitive line.

Ms. Vestager described the investigation as “in the very early days” with the agency having sent out “quite a number of questionnaires to marketplace participants to understand this issue in full.”  She emphasized that no formal investigation had been launched into Amazon’s practices and whether they constituted anticompetitive activity.

“The question here is about the data. Because if you as Amazon get the data from smaller merchants that you host, which can be perfectly legitimate because you can improve your service to these smaller merchants,” said Ms. Vestager. “But do you also use this data to do your own calculations as to what is the new big thing? What is it that people want? What kind of offers do they like to receive? What makes them buy things?”

In 2014, Upstream Commerce conducted a study to determine if Amazon was using data from marketplace sellers to game the system. Upstream tracked 857 women’s clothing products initially sold by third-party sellers, but not Amazon. It found that within 12-weeks, Amazon had begun selling 25 percent of the top items first sold on its marketplace.

The EU’s investigation into Amazon’s use of third-party seller data comes at a time when the e-tail giant finds itself dealing with unwanted attention from political critics pursuing ideological and personal agendas.

Sen. Bernie Sanders has criticized Amazon for its employee compensation practices and “dangerous” work environments, charges disputed by the company.

President Trump, unhappy over Washington Post coverage of himself and his administration, has made unsupported claims about Amazon not paying state sales taxes and receiving special U.S. Postal Service deals. Amazon CEO Jeff Bezos owns the paper, which is not affiliated with the e-tailer.

DISCUSSION QUESTIONS: Should Amazon be worried about the EU investigation into its use of marketplace seller data? Do you see a similar investigation taking place in the U.S.?

Please practice The RetailWire Golden Rule when submitting your comments.
Braintrust
"Although they are pretty much the most trusted brand in the world, they are centered squarely on profit. Convenience and trust are their gateway drugs, and society is addicted"

"Wait, are we saying that the third-party sellers (anywhere) don’t know that Amazon will use their info right from the get-go? That’d be pretty naive."

13 Comments on "Will the EU’s anticompetitive investigation follow Amazon back to the U.S.?"

I have very little respect for EU authorities. They are highly aggressive with U.S. technology companies, their positions are often illogical and they have no clue of how markets actually work.

Whether Amazon can use data from its marketplace is a matter of the contract between Amazon and third-party sellers. It’s a private agreement and should have nothing to do with government.

Wait, are we saying that the third-party sellers (anywhere) don’t know that Amazon will use their info right from the get-go? That’d be pretty naive. Besides, in the U.S., we love big business. Despite causing a huge recession and woe to millions, no one from any bank or investment firm ever spent a day in jail. I would expect Amazon to get the same treatment (unless someone has it out for the boss).

Amazon is more than a retailer. It is more than one of the most efficient consumer ecosystems. It is an ecosystem with unprecedented capability to market to one customer at a time. To make it all work requires unprecedented infrastructure and levels of data. Marketplace seller data improves speed and effectiveness of the overall ecosystem. It can also be harvested by Amazon to rapidly exploit areas of opportunity. Yes, I’m quite sure that Amazon will be investigated multiple times. The question is how do you “firewall” the marketplace seller data when it is the oil that makes the entire ecosystem work for distribution? When you sleep with the “devil” data is the new gold that makes everything transparent.

If anyone is familiar with the tycoons of the 19th century, then look at Jeff Bezos the same way one would view Cornelius Vanderbilt. Mr. Bezos is ruthless, smart and will do anything to succeed. That said, I’m not sure here if Amazon has broken any rules because it sounds like competition and just like Vanderbilt, the greater the competition, the more competitive he will be. We have seen Amazon penetrate a variety of industries all with fantastic success and this will continue. So if Amazon is getting data that is giving the company selling advantages, unless what they are doing is proven to be illegal, the worst that will happen will be other retailers will attempt the same strategy. Then Amazon will find another way to compete.

I’m with Chris. As time goes by, I get increasingly uncomfortable with the power of all that is Amazon. They don’t need to make money on margin, their cash cows are so much more powerful—holding the largest keys re: reaching customers on the hunt to buy, knowing the intimate details of our purchases and, when tied to the many other data streams, our paths and habits, getting in on our homes, etc. They are coming after health soon too. Of COURSE they are using third-party data to their own advantage. Why wouldn’t they? They are a business, and although they are pretty much the most trusted brand in the world, they are centered squarely on profit. Convenience and trust are their gateway drugs, and society is addicted. Due to this, they are quickly surpassing even government’s understanding of their inner workings–or their ability to control them. And now we have 3,000 Amazon Go stores coming. Again, I fear the potential implications—and how they can (and will) affect small business AND retail. There’s a book called… Read more »
6
|
-4
-   Share

Maybe I’m too cynical, but, my reaction is: Of course Amazon is using third-party data for their own personal gain. Whether or not that is illegal, I have no idea. Honestly, I’m not too sure it would make much difference. I’m not saying it shouldn’t — it should, But in the court of public opinion, Amazon is doing great in the U.S.

Amazon can be a good source of revenue and exposure for independent sellers, but my personal opinion is that retailers on Amazon should diversify their revenue streams and use Amazon as a launch point or as an additional sales channel rather than their end game. Amazon is in it for Amazon, and third-party sellers need to keep that in mind.

This brings to mind the Cherokee legend about the little boy who picked up a rattle snake and then asked why the snake bit him. The snake replied, “You knew what I was when you picked me up.”

After all the discussion and publicity about this issue any third-party seller on Amazon should know in advance that Amazon is likely to use the information they gather for their own benefit. As Neil stated I believe this is likely spelled out in the agreement with Amazon. Even knowing this could or will happen, third-party sellers elect to move forward because they believe the benefit outweighs the risk.

The philosophies about competition are very different in the EU and the U.S. In the EU, the philosophy of government is to protect the weak from the strong. Their anti-trust laws are much stronger than in the U.S. It matters not if they are consumers or small companies. True competition is a hallmark of EU enforcement.

Sadly, the U.S. philosophy is almost the opposite. This may stick in the EU, but I can’t imagine it sticking in the U.S.

Something has got to give eventually with Amazon. There seems to be literally no business at this point that they don’t want to get their tentacles into. (Christmas trees, anyone?) I like the service and convenience of Amazon, but I think it is coming at a great cost to competition. With Trump, Bernie Sanders, and the EU against them (for different reasons), they may be facing some stronger headwinds.

Why has something got to give? Amazon is big because people use them. If people stop using them, their power fades. These same arguments were once used of Walmart. And of Microsoft (which the EU vigorously hounded at one point). Both companies are now on the back-foot and are working like crazy to compete.

Besides, Amazon bears none of the hallmarks of a monopoly or near monopoly company. It’s profits are slim, it is highly innovative and nimble, and there is ample competition in across all of the categories it sells.

As a brand I would view Amazon as providing access to the consumer I would not be able to replicate. Now, what’s my exposure? What are the trade offs? What’s my short and long term plan that takes all this into consideration? As a consumer I view Amazon as expanding my options, not limiting them. I still have abundant choices. And I am now a better informed consumer than I would have been otherwise. Choices with pros and cons — for everybody.

Part of the Amazon flywheel and business model is sellers, selection, low prices and customer experience. Sellers help provide the vast selection which provides data to Amazon allowing Amazon to add even more selection and competition which drives down pricing. All of which enhances the customer experience and creates loyalty bringing more traffic to the site. This flywheel is what has made them the behemoth they are today.

As Amazon continues to grow and reach into more and more industries, it will continue to attract the attention of governments and come under more and more scrutiny. Amazon is aware of that and I see them increasing their PR around how they help small businesses, like the recent addition of Amazon Storefronts highlighting small businesses, and press releases touting SMB sales metrics.

This will be a dilemma for the current administration: do they investigate Amazon, who they seem to hate, or do they snub Europe — whom they also seem to hate — by pointedly ignoring the issue? Decisions, decisions … perhaps (fingers crossed) the issue will be decided on its own merits of EU vs US law which, at the moment IMHO, probably favor Amazon.

Braintrust
"Although they are pretty much the most trusted brand in the world, they are centered squarely on profit. Convenience and trust are their gateway drugs, and society is addicted"

"Wait, are we saying that the third-party sellers (anywhere) don’t know that Amazon will use their info right from the get-go? That’d be pretty naive."