Will the soy-in-chicken report sink Subway? 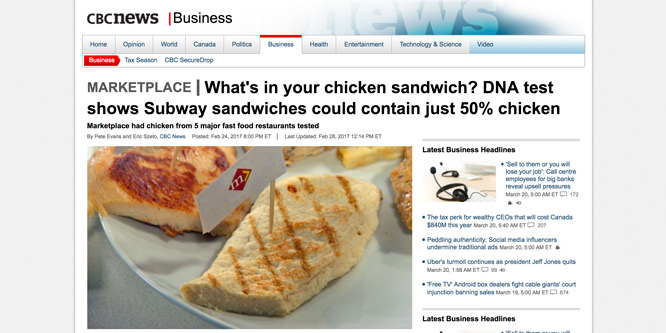 A Canadian Broadcast Corporation (CBC) program’s report showing the chicken used in Subway’s sandwiches contained large concentrations of soy filler has prompted the chain to start a public relations battle and take the broadcaster to court.

Subway has filed a suit asking for $210 million in damages over claims made during a recent broadcast of the CBC’s Marketplace program. Subway claims the program’s allegation that its meat “had only about half chicken DNA” is “defamatory and absolutely false.”

The producers of Marketplace claim that they were so taken aback by their original testing of Subway’s meat that they ran a second test to be sure a mistake had not been made. In the end, the producers concluded that only 53.6 percent of Subway’s oven roasted chicken came from chickens.

Emma Bédard, public affairs manager for CBC, told The Toronto Star, “We believe our journalism to be sound and there is no evidence that we’ve seen that would lead us to change our position.”

Ms. Bédard also accused Subway of using hyperbole in its suit and falsely alleging claims were made by the program that did not happen.

For its part, Subway said it had two independent labs test its chicken. Those tests showed the chicken the chain uses in Canada only had “trace amounts of soy,” which runs contrary to Marketplace’s reporting.

Ms. Bedard said the CBC contacted Subway last month, but the chain’s response was simply that the report’s findings were “false.”

Subway’s position is that the company sought “to share the facts with the CBC” over the inaccurate claims made on Marketplace, but that CBC failed to retract the report. “Serving high-quality food to our customers is our top priority, and we are committed to seeing that this factually incorrect report is corrected.”

DISCUSSION QUESTIONS: From a public relations standpoint, has Subway made the right or wrong move in pursuing damages against the Canadian Broadcasting Corporation? Will the apparent admission by Subway that its chicken contains some soy filler, regardless of the amount, hurt the chain in the current age of ingredient awareness?

Please practice The RetailWire Golden Rule when submitting your comments.
Braintrust
"Subway’s aggressive stance is understandable given the allegation, however now it needs to answer the question, where’s the beef -- I mean -- chicken?"

"When integrity is deliberately compromised in even the most minor of ways there is eventually a major price to pay."

"They were able to distance themselves from Jarrod. I’m sure this will not sink Subway — even if true."

14 Comments on "Will the soy-in-chicken report sink Subway?"

Subway’s aggressive stance is understandable given the allegation, however now it needs to answer the question, where’s the beef — I mean — chicken? If their chicken sandwiches do indeed contain a high percentage of soy as the CBC report suggests then Subway could very well take a hit as once-trusting consumers look elsewhere for meal choices. On the other hand, if Subway can back up its claim then I believe that they will easily weather the chicken controversy.

The Subway brand is healthy and fresh. Any doubt cast on those attributes is an attack on the brand. Either the CBC or Subway is right. The courts will determine the outcome. If the CBC is right, Subway is in for a world of hurt.

If they don’t think it’s true, Subway should sue.

The consumer watch segment tried hard to provide a consumer taste, nutritional and DNA-analyzed composition assessment in the reporting. See it here. Subway fared shockingly poorly, but none of the results for any of the brands inspired consumer confidence, so I’d have enjoyed being a fly on the wall as Subway, their purchasing co-op and their chicken provider considered an action plan. There is a price to pay when the reality does not sync with the advertising and this food quality analysis is a body blow to QSR. Will it be forgotten? Yes, as quickly as red slime in beef and contaminated spinach. Subway should fight the battles it can win and communicate the positive.

This could be a major problem if the report is true. Subway has a ton of franchisees who are wondering what the truth is. For the price they get for subs, I hope for their sake that these allegations are false, as it could hurt sales and mean a loss of credibility. Chick-fil-A and others could benefit from this depending on the outcome. The public has little patience for these type of incidents. Hopefully it will be over quick.

CBC’s Marketplace has had a long and, for the most part, admirable history of accurate reporting. For goodness’ sake, why would there be ANY filler involved? Putting in a small amount of filler is dumber than a large amount since the risk/benefit ratio is even more pathetic.

I remember a confrontation with a veterinarian who was hocking a very popular brand of dog food where the first ingredient was corn. When I challenged that stated fact, his explanation was “But the corn is ground extremely fine.” So how does the make it “not corn?” was my response.

When integrity is deliberately compromised in even the most minor of ways there is eventually a major price to pay. Subway has already admitted the sin.

I assume that a law suit, if it materializes, will happen in a Canadian court. That will prove to be quite a different process than the American process.

If Subway does not address this accusation it will not go away any time soon. Once the first news cycle moves on the litany of lawsuits from those who actually bought Subway’s chicken sandwiches (and those who did not) will be part of the next cycle. Once that dies down it will be the stories about some group seeking a class action. Subway has no choice but to take steps to disprove this claim.

Food-related incidents such as these historically generate a strong reaction from consumers. Look at Chipotle for a recent example. Consumers care deeply these days about the quality of ingredients in their food, especially it seems in the QSR and fast-casual space. Subway and CBC can’t both be right. If CBC is right, Subway will have a tough time keeping their customers. If CBC is wrong, Subway should go after them to set things right.

They were able to distance themselves from Jared. I’m sure this will not sink Subway — even if true.

Funnily enough, Subway’s saving grace here (if the CBC report is accurate) could be the fact that the chain isn’t (I don’t think) considered all that healthy anymore by consumers, certainly not like in their heyday in the ’90s when it was one of the only fast-food outlets where you could hope to see something resembling a vegetable. I think the low-carb trend did a lot to separate the idea of health from the idea of eating an entire loaf of bread for lunch, and competition from fast-casual chains hasn’t helped Subway either. And I don’t even know if the chain is positioning itself as healthy anymore. I remember a year or two ago seeing that Subway was promoting a sandwich with Fritos on it and figured that was a quiet admission that the company was no longer targeting the health-conscious audience. So I think this could blow over more quickly than a Whole Foods scandal or a Chipotle scandal because customers think of Subway as being on the lower fast-food rungs these days. News… Read more »
1
|
0
-   Share

Sink them? Absolutely not. If the whole “yoga mats in the bread” thing didn’t sink them, I doubt a little soy in their chicken will.

The worst outcome here is for this question to linger. Subway should address this immediately, or wind up as a punchline on late night TV.

Hard to give an opinion without knowing the truth … other than the obvious point that most people will think “chicken” should contain 100% chicken and the fact that (even) Subway implies something else when it says “only trace amounts of soy” won’t satisfy a lot of people.

Subway weathered the Jared crisis well, I think — as it should have since they were really an innocent third party — but this may prove harder to overcome.

One of the biggest emotional motivators that drives consumer behavior is the desire to provide for one’s family, and in this case, the need to provide healthy and wholesome food. Subway must respond to CBC’s accusation to avoid compromising their traditionally strong and positive response to that emotional motivator, and their perception as a healthy alternative to fast food. Subway’s lawsuit against CBC may be appropriate if CBC’s data can be proven misleading, but the sandwich chain has to make a public response as well to preserve its reputation. A lawsuit, whether you are right or wrong, always carries something of a negative spin, and this lawsuit puts Subway on the defensive — a place in which no company wants to be. The lawsuit must be accompanied with a more positive spin in the form of a new ad campaign and a very strong PR push.

Braintrust
"Subway’s aggressive stance is understandable given the allegation, however now it needs to answer the question, where’s the beef -- I mean -- chicken?"

"When integrity is deliberately compromised in even the most minor of ways there is eventually a major price to pay."

"They were able to distance themselves from Jarrod. I’m sure this will not sink Subway — even if true."