Will U.S. livestreaming soon take off like it did in China? 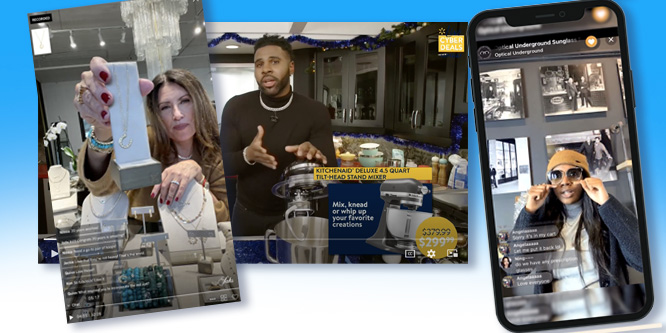 Two-thirds of Chinese consumers bought products via livestream in the past year, according to an AlixPartners survey from October 2020. Will Americans ever catch up?

In the U.S., shoppable livestreaming gained significant traction as in-person shopping was necessarily restricted due to the pandemic, and some see another leap forward this year.

A recent Adweek article, however, predicts an inflection point for live commerce will likely not arrive for a couple years following more experimentation across Instagram Live, Amazon Live and TikTok as well as numerous niche platforms.

Gartner analyst Ant Duffin told Adweek, “What you’re starting to see more and more now, especially in the livestreaming space, is a proliferation of different executions of livestreaming.”

A BeautyMatter article said livestreaming has to become more seamlessly integrated into social media and e-commerce platforms, like China, to gain greater adoption. The article states, “In Western markets, the experience to date has been more transactional than social.”

Andrew Lipsman of eMarketer recently told Morning Brew that he doesn’t expect U.S livestreaming to ever reach China’s level. “People have compared livestream shopping to QVC, but QVC works because it’s on TV,” he said. “With livestream, people have to lean in and really want to engage with it. So the question is, how many people really want to spend a significant amount of time watching these?”

DISCUSSION QUESTIONS: Will livestream shopping in the U.S. see a spike in adoption and availability in 2022? What’s holding back adoption similar to what has happened in China?

Please practice The RetailWire Golden Rule when submitting your comments.
Braintrust
"It's time to define what social commerce looks like in the U.S., rather than just replicate what was successful elsewhere."

"I do predict an uptick in U.S. livestreaming, but not to the extent that we see in China. Culture is a big part of this."

"I don’t know many people who have disposable income waiting for anyone’s livestream."

14 Comments on "Will U.S. livestreaming soon take off like it did in China?"

I agree with Andrew. I don’t know many people who have disposable income waiting for anyone’s livestream.

There is definitely a segment that will gravitate towards livestream shopping. Add it to to the long list of options that customers have to shop.

There are some fundamental differences between China and the U.S. that will prevent livestreaming from reaching the same scale in the U.S. In particular, Alibaba and Tmall facilitate most of the notable livestreams, and the U.S. market is far more complex than that. A single retailer livestreaming a single or handful of brands will not have the same pull. It’s time to define what social commerce looks like in the U.S., rather than just replicate what was successful elsewhere.

I do predict an uptick in U.S. livestreaming, but not to the extent that we see in China. Culture is a big part of this. Having traveled to mainland China many times, my interpretation of consumers’ attitudes toward retail is that they treat it more like a sport than traditionally a secondary activity like in the U.S. Furthermore, over the last three decades, China’s urban population centers have continued to grow at massive rates, where cities now account for 64 percent of the nearly 1.4 billion people. As you might imagine, high density centers with access to speedy broadband coupled with high single/low double digit GDP growth are contributing factors to livestreaming attendance. All this said, livestreaming can play a huge role in how U.S. retailers differentiate their offerings from one another. And that is very exciting.

If livestreaming doesn’t take off in the next year, it probably won’t ever take off in the U.S. Brands need to find ways of being more engaging, educational, and accessible in their approach in order for this to work. In China, livestreaming is happening where consumers already are. In the U.S., consumers have to actively seek it out and know when to tune in. It needs to be more of a constant and more aligned to what shoppers need in the moment.

“The time and effort that consumers have to invest in watching livestream shopping are the biggest obstacles.” Well said David Naumann.

Yes, more U.S. companies and consumers will flock to livestreaming in 2022, as e-commerce gets entertaining.

Livestreaming is growing in influence across categories and industries like:

In China, livestream events have become the new “must-see TV” equivalent. Best practices include seamless integration of e-commerce, payment and social sharing functionality. Captivating content features sales-oriented influencers who are emerging as new celebrities. It will take time — and a concerted, industry-wide collaborative effort — for the U.S. to catch up.

Glancing over my teen daughter’s shoulder, she’s consuming media very differently and nearly all of it is from streamers none of us have ever heard of. (Lots of anime and gaming – in this respect already highly aligned with Zoomer media, clothing, and merchandise inclinations in East Asia.) I don’t see the big, traditional retail brands as the vanguard – it’s going to be little independents, working off a print-to-order backbone, that become the ones who figure out how to make it sustainable in the U.S. market.

It appears that I may be more bullish on livestreaming than most other BrainTrust members. I have spent a good bit of time researching and documenting my passion for associate livestreaming (versus influencer livestreams), but even I don’t think it will ever reach 10 percent to 20 percent of total e-commerce sales. The built-in adoption of e-commerce in China far outweighs the U.S. market. However if it could reach even 5 percent of e-commerce, that is still very meaningful and worth exploring.

You nailed it Dave with associate-led livestreaming. I firmly believe this will happen more and more — and rapidly, especially with smaller retailers who will realize this is a fantastic way to reach younger audiences that don’t expect them to have high-end production values. Will it be 10 to 20%? Maybe not, but either way, it will be significant enough dollars that it’s worth taking notice of this.

Of course, I guess that all depends on how you define, “a spike.” If by spike you mean moderate growth off a small base which statistically looks at first blush to be a staggering uptick — maybe. If you think of “spike” as a real, sustainable rise in interest and use, the answer is, “no, not in 2022.” That said, let me say that I disagree slightly with some of my distinguished fellow BrainTrusters. Many of our discussions seem to wrestle with variations of the same question, “Does individual and collective human behavior evolve in response to the adoption of new tools?” And the answer is that there is a pretty well documented and unbroken history of exactly that since the dawn of modern humanoids. The effectiveness of printed words is (directionally) on the downturn and a consumer preference for visuals, symbols, and spoken words is (directionally) trending up. Livestreaming seems to be on the right side of the arc of communication, so it will grow in popularity – just not quite as fast and… Read more »
1
|
0
-   Share

While there will be an increased level of engagement with livestreaming content, the U.S. market will not approach the omnipresent force in the China market. Livestreaming will continue to be a viable option for brand engagement and social selling.

Yes, livestreaming, social commerce, it will all grow significantly. Will it be as big a percentage of total sales as in China? Probably not, but will still be significant. Brands like Estee Lauder used live streaming successfully to increase digital summer sales by as much as 50% so the evidence is there outside of China. We may see a bifurcation in terms of platforms used and retailers using them. One option is to rely on the big social platforms to deliver livestreaming capability, likely favored by smaller retailers if perceived as a faster, easier router to getting up and running. But there are also numerous startups in this space delivering dedicated platforms for livestreaming that link to the social platforms but are not dependent on them. The lack of familiarity and platform choice is one reason for slow adoption, but this will be overcome as more brands try out the technology and see results. One area I like to distinguish, as Dave Bruno has done in his comments, is associate led livestreaming vs influencer led.… Read more »
0
|
0
-   Share

Braintrust
"It's time to define what social commerce looks like in the U.S., rather than just replicate what was successful elsewhere."

"I do predict an uptick in U.S. livestreaming, but not to the extent that we see in China. Culture is a big part of this."

"I don’t know many people who have disposable income waiting for anyone’s livestream."