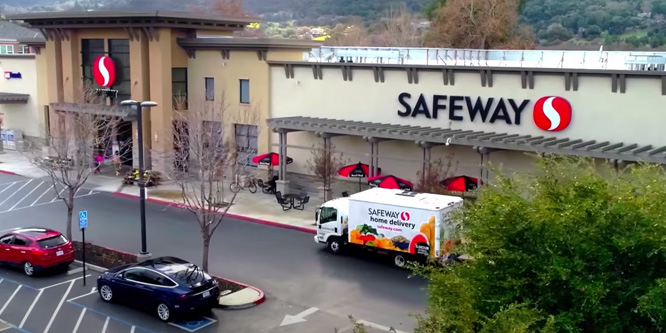 Albertsons Cos. has announced that some of its stores in California will stop using its own employees to deliver online grocery orders beginning on Feb. 27 and move to independent contractors instead.

The grocery giant, which has used a mix of in-house and third-party drivers in the state in recent years, is making the move in response to the recent passage of Proposition 22. The law exempts third-party providers from having to treat workers like employees rather than contractors, regardless of how much of their incomes are dependent on that work. Opponents of the proposition, prior to its passage, argued that it would allow companies to cut in-house workers to opt for lower paid third-party providers.

The retailer has not said how many workers will be affected by the decision or if those being shifted to other positions will receive pay and hours commensurate with what they are currently making. It’s not clear if Albertsons is looking to make a wholesale move to third-party drivers across its entire network of chain stores.

An article by Knock.LA painted a picture of Albertsons as engaging in corporate hypocrisy. It pointed to the chain’s pronouncements of its workers as essential and heroic in the early days of the pandemic while making the decision to jettison them as soon as it became financially expedient for the company.

Albertsons and its divisions, like other grocers, have enjoyed booming sales during the pandemic as consumers spend a greater percentage of their disposable income eating at home. The grocer reported same-store sales growth of 13.8 percent during its second quarter. Online sales jumped 243 percent during the period. Albertsons’ solid second quarter performance followed even bigger gains during the first quarter when its comps were up 26.5 percent driven by a 276 percent jump online. The grocer is scheduled to release its third quarter earnings next week.

DISCUSSION QUESTIONS: What do you make of Albertsons decision to no longer use its own employees to deliver online orders? Do you expect all grocers to eventually transition to third-party delivery services rather than perform many of those functions in-house?

Please practice The RetailWire Golden Rule when submitting your comments.
Braintrust
"While there are inevitably some savings, there are risks too in that service standards are harder to maintain and enforce."

"It is debatable whether third-party delivery is cheaper than in-house delivery per order ... What is not debatable is the wide range of extras offered by third-party services."

"The open question is around how well these independent contractors do representing the Albertsons brand to customers."

I suspect it all comes down to cost. While same-store sales are up, I suspect that profit was squeezed by higher costs. The temptation to use lower cost delivery services instead of their own employees is not necessarily hypocrisy if the former delivery employees are re-deployed to other roles. No doubt every grocer (or retailer for that matter) is looking for ways to minimize delivery expense and transitioning to a third-party provider may be the right answer.

Online grocery delivery is expensive and margin eroding, especially as consumers do not bear the full cost of the service. As such, it is not surprising that Albertsons is looking to reduce costs by switching from contracted employees to informal contractors – something that Proposition 22 has facilitated. While there are inevitably some savings, there are risks too in that service standards are harder to maintain and enforce. There is also a reputational risk as some will see this as reducing working conditions and benefits.

Comps are up but so are delivery expenses. This has been and will continue to be a financial challenge for all food retailers, regardless of how the “final mile” is negotiated. The negative PR impact aside, food retailers need to either reduce delivery costs or shift the burden to customers in the form of higher food prices.

This is a cost-cutting move, nothing more. Retailers have always looked at the labor cost line as the best way to improve margins – pandemic or no, that’s not going to stop. The problem is that the shopper’s only personal brand experience now will be through non-employees, which is putting a lot on the line to save a few bucks.

I agree – I have wondered what the ultimate impact will be on the retailer’s brand loyalty if they outsource a major customer touchpoint. I get that the costs are still not optimized – the last mile is expensive and hard which is why grocers had never really cracked that nut before. Outsourcing it doesn’t make it any less expensive or hard. But it does put an intermediary between the customer and the retailer, which ultimately may cost a retailer much more in lifetime value.

I agree. The impact on brand experience may be even more significant during a peak period. If the number of peak orders is such that some have to be prioritized over others, a third-party provider may focus on the most profitable orders for them (e.g. orders delivered to customers living close to each other) — which may not necessarily be the best customers from Albertsons’ point of view. The risk is that a key element in the customer experience may be sub-optimal for some of the best customers.

The fact that the change is limited to CA stores speaks volumes. But it does also suggest that stores in other states could be soon to follow if their labor laws are, or soon change to be, similar to California’s.

It actually isn’t limited to Southern California. This move is also happening in Texas.

I am not sure if it is happening in Northern California….

The Business Insider article sourced today also made mention of a change at some Tom Thumb locations in Texas.

This is a classic build vs. buy/core vs. context/need to control customer experience discussion. Last-mile delivery is not a core competency for Albertsons, and the retailer will lose a lot of money and mindshare building it. It appears for now they are going through an outsource model. But customer complaints and costs will bring the discussion back to the virtues of managing it in-house.

It’s all about cost, and the hassle of acquiring and keeping employees for non-core competencies. Nothing really unexpected. I suspect others will follow in California and other places if/when it becomes advantageous. Hypocrisy? More like standard operating procedure in our industry today. Nobody really expects loyalty from larger retailers anymore, do they?

It is not surprising that Albertsons is making this move as the law allows third parties to get away with significantly lower pay for drivers and the overall cost to the company is much lower. Whether it’s right for third parties to be allowed to pay their staff lower wages is more a matter of conscience than business, but the fact that they can makes it inevitable retailers will use them. Grocery margins are always tight and with the competitive nature of food retail you need to protect what you can. However, when will someone realize that having really good staff who represent your brand and deliver an exceptional level of service can be a competitive advantage? All it takes is one bad experience with a third-party driver and you can lose a customer and not even know why. If you train and look after your own staff correctly they can be ambassadors for your brand and business, help you keep customers and probably increase them by word of mouth praise for your service. It… Read more »
4
|
-1
-   Share

It makes sense. It is basic business strategy. A company must have the core competencies for what they do. In this case, Albertsons should not be dealing with handling deliveries. Others will do it better, cost and efficiency wise.

My observation here in NYC is that the big guys are already doing this. I see FedEx and UPS deliveries being unloaded to what are obviously contract delivery companies regularly. Why? They do it better.

I get that the labor costs are higher in-house, and that gig workers bring their own cars and pay their own gas. While it’s “cheaper” in a low-margin business, it’s not efficient. That last mile has to be more effectively served when it’s part of a multi-stop route for an organized delivery service, not a low-paid gig worker doing one order door to door at a time.

Albertsons undoubtedly did a cost analysis and determined that the savings made by shifting to a third-party delivery service outweighed the impact of any negative publicity it would generate and any impact it would have on customer perception of its delivery service. Would this have happened if the negotiations with the union had not been contentious? That is something we will never know.

At some point doing this using in-house staff just doesn’t work economically and retailers continually look to reduce costs while doing what they do best and outsourcing other functions. This move doesn’t seem surprising viewed through that lens. The open question is around how well these independent contractors do representing the Albertsons brand to customers.

It is debatable whether third-party delivery is cheaper than in-house delivery per order due to fees charged by third-party services. What is not debatable is the wide range of extras offered by third-party services that make them attractive: rapid deployment, no-limit scaling, no HR management of delivery staff, no vehicle maintenance or insurance costs, access to detailed data on customers, access to data about SKU sales, access to the third-parties’ platform for promotion, access to the third-parties’ route planning capability, access to managing trade promotion dollars offered by suppliers through the platform, and more. For large enterprises these extras add up to big money saved and/or earned.

This move is in the best interest of the company and in the long run should be good for their employees. Delivering groceries is a whole different business than operating a store. The increase in liability alone is worth going to independent drivers.

This makes sense. The delivery service companies have core competencies that are acquired over time. Ultimately, it’s likely cheaper and more efficient to work with these area experts. Bravo Albertsons.

I believe the ability — let alone a “REQUIREMENT” — to treat workers as contractors is exactly what the penny pinchers want.

What do I make of it? More than the hapless employees will make FROM it, that’s for sure. It will be eagerly followed by the cost cutters wherever the law allows for it.

Braintrust
"While there are inevitably some savings, there are risks too in that service standards are harder to maintain and enforce."

"It is debatable whether third-party delivery is cheaper than in-house delivery per order ... What is not debatable is the wide range of extras offered by third-party services."

"The open question is around how well these independent contractors do representing the Albertsons brand to customers."