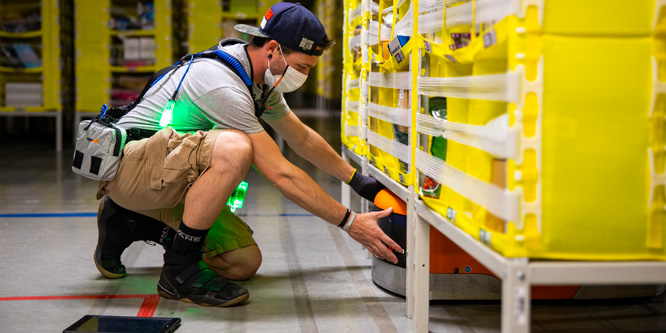 Investors, to the disbelief of many retail industry experts, were disappointed last week when Amazon.com reported a sales increase of “only” 27 percent in the second quarter. Executives from the retail and technology giant, which continues to churn out $100 billion-plus quarterly revenues, pointed out on last week’s earnings call that Amazon, in many ways, is still trying to catch up with the market opportunities that arose in 2020 from the COVID-19 chaos.

Amazon, which limited deliveries of some third-party sellers’ products at points last year, has since gone on a hiring spree while continuing to look for ways to expand its fulfillment capacity.

Said Brian Osalvsky, Amazon CFO, on the company’s earnings call last week, “Our operations network took time to step up to serve this growth in demand due to space constraints and our need to ramp up hiring quickly while prioritizing employee health and safety.”

He said unit volume out of Amazon’s fulfillment centers (direct and marketplace sellers) has doubled over the past two years. Fulfillment by Amazon has continued to increase in popularity with the platform’s third-party sellers, which accounted for 56 percent of all volume in the most recent quarter.

“We are not back to where we want to be on a number of dimensions,” Mr. Osalvsky told analysts. “We handled Q4 last year, we’ve been playing catch-up pretty much since the pandemic started. But what suffered is space and space constraints … It’s gotten better, but it was a factor last year.”

Andrea Leigh, vice president at Ideoclick and a former executive at Amazon, painted a slightly more alarming picture in an interview with Reuters. She told the news service that its continuing high sales growth rate has brought Amazon to a point where it “is running out of available space.” Compounding that problem is that it is “also running out of labor,” she said.

Amazon, as it has done in the past, is stepping up capital expenditures in the second half of the year to better meet continued growing demand. Increasing its capacity is likely to drive up costs and cut into profitability as the company pursues a pattern that has now played out over many years.

The company has continued to push faster fulfillment, including expanded one-day delivery.

DISCUSSION QUESTIONS: Do you think Amazon will face ongoing fulfillment performance issues due to lack of warehouses and/or employees to staff them? Are Amazon’s rivals dealing with similar challenges and how do you see this netting out for all the companies being affected?

Please practice The RetailWire Golden Rule when submitting your comments.
Braintrust
"Amazon’s results shouldn’t be a big surprise. Even the mighty Amazon has to manage supply chain and labor challenges."

"When you get the sort of growth that Amazon has seen since the start of the pandemic, there are major challenges. Capacity and labor are two of the biggest ones."

"We have continued to see capacity constraints at Amazon’s fulfillment centers, with sellers only able to send in inventory in small batches."

Amazon’s results shouldn’t be a big surprise. Even the mighty Amazon has to manage supply chain and labor challenges. The last 18 months have been challenging for virtually every business, so we shouldn’t expect it to be any different for Amazon. I suspect that Amazon competitors are scrambling just like Amazon is, and while things could always be better, all things considered, Amazon still performed well.

Agree! It will take time given the current labor market and continued logistical issues across the industry, but Amazon will surely work this out, as its strength is in operational efficiency. Amazon’s rivals are all dealing with these challenges as well, but our bar is higher for Amazon because it’s best known for setting the industry standard on delivery timing.

Amazon is no different than any other business and they have been challenged just like the rest. I think it will still be some time before they see anything semi-normal in regards to the labor opportunities.

I think Amazon may well be worse off than some other retailers — at least if what we hear anecdotally about employee treatment is true. I’ve also noticed that Amazon has gotten faster again, yet its delivery timing is not terribly predictable. It will over-deliver and under-deliver. In other words, I’ll get product a day early sometimes, and a day late others. Since I work from home, it doesn’t much matter to me. If I worked out of the home in a high risk area it would matter a lot more.

Clearly supply chain issues aren’t going away any time soon. I do think some companies have done a better job helping their employees feel good about their jobs (think Walmart and Target), while in general, Americans seem to be rooting for the independents and made in America.

It is much easier to manage a business in growth than it is one in decline. However when you get the sort of growth that Amazon has seen since the start of the pandemic, there are major challenges. Capacity and labor are two of the biggest ones. These are still easier problems to deal with than a business in decline that has excess capacity but no sales so most retailers will not be losing sleep over Amazon’s problems. This could certainly bring about more unhappy customers who do not get the service they desire and have paid for. If they start to switch off in large numbers, Amazon could be heading in the wrong direction, adding capacity when sales start to slow. Then we will see how good they are as a management team. Similarly, if they are not able to fulfill third-party seller demand they will start to lose them to other platforms and there are some big players like Walmart and Target capable of picking them up. Massive growth can be great but… Read more »
3
|
0
-   Share

We have continued to see capacity constraints at Amazon’s fulfillment centers, with sellers only able to send in inventory in small batches. There will be a trickle effect as sellers stock out or begin to rely on sometimes more expensive third-party fulfillment options. Amazon does need to prioritize increasing capacity so they can continue to reap the benefits of the surge in e-commerce this last year.

In what episode of The Twilight Zone would “only” a 27 percent sales increase be a shocking revelation? This says more about the myth of Amazon and its PR spin than the reality. Xerox, Sears, GE, GM and buckets more had indomitable market positions, yet they all floundered eventually. Technology, data, and lobbyists will not insulate Amazon from the same because, in the end, it’s the management that crashes these businesses.

In the near term, labor and/or real estate shortages are something Amazon management has to deal with, like every other business. The company certainly has deep enough pockets to buy its way out via premiums, but doesn’t want to pay (invest really) to do so, despite the lessons of years of investment (losses) to build the base that paid off with today’s market position. So there’s no tiny violin playing sad music for Amazon.

I don’t like research based on samples of one, but I have experienced a dramatic increase in late or delayed deliveries from Amazon. Using my numbers of deliveries as the sample, it’s been a race downward in expectation meeting. Promises of next-day delivery at time of order extend to two or more days. Two-day deliveries are becoming rare. Apology emails – that I have never seen before – for delivery delays appear instead of the items ordered. I’ve switched to brick-and-mortar buying for a number of items because the tried and true two-day delivery promise of Amazon was unavailable for certain items I needed. It seems indicative of labor shortages and supply chain issues. Can anyone expand on this sample with a larger data set? Amazon has always been good at making and keeping promises for what you ordered arriving when they said it would. That appears broken.

The gig economy, fueled by the pandemic, is making a permanent impact on the workforce. Amazon as well as other retailers, brands and restaurants must find a way to offer flexibility to associates.

Braintrust
"Amazon’s results shouldn’t be a big surprise. Even the mighty Amazon has to manage supply chain and labor challenges."

"When you get the sort of growth that Amazon has seen since the start of the pandemic, there are major challenges. Capacity and labor are two of the biggest ones."

"We have continued to see capacity constraints at Amazon’s fulfillment centers, with sellers only able to send in inventory in small batches."