Are Chewy and PetSmart better off apart? 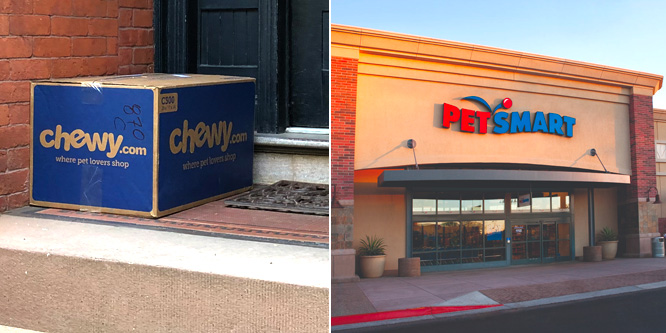 What started as a relationship with such promise is coming to an end. That’s the story of Chewy and PetSmart. A little more than three years after PetSmart’s acquisition of the online pet products retailer was announced, the private equity owner of the companies has decided to split them apart.

The deal, according to a Bloomberg report last week, would enable BC Partners to “recapitalize PetSmart with $1.3 billion of equity and $4.65 billion of debt raised from institutional money managers.”

Splitting the companies at this time is designed to take advantage of an atmosphere in which pet product merchants are benefitting from the increased time that consumers are spending at home with their four-legged family members.

Last month, Chewy announced that it had opened its first “limited-catalog fulfillment center” in Kansas City to handle the “demand shock” in orders it has felt since the pandemic broke out. The e-tailer saw its shipping volume jump 50 percent in March versus February, which led to an unusually high amount of overstocks and other logistical problems that Chewy has sought to resolve.

The online pet products seller is also still struggling with profitability. The company’s management has continued to point to market share as the key to achieving a future that has it firmly in the black.

Management has consistently held that online selling of pet products is still in its infancy, and that adoption, assisted by the pandemic, is only going up. Chewy CEO Sumit Singh told CNBC last year that he believed his company could move from its then 14 percent market penetration to as much as 30 percent in a few years. He noted that Chewy was capturing about 40 percent of its customers’ spending on pets and that there was room for improvement in that area, as well.

As for PetSmart, it has also benefited, no doubt, from the same factors that have driven Chewy’s business as well as that of others in the category.

When PetSmart made the deal to acquire Chewy in 2017, its former CEO Micheal Massey said, “Chewy’s high-touch customer e-commerce service model and culture centered around a love of pets is the ideal complement to PetSmart’s store footprint and diverse offerings.” The question now is whether PetSmart learned what it needed to learn from Chewy before the breakup.

DISCUSSION QUESTIONS: What do you expect to see from Chewy and PetSmart following their split? What will it mean for Petco and other retailers in the pet products space?

Please practice The RetailWire Golden Rule when submitting your comments.
Braintrust
"When I see the amount of debt with which PetSmart will be saddled, I cringe. The outcome has to be better for Chewy."

"When they IPOed Chewy, they were left with two siloed organizations that couldn’t leverage each other."

"The acquisition was the classical management attempt to buy their way to success/profitability in an area they were underserving. Sometimes it doesn’t work."

15 Comments on "Are Chewy and PetSmart better off apart?"

That’s a really interesting question. As most folks know, I have always been a very big Chewy fan. Lately however, the thing I liked the most about their deliveries – the care with which all cases of cat food are packed — has fallen down some. I am not sure if this was pressure from the parent company or if it was overarching pressure from the Street.

Chewy must retain its position as customer service king. Whether or not the category is doing well, Chewy generally should out-perform the rest.

I’m assuming it will do well, and I hope Chewy continues to thrive and PetSmart works out its in-store issues.

Now, in an era when contactless selling has become important, one hopes PetSmart is up for the task. The other aspects of store-based retailing for pets – especially community building – are on hold for now.

Service down? Losing their mantra? Look directly to the private equity owners who care only about the short term bottom line and know know nothing about retailing and customers.

Even if the brands remained separate, these two business should have been fully integrated to drive economies of scale and to create a proper omnichannel offering to generate efficiencies. There is a financial logic, especially in terms of capital raising and maximizing business valuations, to separating them. However I think the future is much bleaker for Chewy as a separate entity. Success cannot just be measured in market share terms, there has to be a pathway to profitability and Chewy has yet to demonstrate it is on that trajectory.

We’re fairly involved in the pet industry. Omnichannel is an ideal path to sustainable profitability. While yes everything can be sold online, not everything can be sold profitably that easily. In the pet industry, there are a lot of high-margin categories but pet food is a bulky, lower margin product that literally weighs down profitability with e-commerce. This is where store pick-up steps in to help during and post-COVID to reduce costs, offer differentiating service and get those impulse buys.

When I see the amount of debt with which PetSmart will be saddled, I cringe. The outcome has to be better for Chewy.

This appears to be more of a financially driven move vs. a consumer-driven activity. It is that the overall leverage of PetSmart will decline due to this recapitalization. What is missing in this announcement is how it helps their shoppers.

As mentioned in the latest financial news, Chewy is performing very well in this climate. Many pet parents equate e-commerce for pets with Chewy’s and they have 14 percent penetration with a goal of 30 percent household penetration. For PetSmart, I hoped they learned more about the auto-ship side of e-commerce from Chewy because Chewy seems very strong in this area with 68 percent of their sales in the latest quarter coming from ongoing pet product replenishment for their customers.

It really speaks to the obvious failure in realizing the very obvious synergies.

I expect to see the same results as with other retailers when private equity get involved. Every decision is a financial decision. In this case dollars trump good retail strategy.

I certainly understand why they did it and they will have all their their money back and boatloads more from their original investment and be long gone as both these retailers hit the skids.

I’m surprised at the breakup. Looking at this from a distance, it was like the old saying: opposites attract. Chewy could use PetSmart locations as distribution outlets. PetSmart could reach a completely different customer they haven’t had with delivery through Chewy. I expect Chewy to grow, as convenience is an extremely important part of the customer experience today. And convenience is a competitive advantage and a disruptor.

I don’t think it will work out optimally for either entity, but the writing has been on the wall since the Chewy IPO. Chewy and PetSmart needed to be a fully integrated entity. PetSmart was a digital laggard before the acquisition, and any progress they were trying/hoping to make in digital got quickly waylaid by Chewy’s digital team. When they IPOed Chewy, they were left with two siloed organizations that couldn’t leverage each other. The pet category is now digital-first. 1.6 million new pet owners were created by COVID-19 and all started their experience getting their food/supplies online. Digital share in pets went up over 10 percent as a direct result of COVID-19. So to compete in pet moving forward, you need a robust digital experience. PetSmart is further behind digitally than they were pre-Chewy acquisition, and now saddled with a ton of debt, so it’s going to be hard for them to play digital catch-up. Chewy is going to need to complete with strong omnichannel offerings from Walmart and Target that have significant cost… Read more »
2
|
0
-   Share

The acquisition was the classical management attempt to buy their way to success/profitability in an area they were underserving. Sometimes it doesn’t work. In fact, this reminds me of the Walmart Jet acquisition, but I think even in a bad mix of cultures, Walmart received some gains that PetSmart did not.

Essentially, everything is being reset to where it was pre-acquisition, except for some financial wounds sustained and potential lessons lost(?) on PetSmart. Anyone that wants to be a sustainable/profitable retailer or e-tailer has to understand customer needs and attempt every day to exceed them while staying in the black.

I’m a bit puzzled actually (it’s Friday). Given the logic of unified commerce and the importance of providing customers what they want in whatever mode they choose to acquire product, splitting a successful online capability from an in-store one rather than creating a unified brand/experience seems counter-intuitive. But this seems to be purely a financial transaction and that is seldom based on what’s good for the customer or the store associates.

As others have posted, this demonstrates a missed opportunity. PetSmart was a leader for in-store experience and Chewy provided an opportunity to really accelerate online sales and grow share. The inability to fully integrate the two into a multi-banner, omnichannel strategy to leverage those strengths and capabilities is unfortunate. It remains to be seen if the split will benefit the two parties, but it is clearly a bold move to sell off your ecommerce side in this current business environment.

It seldom looks good when something is UN-done so quickly: if the idea was a good one initially, then what’s changed? And if it wasn’t, then what does that say about the competency of management?

I’m not sure either entity wins out in the end. There were obvious synergies that should have been realized over the past 3 years. Clearly, that did not happen. They remained siloed and failed to leverage each other’s strengths. PetSmart was not digitally savvy, while Chewy lacked stores, which ultimately would hinder their growth in this market.

Then COVID happened and changed everything.

Pet owners seem to have discovered a new friend with online pet supplies. Chewy is obviously better positioned to capitalize on that. Still, without the benefit of a store footprint to facilitate distribution in an equivalent way Target has done, I don’t see them having long-term success in a post-pandemic world.

PetSmart is going to be saddled with a mountain of debt, and we’ve seen this story play out many times over. Unfortunately, the ending is usually a tragic one, and since there isn’t much evidence that PetSmart learned some digital know-how from Chewy, I don’t expect the outlook to be a good one for them.

Braintrust
"When I see the amount of debt with which PetSmart will be saddled, I cringe. The outcome has to be better for Chewy."

"When they IPOed Chewy, they were left with two siloed organizations that couldn’t leverage each other."

"The acquisition was the classical management attempt to buy their way to success/profitability in an area they were underserving. Sometimes it doesn’t work."