Are grocers profiteering from inflation? 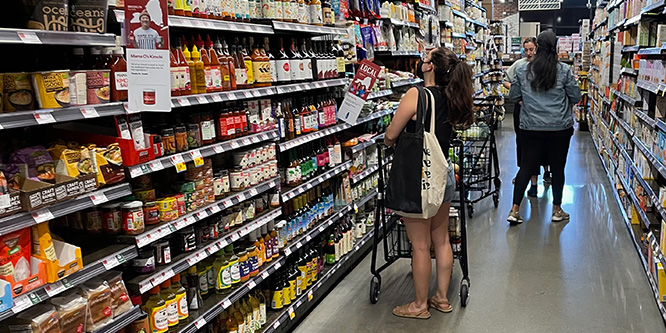 In a tweet Tuesday, Gail Vaz-Oxlade, a Canadian celebrity money expert, called for a boycott of Loblaws, encouraging followers to “join in sending a message to the Loblaws group that you do NOT appreciate their profiting and calling it ‘inflation.’”

While record profits from oil companies have been called out as profiteering, grocers and food manufacturers, particularly the major meat and poultry providers, have heard similar charges amid rampant food inflation globally. Many are reporting record or at least robust earnings amid pricing actions.

Alleged price-gouging by grocers recently trended as a topic in Canada after a Toronto Star investigation found Canada’s three largest grocers — Loblaws, Sobeys and Metro — increasing their profit margins, suggesting that price hikes are being passed through at a higher rate than cost increases.

The grocers attributed the margin gains to operational efficiencies, reduced costs and changing shopper habits, such as increased pharmacy sales. However, several economists were quoted as saying they believe grocers’ margins overly benefited from pricing actions.

“What’s often underappreciated is the profit price spiral whereby corporations realize that consumers are willing to pay higher prices, and they increase their prices to not only pass on their own costs, but take a slice on top,” David Macdonald, senior economist at the Canadian Centre for Policy Alternatives, told the Star.

Hal Singer, managing director of Econ One Research and an adjunct professor at the Georgetown University McDonough School of Business, recently told The Hill that earnings calls are one method companies are using to signal and coordinate price increases without overtly violating antitrust laws. He said, “A bout of inflation creates an opportunity that didn’t previously exist for firms in concentrated industries to coordinate better their pricing decisions.”

DISCUSSION QUESTIONS: How would you define profiteering in the current inflationary climate and are certain grocers and food manufacturers guilty? Do you see a potential backlash or a need for better messaging around pricing actions?

Please practice The RetailWire Golden Rule when submitting your comments.
Braintrust
"No backlash foreseen, but don't be a price increase leader."

"Just a few months ago, they were heaping praise on the supermarket industry for helping feed the country during the worst pandemic in a century..."

"I don’t know whether grocers are profiteering, but I do know that i’m not going to buy that large chocolate ice cream that Publix wanted $9.19 for."

15 Comments on "Are grocers profiteering from inflation?"

Generally, I do not believe most U.S. food retailers are profiteering. They are simply increasing prices to account for their own higher costs and, even then, not all costs are being passed across in full. The bottom lines of most retailers are under pressure, as we have seen from the raft of updated guidance from Walmart and others. Albertsons’ latest results are a case in point: while sales and profits are up, the gross margin rate is firmly down.

I don’t know whether grocers are profiteering, but I do know that i’m not going to buy that large chocolate ice cream that Publix wanted $9.19 for.

Vendors are passing cost increases on, and unfortunately retailers have to take them. In some cases they have been holding off, and retailers have appreciated that, but that time has run out and it’s open season on cost increases. As a retailer, we must manage that as best as we can so as to not create sticker shock among our customers.

Reasonable price increases are tolerable. Retailers have a gross margin target that they need to meet. If their costs go up by a certain percentage, then retail prices should go up only enough to see their gross margin number at their new cost. Any increase higher than by those numbers is profiteering. Unless there is price fixing among retailers, the consumer will determine what new prices they will tolerate.

Grocers have always run on thin margins. If they’re trying to grow it a little more, that’s their business. Remember that a pricing action by a grocery supplier does not have a 1:1 translation into grocery store price. You take your wholesale price up 6 cents a package but the retailer prices on the 9s, so that means an 8 cent increase at shelf. That’s not profiteering. No backlash foreseen, but don’t be a price increase leader.

Grocery retail has historically operated on thin margins, and many of the largest retailers in the U.S. are lowering their forecasts for sales and profits (Walmart, Target, etc). The anger ought not be directed to retailers or food manufacturers. Rather, it ought to be directed to our government with continued spending and slow Fed reactionary policy.

My logistics professors boiled it down to, “you’ll either pay up front, or pay more later on.” Well, we didn’t do the homework for the last 40 years…. Inflation has many root causes and they all interact and reinforce one another. We’ve been talking about transportation labor shortages for two decades, and guess what, all the predictions were right yet no one did anything until the crisis was upon us. We’ve been talking about the need to re-shore and localize supply chains but barely anything was done until the factories closed up for COVID and there weren’t shipping containers. We’ve been talking about seriously reducing our reliance on hydrocarbons and making incremental progress but Europe now has to go cold-turkey on natural gas because of Russia. We’ve been talking about the profit-grabbing elements of healthcare and petroleum, unhealthy consolidation in food companies and paper producers, but haven’t taken antitrust action because politics and lobbying. Frankly with historically low interest rates it’s the right decision to invest in infrastructure like railroads, power distribution, airports, water, broadband,… Read more »
5
|
0
-   Share

Grocery stores typically live on very thin margins and when inflation hits and the buyers stop splurging on higher end items that have margin the stores need to build in a buffer to keep the doors open.

Retailers have been helped by a number of high profile manufacturers publicly talking about increasing their prices. However no retailer wants to be seen to be leading and driving up prices. Inflation happens on the sell side as well as the cost side and provided that a balance is struck and operational efficiency improved retailers can gain customer support by showing lower levels of price increases. Announcing huge profit increases like the energy companies is not good politics for retailers.

It’s amazing how short people’s memories are. Just a few months ago, they were heaping praise on the supermarket industry for helping feed the country during the worst pandemic in a century, even classifying store workers as essential. Now they’re complaining about companies tacking on a few cents to cover extra costs. Further proof that retail would be easy if we didn’t have such fickle customers.

In an already margin-compressed sector, supply chain challenges, inflation rates, and perpetually increasing business costs have significantly impacted the grocery industry. The grocery industry is not profiteering in the current inflationary climate. Instead, they are attempting to stay afloat and maintain their razor-thin margins.

Consumers see and feel the impact of the price increases at their local grocery store. It requires consumers to be more value-driven and conscious of what and how much they buy. As an extension of goodwill, this is a prime opportunity for grocers to provide more promotions, incentives, and private label offerings to help consumers ride out the storm.

Grocers typically operate on net margins of one to two percent so it’s hard to see how they are gouging their customers in any serious way.

Most of the quarterly sales reports coming in have shown net revenue gains equal to or below the current year-over-year inflation rate.

Any additional profits that supermarkets are reaping at this point likely come from several factors including:

What a silly premise! Grocery is one of the most competitive — and lowest margin — industries in the country, and food prices are notoriously volatile. The idea that there’s some cabal of evil grocers rubbing their hands together in glee as they “profiteer” is … mirthful.

Broad brush stroke assumptions from economists and politicians who have never worked in retail or grocery is reckless and diminishes their credibility.

There’s always more to the story which doesn’t fit a soundbite or headline. Margin increases may need to meet the rest of the operational costs of the business. Accusers forget the past 2.5 years grocers have also dealt with higher wages, employee shortages, more expensive healthcare and benefits, higher fuel costs, delays in equipment repair (impacting operations), and new costs of prioritizing supply chain workarounds to find products amid shortages. EBIDTA, if available and published, provides more to this story.

In a recent LinkedIn survey, I asked retailers how much of their cost increases due to inflation are being passed to the consumer. It’s worth noting: 95% responded that 100% of those costs are indeed being passed to the consumer. With inflation rapidly rising around the globe – cresting 7% in the U.S. (the highest in nearly 40 years), reaching a record high of 5% in the EU, and topping 10% in Brazil, for example – and rising over this trend could trigger a big disconnect between retailers and customers. For smart, data-driven retailers, however, inflation represents a great opportunity to capture new market share. If their competitors are passing 100% of the cost increase on all items to the customer, they haven’t recognized the nuances of today’s competitive landscape. But an intelligent retailer, who understands the price elasticity of individual products, can respond with surgical precision to the price sensitivities of their customers. In an industry where margins are razor-thin, personalizing retail prices at scale – the way Amazon does – could provide retailers… Read more »
2
|
0
-   Share

Braintrust
"No backlash foreseen, but don't be a price increase leader."

"Just a few months ago, they were heaping praise on the supermarket industry for helping feed the country during the worst pandemic in a century..."

"I don’t know whether grocers are profiteering, but I do know that i’m not going to buy that large chocolate ice cream that Publix wanted $9.19 for."