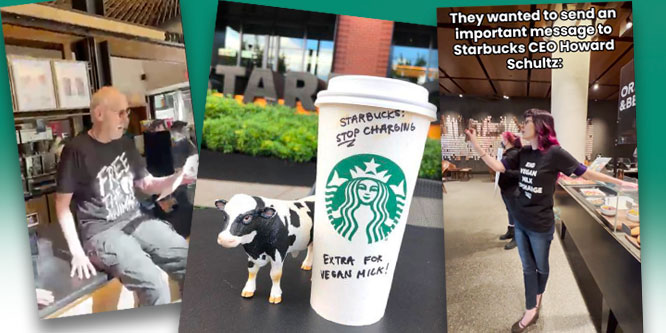 James Cromwell, the Oscar-nominated actor, best known for his roles in such films as “Babe,” “The Green Mile” and the HBO series “Succession” has a problem with Starbucks over its policy of upcharging for non-dairy milk options used in the chain’s drinks. He took his disagreement public yesterday at a Starbucks in Manhattan after he glued his hand to the counter as part of a PETA (People for the Ethical Treatment of Animals) protest.

Mr. Cromwell, wearing a “Free the Animals” t-shirt, sat on the store’s counter while baristas continued to make drinks behind him.

“More than 13,000 customers have asked you,” said the 82-year-old actor. “Now we’re asking: Will you stop charging more for vegan milk? When will you stop raking in huge profits while customers, animals and the environment suffer?”

Police arrived at the scene and told protestors that they would have to leave or be arrested. Mr. Cromwell and another man detached themselves from the counter and left the store without charges.

PETA claims that Starbucks charges up to 80 cents more for lattes made with almond, coconut, oat or soy milk vs. cow milk.

“We respect our customers’ rights to respectfully voice their opinions so long as it does not disrupt our store operations,” a Starbucks spokesperson said in a statement to The Washington Post. “Customers can customize any beverage on the menu with a non-dairy milk, including soy, coconut, almond and oat for an additional cost (similar to other beverage customizations such as an additional espresso shot or syrup). Pricing varies market by market.”

Mr. Cromwell is not the first personality to take issue with Starbucks’ upcharge for non-dairy milk. Sir Paul McCartney in March wrote a letter to the retail coffee giant asking it to do away with the practice.

The former Beatle wrote that Starbucks no longer charges extra for non-dairy milk in the UK and he was surprised that it was being done in the U.S., according to a Vanity Fair report. He asked the chain to put an end to the practice as a service to the environment.

Sir Paul and Mr. Cromwell pointed out that other retailers including Panera Bread, Philz Coffee, Pret A Manger and Wawa do not charge customers more for non-dairy beverages in their coffee or tea.

Please practice The RetailWire Golden Rule when submitting your comments.
Braintrust
"I don’t condone stunts like those used in this example, but I suspect it will encourage Starbucks to at least reconsider its policies, hence encouraging more stunts."

Starbucks can charge what it wants. Customers can decide whether those prices are worth it and opt to take their business elsewhere if they wish. Customers can also complain and lobby Starbucks. However, for what it’s worth, I don’t think the voice of celebrities should count any more than the voice of an average consumer. And I am not impressed by stunts like gluing hands to counters – although it certainly achieved its aim of generating publicity.

Neil, may I give you five thumbs up?

If you do I’ll buy you a coffee (with non-dairy milk, if you wish)! Haha!

What if, just what if, Starbucks lets him stay glued to the counter? Close up at night, wave with a smile, turn off the lights, lock the door. Let him enjoy the evening. Kind of like dealing with a toddler throwing a tantrum.

Starbucks will end its up-charges for non-dairy additions to beverages if enough celebrities publicly complain about it. Once they accomplish that maybe celebs can take on hotel resort fees.

When the fees cost almost as much as the room…

And after that they can tackle the absurd charges on car rentals – weird fees that are just a way of cashing in and generating more money!

How about service fees at restaurants? It’s outta hand.

It really is. Just give me the price! If it’s high fine, I can decide whether it’s worth it. But don’t add all of these fake fees with ridiculous names. And going back to your point about hotels: some still add fees for internet – yes the internet that I can get in Target and Walmart for FREE!

And when they do, they will make every other drink $0.05 more expensive to cover the costs and nobody will be any the wiser.

Well, if celebrities have issues, let’s all jump to fix them. Realistically, don’t we have more important things to worry about versus what celebrities think? Different products have different costs. Full stop.

It’s simple, really: The more negative attention celebrities bring, the more pressure Starbucks executives will feel. I don’t condone stunts like those used in this example, but I suspect it will encourage Starbucks to at least reconsider its policies, hence encouraging more stunts. Not sure that’s all that good for us as a society, but that wasn’t the question George raised…

Those who object are showing pure ignorance. If they want the up-charges to go away for alternative milk, start with the producers? If they’re going to demonstrate, demonstrate in front of the supermarket where the real volumes are.

Celebrity griping only makes the complaint more visible – not more weighty. I read this while at Walmart so I did some homework – soy and almond milk at Walmart are about 15 percent higher in cost compared to regular milk. So if this holds true across the country, then up-charging makes sense and customers should understand – higher product cost leads to higher retail cost.

I appreciate you doing the fieldwork on this!

Pretty logical thinking. Add in side requests for oat milk, coconut milk, hemp, cashew. If the customer wants a myriad of these choices, then Starbucks needs to build out more refrigeration to hold it, handle occasionally used containers. Someone has to pay for it.

Starbucks needs to end this. Either raise the milk price or lower the milk alternative pricing. The public has been told that oat milk, pecan milk, and pea milk are so much better for you, but yet it’s going to cost you more to make the better-for-you switch? It makes no sense.

Richard, How much more does Main Street Markets charge for alternative milk?

Let me see if I understand it correctly – non-dairy milk costs more across the board than dairy based milk. Celebs, a group not usually constrained by personal budgets, want Starbucks to eat those costs so they can save a bit on their coffee choices. Feels like another fake cause from a bored celeb.

You very clearly understand it, Gary.

Multi-millionaires have a problem with 80 cent surcharges. Is it the 80 cents or is it the sustainability, or that it pertains to vegan milk? Smaller portions that are outside the normal routine in a coffee house cause friction. Any retailer should understand that. I can’t believe we’re talking about this here.

At SOME point I would like to think the seemingly never-ending practice of things like upcharges for things that don’t cost the brand anymore and my current favorite, adding tips when no actual service is being provided, will begin to backfire for retailers and brands. However perhaps culturally this is just the norm now and I’m just an old fart longing for days gone by when I actually felt like I was getting value for the product or service I was consuming!

The free market solves some problems but not others. Animal rights and animal cruelty have never been something many big corporations care much about. So, as much as it is fun to mock celebrities for trying to move the needle, something like this puts a little bit more pressure on companies like Starbucks to do the right thing. Yes, Starbucks can charge what it wants and the free market by and large will dictate what happens, but little by little celebrities can raise awareness on important issues. In other words, baby steps.

I mean, let’s get real. The environmental impact of a massive coffee chain like Starbucks is almost too vast to comprehend: the water and energy consumption to grow the coffee, transport it, to run the operations, produce and dispose of the packaging, not to mention the millions of consumers idling in their cars at drive thrus. Where do you start? I guess with cows. If consumers are concerned about the environment, make your coffee at home and drink it in your own mug.

I am exhausted by what is triggering people today. Straws, bags, light bulbs, milk, gas. Enough. Businesses establish costs based on their margin needs to grow their business. As a Starbucks stock holder, going from $116 down to $71.26 as of today is more cause for concern than 80¢ for specialty milk. Pension funds/401ks, personal investments are all at risk when we demand a commoditized way of running our economy.

No, I don’t think outbursts by bored celebrities (though, Paul McCartney is a genius), will or should change how companies cost their goods–consumer use will. If people stop going there because it is too expensive, Starbucks will adjust their pricing. If the supply chain reduces their cost of goods due to scale, Starbucks will adjust their pricing. If we want to pay for organic products, specialty foods, environmentally friendly goods, pay people a “living wage” and still stay in business, something has got to give. It is called the free market. So, if you want to change the business, start your own coffee shop.

Recently replaced Starbucks CEO Kevin Johnson noted that drinks with alt milk equaled about 15%-20% of their orders. And one of the challenges with keeping multiple containers of alt flavors and perishable liquids is not only managing what is partially used (shrink), but also stocking and making extra room to refrigerate it.

So should the 80%-85% of customers who order mainstream milk drinks pay for these costs in across the board hikes? Seems logical for now the upcharge for alt liquids is in place.

I think objections by celebrities definitely increases the likelihood of Starbucks making changes to their fees. Especially when it’s done under the guise that it’s better for the planet and not just because it costs more. It’s a perfect opportunity for Starbucks to do the right thing, say it was wrong to upcharge the customer, and then remove the fee. Great PR and good will all around.

Honestly, people need more to do. With all the storms swirling around the world today this is your big issue?

Braintrust
"I don’t condone stunts like those used in this example, but I suspect it will encourage Starbucks to at least reconsider its policies, hence encouraging more stunts."