Can McD’s succeed with commercials that don’t mention its name? 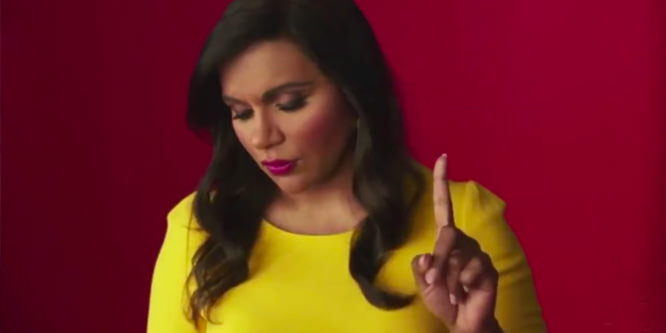 McDonald’s latest commercial stars the actress Mindy Kaling, but doesn’t mention its name or display its logo. The spot is part of McDonald’s first unbranded marketing campaign in which it attempts to use the power of the Coca-Cola brand and Google search to drive traffic — particularly younger consumers with smartphones — in its direction.

In the commercial, Ms. Kaling says, “According to some, there is a place where Coca-Cola tastes like so good. Go ahead, do a Google search for that place where Coke tastes so good. Yeah, right now. I’ll wait.”

After checking her own phone to some background music, Ms. Kaling says, “Got it? It’s crazy, right? When was the last time that anyone on the internet agreed on anything? That was a rhetorical question. The answer is never.”

The screen then transitions to a search field with the words “that place where Coke tastes SO good.” Underneath, copy appears that reads “is now selling any size for $1.”

A second spot, which features Ms. Kaling interacting with “beverage technician Rick” involves a back and forth between the two during which the word McDonald’s is bleeped out each time it is spoken. Ms. Kaling admonishes Rick for saying the chain’s name because each utterance will bring a bleep that makes it sound as if he is swearing. After a back and forth, the same search field pops up with the pitch for $1 Cokes.

As a New York Times report points out, McDonald’s has taken its unbranding to the limit. The company makes no mention of the campaign on its website or on any of its official social channels. The two YouTube pages where RetailWire found the new commercials had fewer than 20,000 views as of 3:00 p.m. yesterday.

The McDonald’s campaign is the second in recent weeks by a fast food chain looking to use the power of Google to its own benefit. Burger King and the tech giant are at odds over “Connected Whopper” spots designed to activate Google Home digital assistants with the question, “Okay Google, what is the Whopper burger?”

DISCUSSION QUESTIONS: Will McDonald’s unbranded campaign prove successful in driving sales of Coke at the chain’s restaurants? Do you see more brands and retailers making greater use of unbranded campaigns as part of their advertising?

Please practice The RetailWire Golden Rule when submitting your comments.
Braintrust
"I'm thinking that McDonald's is aiming for multi-platform engagement by its customers."

"I’d love to know if they have any data-based reason to believe this will improve sales."

"If anything, Coke is the real winner ... It’s the McDonald’s version of the “Got Milk” campaign..."

21 Comments on "Can McD’s succeed with commercials that don’t mention its name?"

That was a McDonald’s commercial? I’ve seen a few of them and did not make that connection. Enough said.

Some consumers will get sucked in by this gimmick while others will be turned off by it. McDonald’s problems will not be solved by $1 Cokes. Its food is out of favor with many consumers. Fix the food, then try the gimmicks.

Nobody here gets it. This was a Coke commercial. Coke has a long history of subliminal advertising. All they did was use McDonald’s as a host to lay their egg.

Shiny object syndrome now used as PR. Yes you can get people to do something but does that result in sales or just more rats to the cheese?

I have to disagree with Dave on this one. I’m thinking that McDonald’s is aiming for multi-platform engagement by its customers, especially Millennials and younger who are adept at that sort of thing. I’m no Millennial, but as soon as I saw the ad I started Googling on my nearby laptop — I found out the ad was for McDonald’s and I also learned that Mindy Kaling is a McD’s devotee. (She joked that she wanted to be paid in fries for her work.) And — most importantly — the ad made a point about the taste of Coke products alongside the food at McDonald’s. If my experience is typical — and if the ad gets people talking — I’d rate it as a big success.

Thanks for clarifying! I saw this ad and thought it was a Coke ad but wondered what the heck it was afterwards (and during as well). It’s a nice/innovative try but, frankly, I can’t imagine for a minute the 18 to 24 demo (McDonald’s target) actually paying attention to what’s being said. It’s kind of serious and definitely slow — two traits that are killers for that audience.

Brilliant experiment. The more you get your audience to engage in the message, the more commitment they will have in the outcome.

Why not try something different that also leverages how people are immersed in their mobile devices across everything they do today? McDonald’s has got something here.

I’d love to know if they have any data-based reason to believe this will improve sales. I’d even settle for improved brand equity or improved likability ratings.

This one was lost on me as well! While I understand it wasn’t aimed at my demographic, I can’t imagine it has been a successful campaign. The spot assumes people are actually watching, and more importantly paying attention, to the message. The Millennial and younger audience simply isn’t that interested in McDonald’s or Coke to care. From a creative perspective, I find it clever but I believe it stumbles on a pragmatic advertising level. If anything, Coke is the real winner (thing?!) It’s the McDonald’s version of the “Got Milk” campaign — interesting and gets PR mileage but is not effective in selling more milk.

Sure we feel the chemical rush when our hardwired brains are activated by successful discovery, but like finding hidden Easter treats, it has its limit. This conjured approach to brand engagement comes off as marketing-manufactured deception, like when the boy in the Christmas movie realizes that the “be sure to drink your Ovaltine” spot is a crummy commercial. Brands should give it to us straight.

I’m with Dick on this one. It’s going to go down well with its intended audience — younger consumers. Expect a lot more interaction between digital platforms going forward.

If you caught the segment on the subject of brain hacking on CBS 60 minutes two weeks ago, you might say that a significant portion of viewers of this ad will compulsively whip out their phones and start playing along with the Google search game. The question is, what portion of that audience will engage? It’s long overdue that we stop referring to all young consumers as Millennials. The group we studied in 2005 is now 12 years older. Most of that group probably can’t be bothered to play this Google game. They’re too busy preparing for tomorrow’s work or putting their young children to bed. The likely audience that will engage with these commercials is the preteen, teen group. Call them Generation Z if you wish. It is easy to criticize anything out of the norm and, in this case, this unbranded approach is a worthy experiment. Not all will get it, but McDonald’s will hopefully discover who will engage with this form of interaction. Hopefully that group has the power and resources to… Read more »
4
|
0
-   Share

While the Don Draper era, Madison Avenue vintage of the industrial advertising complex was built around cultivating experiences, emotions, feelings and nostalgia far more significant than the brand promotion itself, this particular McDonald’s commercial was very underwhelming to say the least.

I do understand that McDonald’s is hoping to connect with a digital-first, socially-empowered, multi-channel and connected consumer. However there are better ways of approaching this strategy than requesting either a Google search or, as Burger King attempted, asking Google’s Home to do a search via voice commands.

No disrespect guys, but you are way off on what our generation likes. I stopped at the 11 second mark as soon as she said “I’ll wait.” No Generation Z person on the planet is going to watch this and that is from 23-year-olds down. Did they not get the message about us having zero attention spans and wanting to receive the message quick and to the point? We will never waste our time searching to find out what the commercial is about. Just slapping that commercial on YouTube is not going to make me watch it. It’s terrible and makes no sense and who is that girl anyway? It is not easy to grab our attention. You are going to have to work at this, you are going to have to create different content for each generation or at least for Generation Z. Time is our most precious thing. If you want any of it you are going to have to show us something shareable. tell us what your new product is and what… Read more »
5
|
-2
-   Share

I get the creative gimmick. But does it pique interest? Is the brand relevant to the target?
Is brand Mindy bringing compelling equity to drive reconsideration? Is a trip to McDonald’s the experience the target desires? For me, the answers won’t help McDonald’s or its “ingredient brand” Coke.

I don’t think this is about “unbranded content.” It is about piquing interest that prompts a search. (Is Google the real winner?) For the right brand with the right target, this device could work. I think the payoff has to be compelling to create the desired effect, e.g., a previously unplanned trip to McDonald’s. This outcome isn’t compelling — drinking Coke at McDonald’s.

It might have some novelty value, but other than that, I find it annoying on several levels (the claim is frivolous, the audience is asked to do something for no particular reason, I’m not sure Ms. Kaling is well known enough to carry the spot).

On a broader level, for a company eager to reinvent itself as offering more with regard to both quality and variety, I find an appeal of cheap soda a decided step backward.

Nice to try to engage but the process of engagement takes more persuasion, intrigue, enticement than this series delivers. I don’t see this ad moving anyone towards any action. I would unrun this unbranding campaign.

Also, I’ve always felt the avoidance of brand identification in an ad is a message to the consumer that there is something wrong with the brand.

Max is right. The Coke is so good, but the food over the years has begun to suck. Cheeseburgers need to be reborn. Especially the junior burger. Wendy’s food is also going downhill. Frosties are still good, but I only get small ones.

All these fast foods need a wake up call! In-N-Out is still great. Send Mac execs there to research….

The commercials that came out of this campaign seem like a combination of two unique ideas that had potential to succeed if they were properly executed individually. Having an unbranded campaign that made it abundantly obvious they were talking about McDonald’s would have been successful. Something more well-known such as the golden arches. The interesting tidbit about Coca-Cola tasting better at McDonald’s could have been more successful if it was made to be a collaborative commercial with Coke. I had heard of it before so I could make the connection, but most people wouldn’t.

Looking into the all the commercials that they put out for this campaign, the view count is suffering and it’s very clear they aren’t being received well at all. Best of luck next time McDonald’s.

Braintrust
"I'm thinking that McDonald's is aiming for multi-platform engagement by its customers."

"I’d love to know if they have any data-based reason to believe this will improve sales."

"If anything, Coke is the real winner ... It’s the McDonald’s version of the “Got Milk” campaign..."