Can retail teach America how to recycle better? 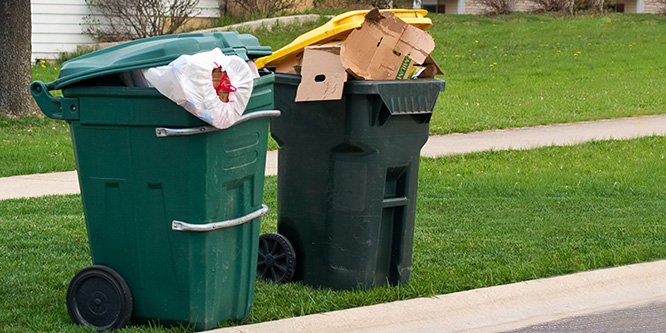 A survey from packaging company DS Smith finds 59 percent of U.S. consumers believe disposal instructions on items are hard to find, and 63 percent would be more likely to purchase products with well-marked recycling directions.

On the positive side, the survey found 78 percent saying they believe their recycling efforts are helping the environment, with 72 percent having access to at-home or curbside recycling. Yet 62 percent agree there’s a lot of conflicting advice on recycling.

The survey comes amid heightened eco-consciousness due to climate change as well as other surveys showing confusion about recycling guidelines.

A study released last fall by the Paper and Packaging Board (P+PB) found 95 percent of Americans saying they recycle, but only 34 percent said they recycle frequently and fewer than half know the basics of recycling, such as how boxes should be cleaned out and broken down for pick-up. A Consumer Brands Association report last year asserted the confusion has led to “a broken recycling system in America.”

The “Chasing Arrows” recycling symbol on a product means it can be recycled. However, environmentalists have long complained the symbol is often misleading, and many non-recyclables wind up contaminating entire batches in America’s single-stream recycling system. According to the National Waste & Recycling Association trade group, about 25 percent of the recycle bin cannot be recycled because they’re contaminated with food waste and nonrecyclable materials.

Last fall, California passed a “Truth in Labeling” bill that severely restricted what items could use the recycling label.

Researchers from the University of Exeter and the University of Queensland suggest that rather than “yes-no” recycling labels, a “sustainability scale” could better measure recyclability rates while weighing factors such as the environmental cost of production and potential human health risks from additives.

Requiring packaging to carry region-specific directions for disposal would shift responsibility away from consumers and towards regulators and plastic producers, researchers argue. Lead author Stephen Burrows said in a statement, “This is vital because the mix of plastic products is so complex and confusing, industry must be responsible for clear, accurate and accessible instructions on how best to dispose of plastic items.”

DISCUSSION QUESTIONS: Would more detailed instructions on packaging help improve recycling rates in the U.S. or will other steps be necessary to make meaningful progress? Why is recycling still so confusing to so many?

Please practice The RetailWire Golden Rule when submitting your comments.
Braintrust
"Recycling in America is broken. My recommendation -- send our industry groups over to Europe for study purposes."

"It’s a problem that needs addressing at all levels of society – education, municipal policies, etc."

"One size does not fit most. Part of the challenge is variations in local recycling policies."

16 Comments on "Can retail teach America how to recycle better?"

The sad truth is that much of what goes into the “recycling” bin still ends up in landfills. This isn’t consumers’ fault. Part of the problem has been with how loose or vague recycling instructions have been, so unwitting consumers who think they are doing the right thing are actually not. I do believe that the onus needs to be on the manufacturer to provide clear instructions for how and if materials can be recycled but, as noted in the article, this can be very challenging given the complexity of materials and how they need to be handled.

One size does not fit most. Part of the challenge is variations in local recycling policies. Because of this, broad instructions will have some challenges. Customers will need to be educated locally first, but retail can certainly help lead the way. The How2Recycle program helps, but customers are lazy. Making this more accessible and a common resource would help. Awareness is key.

Clear labeling is important, but recycling – as this article notes – is a complex issue. Mixed materials in packaging mean that it is sometimes far from obvious as to how items should be disposed. The best way to increase recycling is to ensure it is easy. That means having separate containers for collection or disposal and saying put all cans in one, all plastic in another and all card/paper in another (or whatever). If you don’t make it super simple, a majority of consumers will avoid making the effort.

A very important issue, however the problem is far from being solved. The general public will have to put in the effort, but will they?

Recycling in this country is definitely broken. It would benefit everyone if every entity in the supply chain found more ways to educate and inform consumers on how to recycle and whether each product is in fact recyclable (and in what condition). We simply have to do better.

Recycling is confusing because recycling parameters and practices vary widely by region. Education is also needed and more detailed (and prominent) instructions on packaging are steps in the right direction.

I’m a bit surprised at just how complicated it can be to figure out what is or is not recyclable. I spend a lot of time looking for the right numbers in the triangles on plastic, what cardboard is OK and what isn’t. I don’t blame consumers for this however, I blame the folks who design and create the packaging. If there were some enforced consensus on what appropriate packaging is, and what materials could be used, I think we would create a much easier system for sorting or drastically reduce items that can’t be recycled.

Recycling in America is broken. My recommendation — send our industry groups over to Europe for study purposes. I bet they’ll come away with pages of notes on how the average American can do a better job of recycling one’s waste.

As many others have stated, recycling is indeed broken in America. Even well-intentioned people can often struggle to understand what goes in the trash and what goes in the recycler. It’s a problem that needs addressing at all levels of society – education, municipal policies, etc. Retailers can help though. To start with, retailers can own their private label packaging 100 percent and can choose to use more compostable, recyclable materials while also providing better instructions. They also own their operational procedures and can choose to not individually wrap every single apple, kiwi and cucumber in a plastic bag when putting together a curbside order (I hate this and it is a waste of materials and labor.) They can create “refill” policies for certain items like beer growlers. They also control their pricing and promotions and can use those levers to increase their mix of more sustainable brands or ones with better recycling messaging. Finally, they can offer the very simple service of providing recycling bins for things that people are unsure of like lightbulbs… Read more »
1
|
0
-   Share

Unfortunately most people, when it comes to recycling, simply want the used container out of their homes with the least effort possible. They may be willing to rinse out the milk jug but they’re less willing to wash out the inside of a plastic container that held a microwaveable side dish or entrée. They have never been taught how to break down that Amazon box (a skill set I learned in a supermarket many years ago).

However I do believe more detailed instructions will help. For example, can the packaging inside a cereal box be recycled? If so, does it go with the plastic bags you take back to the supermarket or in the recycle container for pickup? It also might help if the packages’ recycling instructions were made more prominent on the container.

I hardly think longer descriptions are the solution to this issue. If a.) consumers aren’t recycling or b.) products can’t be recycled due to food residues, then we are solving the wrong problem. And the solution is not lengthy instructions. It’s brands such as Grove that are completely plastic free. Or it’s regulatory and private investment in making things easier to recycle.

We either need bigger incentives than recycling to bridge the consumer aspiration gap, or to take the onus off the consumer.

Putting detailed instructions on the packaging can’t hurt. First, printing the instructions on the side of a box that might already have branding doesn’t cost anything. Second, it sends a message to the consumer that the company cares, and that’s important to many consumers. Third, even if the instructions caused just 1 or 2 percent of customers to recycle, you have a nice “win.”

We need single-stream recycling facilities that can accommodate automated sorting. But even with proper recycling efforts and processing, food contamination is a problem. I do agree, however, that more simple and clear messaging on both containers and packaging can help. Finding the right receptacle is like a game show, so let’s start with those.

This is such a tragedy and the industry and the consumer need to do more. Amazon needs to do more. They could and should lead this effort and provide the means to do so. Amazon boxes that show up on our doorsteps are recycled by some but not by all. Think of the number of boxes each and every day across America! Amazon should spend a fraction of what it earns each and every day on working with the industry to develop clear instructions for consumers to understand.

Amazon boxes can be used to deliver these instructions on all their boxes instead of always promoting themselves. They can be used to educate the consumer on all kinds of packaging and not just their own. The industry needs to do more to change their packaging so that it is easier to recycle and yes, the consumer needs to do more and not sit on the sidelines of this critically important issue.

Recycling is unnecessarily frustrating for shoppers for several reasons. Different or vague rules for different plastics or types of paper is a big one. Caps on your containers or not? Some municipalities recycle glass while others who found it uneconomical no longer accept it. When the guidance is inconsistent (or even unstated!) consumers’ best impulses are defeated. This is not a problem caused by manufacturers or major shippers like Amazon, but they can take steps to at least reduce the volume of waste packaging materials.

I don’t feel any type of regulations can actually solve recycling rates or sustainability issues at large. Market players and shoppers will anyhow either find workarounds or simply ignore and leave. Remember California’s car emissions program, wherein all automobile manufacturers were required to ensure a mileage of 35.5 miles per gallon for heavy vehicles? Unfortunately, carmakers started manufacturing two cars simultaneously: one that matches emission standards and one that costs less, thereby making the motive behind sustainability programs void ab initio. I, therefore, believe that recycling initiatives be a people’s movement and let the industry respond. Shoppers can force retailers to follow sustainability standards and retailers on the other hand should convince and inspire their customers to pursue sustainable products. I also feel that recycling is indeed a complex process. When buying a product that has a paper box packaging with plastic stickers on it, I am not sure whether to treat it as a biodegradable paper product or a non-biodegradable plastic product. Treating it in the wrong way will collapse the entire purpose of… Read more »
1
|
0
-   Share

Braintrust
"Recycling in America is broken. My recommendation -- send our industry groups over to Europe for study purposes."

"It’s a problem that needs addressing at all levels of society – education, municipal policies, etc."

"One size does not fit most. Part of the challenge is variations in local recycling policies."