Costco makes everybody mask up 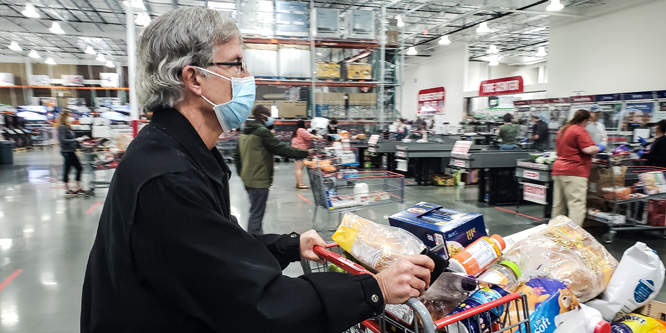 Costco, among the first retailers to require face masks upon entry in early May, has taken its restrictions a step further by mandating that customers with medical mask exemptions wear face shields.

The requirement applies to employees, as well. The only exception to the rule now is for children under the age of two. The changes come amid spikes in coronavirus cases across the U.S., which has seen the numbers of infected grow by more than 100,000 new cases per day for 12 straight days. Hospitalizations are at their highest point since the pandemic hit the U.S. earlier this year, and deaths are rising sharply, as well.

“This updated policy may seem inconvenient to some, however we believe the added safety is worth any inconvenience,” said Craig Jelinek, Costco’s president and CEO, in a letter to customers.

Those unable to wear a mask or face covering were encouraged to use Costco’s online delivery options.

Earlier last week, the U.S. Centers for Disease Control and Prevention strengthened its mask recommendation, saying studies show they protect the wearer too. Previously, masks had been promoted more as a way to protect others.

Costco has faced confrontations from customers unwilling to comply with the company’s policy or exploiting the medical exemption clause although in-store incidents appear to have lessened in recent months.

On its fourth-quarter conference call on September 24, Richard Galanti, EVP and CFO, said shoppers appear “a little more comfortable” with the restrictions. He said, “We believe they feel safe, given the safety protocols and the mask requirements, the sheer size of the building itself and the width of the aisles.”

A HealthDay/Harris poll taken in early October found 93 percent of Americans indicating they sometimes, often or always wear a mask or face covering when they leave their home and are unable to socially distance, including 72 percent always doing so. In August, 90 percent sometimes, often or always were found to wear one, and 61 percent always did.

Costco’s tighter guidelines may be seen as unfair to those with actual medical conditions, and masks remain a political hot potato. Many Republican leaders have indicated they would oppose a call from President-elect Joe Biden’s for a national mandate, seeing mask wearing as a personal choice. HealthDay/Harris’ study found women, older adults and Democrats more likely than their respective counterparts to wear a mask more frequently.

DISCUSSION QUESTIONS: Do you agree with Costco’s move to require customers with medical mask exemptions to wear face shields? Do you see mask requirements becoming less or more of an issue for American shoppers in the months ahead?

Please practice The RetailWire Golden Rule when submitting your comments.
Braintrust
"If you cannot or won’t wear a mask, there are other options for you like curbside pickup or home delivery where you are able to get the things you need. "

"I can’t imagine a rational argument against this action."

"I’d be more optimistic if this were purely a matter of public health, but it seems to be a fairly large battle in the culture wars and that is far more problematic."

37 Comments on "Costco makes everybody mask up"

Yes, I agree with Costco’s move – perhaps some shoppers have heard that there’s a pandemic running out of control? With the news of vaccines on the horizon, I understand that it would be easy to let our guards down, but this is far from over. I think Costco is right to require masks and, as always, if shoppers don’t agree they can shop elsewhere. Safety of employees and shoppers must always come first.

I agree 100 percent. If you cannot or won’t wear a mask, there are other options for you like curbside pickup or home delivery where you are able to get the things you need. Sadly we are living with the consequences of people ignoring health mandates from the medical experts.

Costco’s move to require customers with medical exemptions to wear face shields is a responsible decision. Some of the customers with medical exemptions may actually be compromised and need protection more than others. The pandemic is getting out of control and now is the time to rein it in. Mask mandates and stricter social distancing policies by states will become greater in the next few months and we have no choice. It is the right thing to do. It will be hard on retailers and restaurateurs but it will save lives.

Given the spike in cases, it makes sense to keep everyone safe. I have sympathy for anyone with a genuine medical condition that prevents them from wearing a mask, but given where we are with the pandemic it is just too dangerous for those individuals and others around them.

No shirt, no shoes, no mask, no service. I understand that there are people with breathing issues who genuinely cannot wear a mask, but I think there are far more who just can’t be bothered to wear one. These are the people who are the problem.

Thank you Costco for taking a stand to keep your employees and customers as safe as possible. Here’s hoping other retailers follow suit.

And folks with breathing issues severe enough that they cannot wear a mask should not be out in public in the midst of a highly infectious respiratory/vascular viral pandemic, period. That’s where online, delivery services, and proxy shopping are literal life-savers.

It makes a lot of sense and I don’t see mask requirements being lessened or removed anytime soon – I suspect they will be around for a very, very long time, even after a vaccine is implemented.

Totally onside with Costco. Yes, I do feel for those with medical conditions. But the reality is that there are many who still believe they have the right to put others at risk. This closes the loophole. Mask up everyone — we’re on the right track.

Frankly, I cannot comprehend anyone being against this mandate. It’s not like it is self-serving for Costco, it’s for all of us. I can’t imagine a rational argument against this action.

It’s a shame that masks have become a symbol of political preferences and the U.S. as a whole is not able to have a consistent protocol.

As a private business, Costco has every right to mandate what it thinks is right for its customers and employees. Given the fresh wave of infections, it seems appropriate.

Definitely. They have to try to protect their employees and all their customers. It’s that simple. If a customer cannot comply, he/she can send a proxy to do their shopping. It really is that simple.

The U.S. is now experiencing another million COVID-19 cases every TEN DAYS. his exponential spread threatens our economy and our national security. Surely asking people to protect themselves and others is a good idea.

Good for Costco! Wearing a mask is a simple act that helps mitigate the spread of the coronavirus. And with the explosion that we are experiencing, it’s odd that this is a contentious question. We can’t seem to get the simple stuff done, and while we applaud all the news about vaccines, there is a large number of people that won’t do that either. I hope and expect other large businesses and institutions to take a similar stand, if only to protect their own employees.

Good for Costco for setting the right example. Safety and health is first, and if that means wearing a mask or shield, then so be it. Customers still have a choice. They don’t have to shop at Costco. I’m sure that’s not what Costco wants, but they are putting the majority of their customers/members health above the small percentage of people who disagree with their mask policy.

…face shield? I was in a grocery store last night where the employee wore a face shield while checking me out. When she moved her head, looked down, bagged my items, based on the angle of her face and angle of the shield, I think her breathing was going straight to my items or onto the counter unobstructed by anything.

I am not really sure these face shields accomplish the same thing as a mask. Even of someone coughs or sneezes with the face shield on it seems like there is a lot of space for those germs to get spread around vs. the mask that appears to have far less space for stuff to go out. Early in the pandemic I was thinking of using a face shield instead of a mask because it appears more comfortable in some ways, but I am not really sure it provides the same level of protection as a mask.

175,000 new cases in this country every day, and the number is rising. It is long, long past time to get serious about this pandemic and do everything we can to slow the spread. Measures like the new mask mandate from Costco set an excellent example for other retailers to follow and represent a small but important step in the right direction. Retailers, please take note!

Our governor is sending out his stormtroopers to make sure everyone in retail is wearing masks, and that includes the customers. They will still put the burden on us for customers who refuse, and in my case there are some who conceal carry — that can make confrontation kind of scary. I passed out masks to some yesterday, and when they left the store they threw the masks on the ground and flipped off my cashiers. What a scenario we have to deal with, and our country remains deeply divided with no end in sight. Medicare is about 15 months away and I’m looking forward to my options. We will see what happens.

Tony, I sympathize with your challenges actually operating a store these days — but when you refer to your governor’s “stormtroopers,” you might consider why this kind of rhetoric causes our country to be “deeply divided with no end in sight.” The original stormtroopers were out of Nazi Germany (not Star Wars), and these metaphors are never helpful coming from either side of the political aisle.

I know what I wrote, and you can think what you like, but it is frustrating dealing with the mandates, without the harassment from the state officials shutting down businesses for things that are out of my control.

Far different from calling them “stormtroopers,” thank you.

You can log the date/time of each customer who enters without a mask and you told to wear a mask but they wouldn’t do it. If you can use the security footage to prove the interaction that will build your case further. At least that way you will have a record of attempting to enforce the rule if an inspector shows up and finds those who refuse to wear a mask in your store and then tries to issue a fine.

Interesting behavior, as people are very compliant in the West.