Do retailers have the right stuff for Christmas? 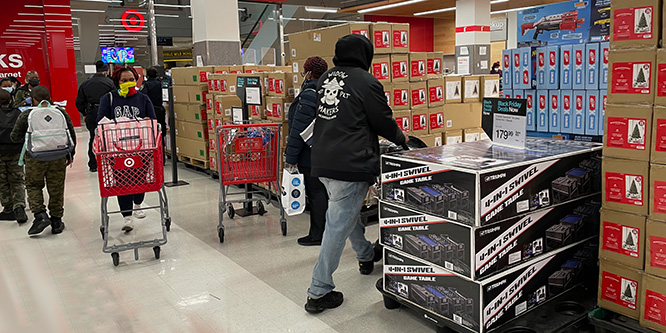 New research forecasts that imports to American ports will fall to the lowest level in nearly two years by the end of 2022.

The final numbers are not yet in for September but those are expected to report a three percent year-over-year drop. NRF is forecasting imports to fall 4.9 percent in November and 6.1 percent in December. The December forecast, if correct, would represent the lowest level of TEUs since February 2021.

“The holiday season has already started for some shoppers and, thanks to pre-planning, retailers have plenty of merchandise on hand to meet demand,” NRF vice president for supply chain and customs policy Jonathan Gold said in a statement. “Many retailers brought in merchandise early this year to beat rising inflation and ongoing supply chain disruption issues.”

“The growth in U.S. import volume has run out of steam, especially for cargo from Asia,” Hackett Associates founder Ben Hackett said. “Recent cuts in carriers’ shipping capacity reflect falling demand for merchandise from well-stocked retailers even as consumers continue to spend. Meanwhile, the closure of factories during China’s October Golden Week holiday along with the Chinese government’s continuing ‘Zero Covid’ policy have impacted production, reducing demand for shipping capacity from that side of the Pacific as well.”

Some of what’s going on at retail could be attributed to retailers thinking ahead to avoid getting stuck without inventory for the holidays, but that’s not the full story. Many are sitting on merchandise that they chose to pack-and-hold during the pandemic and are now looking to turn. Others placed big orders early on with the expectations that consumers would continue high levels of discretionary spending despite rising prices.

The Washington Post, citing Census Bureau data, reports that U.S. retailers’ inventory levels were at a record $732 billion in July. That’s a 21 percent jump from the year prior.

Retailers, including Amazon.com, Target and Walmart, all with their own excess inventory issues, are running Christmas sales promotions this month in an effort to get a head start on the holidays and also bring their stock into a state of equilibrium with demand.

DISCUSSION QUESTIONS: How do you explain the forecasted drop in imports at the nation’s ports? Do retailers have the right inventory in their stores and warehouses for the holiday season?

Please practice The RetailWire Golden Rule when submitting your comments.
Braintrust
"Based on the magnitude and breadth of reported overstocks, these small drops in imports sound totally appropriate and healthy."

12 Comments on "Do retailers have the right stuff for Christmas?"

One of the biggest issues in retail right now is chains having far too much stuff, not too little. That, along with a general softening of retail volumes in some categories, means retailers are ordering less product. That alone accounts for some of the drop in imports. On top of this, retailers got holiday inventory in early to avoid the problems of last year.

The drop in imports is related to the over-buying that happened at the height of the supply-chain disruptions. Some retailers have too much inventory, and others may be running lean based on these earlier decisions that they made. This holiday season is going to be hit-or-miss across the board. Consumers should shop early and buy it if they see something they want, since it may not be available if they wait.

Based on the magnitude and breadth of reported overstocks, these small drops in imports sound totally appropriate and healthy. It means inventories have a shot at normalizing during Spring 2023. Maybe. Hopefully.

The drop in imports is a good sign because it indicates retailers are attempting to level out their inventory. For the last few months, there’s been so much excess that they’ve had to clear in ways that are negative to the balance sheet. This is a good thing, especially as demand slows overall due to inflation.

Your question is indeed a complex one, George.

Do retailers have the RIGHT inventory? I think not. This is going to be a challenging holiday season with many markdowns, disenchanted shoppers, and a lot of leftover inventory going into the new year.

With all we have recently discussed regarding retailers being massively over-inventoried, why shouldn’t we expect imports to drop to the same degree?

I just had dinner with a big group of retailers in NYC and they agreed that now is the time to “downsize our effing inventory.” Christmas sales should be a revelation.

The same question has been (or should have been) asked repeatedly for the last six months in every retailer’s board room. The question hinges on the words “right inventory.” The lower level of shipments, the previously unheard-of long lead times on almost anything electronic, and the notable overstock position of many retailers indicates that many retailers will have lots of inventory that they will be marking down for the holiday season because it is in the wrong season. There will be lots of bargains to be had. However it might be the fall sweater you are forced to buy instead of the cool new electronic gadget.

The answer to the question of if the retailer has the right inventory is dependent on the retailer. It is contingent on several factors including both the amount of inventory and what the inventory consists of, i.e. how much is pack and hold and how much is new.

The significant downstream impacts of being over-inventoried with contingency stock due to the post-pandemic effects and global supply chain disruptions have led to retailers having far too much stock. While retailers have taken an increasingly proactive stance on promotional holiday planning, there is an excess inventory in the market. Due to the significant lead times, it has proven to be challenging to bring in seasonal and trending items.

Additionally, the general depreciation of consumer confidence, inflationary impacts, organizations restructuring/layoffs, supply chain disruptions, and the ongoing war in Ukraine has contributed to a sense of uncertainty heading into this holiday season. Global macro-level disruptions may just become the new normal. It will require retailers to pivot to more agile, product-centric ways of working with prescriptive merchandising, assortment planning, pricing, and promotional strategies.

We will never indeed return to the ways of working, shopping, and living before the pandemic. The new norm is full of uncertainty and global disruptions that require agility and flexibility.

The bubble of backlogged orders needs to be cleared before smart retailers would order additional items. Given the uncertainties, retailers can’t afford to over order new items for this holiday with the amount of previously ordered items still arriving or sitting in warehouses already from last season.

Interest rates on mortgage loans have dramatically climbed because of the prevailing inflation. Therefore, customers have cut back on their purchases of discretionary items in order to manage their finances. Inventory planning by merchants has also been impacted by the change in demand levels. As a result, a lot of retailers are burdened by excess inventory and are currently rethinking their purchase cycles. This, in my opinion, is a significant factor in the fall in imports.

Braintrust
"Based on the magnitude and breadth of reported overstocks, these small drops in imports sound totally appropriate and healthy."