Does Dick’s Sporting Goods need to hunt for customers? 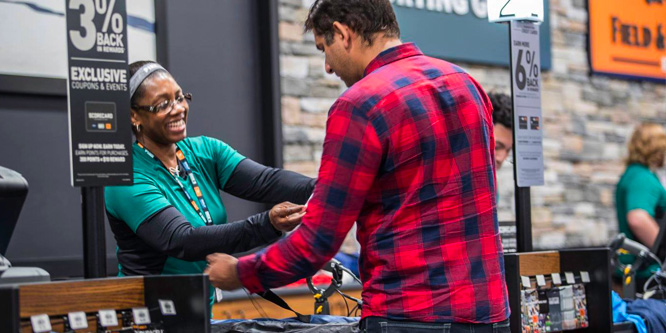 Dick’s Sporting Goods, which earned national headlines in February 2018 for its decision to end sales of assault rifles, last week announced plans to remove the hunting department from another 440 doors. Once removed, the category will be in only 12 percent of its locations, most located in rural areas.

The retailer also previously banned the sale of guns to people younger than 21. The decision followed the school shooting in Parkland, FL. AR-15 and other high-capacity magazines at the time were only being sold at its smaller Field & Stream banner. Dick’s banned them from its signature boxes in 2012 following the Sandy Hook massacre.

The decision, along with gun-control lobbying by Dick’s CEO Ed Stack and the destruction of $5 million in inventory as a message that such weapons should be outlawed, drew the ire of the National Rifle Association (NRA) and boycott threats from the hunting community.

Pulling the overall hunting category, which also includes a wide array of archery and hunt-related apparel, footwear and accessories, was a business decision, Mr. Stack told analysts on his company’s fourth-quarter conference call.

Hunting was “probably the lowest turning, lowest margin category we have,” said Mr. Stack. The category also “declined significantly over the last couple of years,” although that’s because the arrival of a Republican presidential administration reduced panic-driven purchases as gun legislation became less of a concern. Sales soared during the Obama administration and often spiked after shooting incidents.

Dick’s had tested the removal of the category from 135 stores and found the stores generally comped above the company average while offering significantly higher margins. The hunting category was replaced by better sellers in each region.

On its conference call, several analysts still expressed concerns about Dick’s revised mix with one wondering if Dick’s will look too much like a department store. Beyond apparel and footwear categories, the CEO saw opportunities to better reach the “female athlete” and expand golf and team sports such as soccer. “I don’t think there will be any confusion that we are in the sports and fitness business as opposed to a department store,” said Mr. Stack.

DISCUSSION QUESTIONS: Does Dick’s make a solid business case for getting out of the hunting category? Are sporting goods stores the right environments for gun sales?

Please practice The RetailWire Golden Rule when submitting your comments.
Braintrust
"Dick’s is pivoting away from this category, full stop. Their business results suggest this is the right direction, and I suspect that time will validate the decision."

"Not at all surprised by this. Sales of guns, ammo and hunting/shooting supplies have been moving online to sites like CheaperThanDirt.com for years."

"It appears that Dick’s decision to pull guns and eliminate the hunting department in almost all the stores was more business-related than to please the activists. "

13 Comments on "Does Dick’s Sporting Goods need to hunt for customers?"

If the hunting category was the “lowest-turning, lowest-margin category,” then getting out of it makes good sense. It also gives Dick’s the ability to stand for – or against – something, while not trying to cater to everyone. Consumers increasingly want businesses to make a stand for social causes, and Dick’s is doing just that.

Let’s start from “it was the slowest moving, lowest margin products.” Hunting is a dying business. I had a client in Grand Rapids tell me they used to close all the schools at the start of hunting season but haven’t done that in years. Socially conscious retailers are being rewarded, e.g., compare Dick’s to Modell’s.

Dick’s is doubling-down on their decision to remove guns, and I believe management is making the right call. As noted in the article, the gun category was not performing well financially, however, this was more than just about the financial performance. Dick’s is pivoting away from this category, full stop. Their business results suggest this is the right direction, and I suspect that time will validate the decision.

Comping above average with significantly higher margins is a pretty solid business case. And politics aside, hunting strikes me as a category that is easily regionalized to those areas that skew to that customer and pastime. If there is a “best use of space” case to be made for other categories in most stores, then catering to local demographics is a sensible business case.

It appears that Dick’s decision to pull guns and eliminate the hunting department in almost all the stores was more business-related than to please the activists. A business has to make money, and if sales and profit margins are not healthy, any smart business person is going to cut back or eliminate the category. What is getting the attention is the fact that we’re talking guns, and many people in this country support guns, the 2nd amendment, and their right to have a weapon? I do not own a gun, have never fired a gun, and have no interest in purchasing a gun. So the publicity Dick’s is getting can be misleading, but there’s nothing wrong with positive press. I’m sure the anti-gun folks are happy with the decision, and as for the gun enthusiasts, they weren’t doing much shopping for guns at Dick’s anyway, so very few sales will be lost.

Demographic shifts and political coverage made guns and hunting less appealing as a category and may even be dissuading certain types of consumers from shopping there. Margins being less makes the decision easier. Hunting and guns have become highly niche categories with plenty of online communities, and Dick’s can no longer provide for this audience in a physical retail setting.

If the department is not doing well and they have not seen a large decrease in sales or margins from those stores that no longer have hunting departments, why shouldn’t they get out of that business? Not only is it a good business decision but also a morally and socially conscious decision.

Not at all surprised by this. Sales of guns, ammo and hunting/shooting supplies have been moving online to sites like CheaperThanDirt.com for years. I’m a pretty avid shooter (target, trap and skeet) and I can’t remember the last time I bought ammo, clays or targets from a physical store, but it has to be at least four or five years. NJ doesn’t allow online gun purchases except through a Federal Firearms License holder, or I’d buy any new gun that way too.

When the word “GUN” comes up, everything rolls to political. Even in this case, in which the decision is a solid business decision.

“Are sporting goods stores the right environments for gun sales?” Hunting is a sport. So why shouldn’t they if it is a good business decision? Again, the problem is political. Those supporting “GUNS” object to the limitation for only hunting. Those who are anti-gun put all weapons in the same basket. Sadly, in neither case are the positions reasonable.

Dick’s decision to remove guns was based on several factors but it was good category management. The category was under performing and occupying space that could be, and was, reallocated to faster selling higher margin items. The result was a higher rate of inventory return.

Hunting and fishing remain popular in the U.S., and for some these pursuits are a significant source of food.

Guns have always had a thin margin no matter the retailer. It’s the accessories and apparel that keep sporting goods stores afloat. However, Dick’s was never a destination for these types of purchases. It’s a no-brainer.

Hunting and fishing licenses (and snowmobile licenses and cross-country ski passes) have been falling steadily here in the Northland, as have the populations of rural communities. Property pricing has moved out of reach for middle-income folks in the cities, so the 1950s-1970s model of having a cabin “Up North” to take summer vacations and long weekends at has evaporated. Only the wealthy can afford to keep a second home, and they don’t want their privacy and quiet interrupted….

Dick’s decision is as much a business decision (backing away from a low-margin category) as it is a public statement about the gun control issue. It doesn’t matter if you are for or against gun control, Dick’s has made its position clear. That will attract some customers, repel others and many won’t care. But Dick’s does care, and they have shared their position on the retail floor.

Braintrust
"Dick’s is pivoting away from this category, full stop. Their business results suggest this is the right direction, and I suspect that time will validate the decision."

"Not at all surprised by this. Sales of guns, ammo and hunting/shooting supplies have been moving online to sites like CheaperThanDirt.com for years."

"It appears that Dick’s decision to pull guns and eliminate the hunting department in almost all the stores was more business-related than to please the activists. "