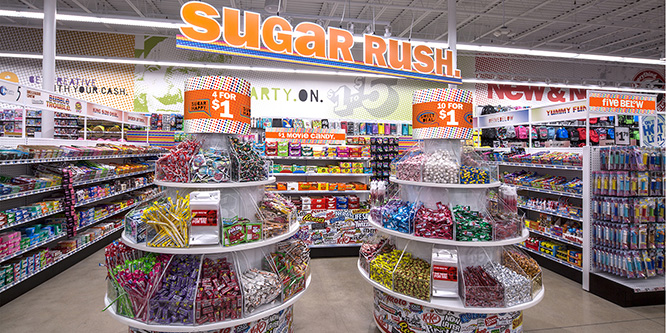 “I think that is really at the heart of what makes this concept so unique,” said Mr. Anderson.

The eight categories give Five Below’s merchants broad flexibility to aggressively invest in new trends as they arrive. Mr. Anderson said, “There’s very few retailers that can go at that breadth of a trend. And that’s what’s really helped us continue to grow this business.”

“We’re not category constrained like those other category killers,” said Michael Romanko, chief merchandising officer. “In fact, we’re just the opposite. It’s our eight worlds that remain relevant.”

Mr. Romanko said Five Below is determined to be “the number one choice for teens and tweens” and the “eight worlds” merchandising approach extends Five Below’s reach to “celebrate the rituals of life and milestones of growing up.”

This includes providing the blankets, pillows and wall décor to personalize that first room, a “blinged-out” steering wheel for that first car, and the toys, bowls and bandanas for that first dog. The retailer is piloting ear piercing at 150 of its 1,200 stores.

Five Below also leaves room to highlight “disruptive product at extreme value,” such as Squishmallows, Toxic Waste Slime Licker and sensory toys. Said Mr. Romanko, “We love them all because they expose us to more customers who then love the brand.”

Mr. Anderson also said Five Below stands out for its supply chain infrastructure that “drives speed, visibility and efficiency,” and in-store experience, which he described as “executing amazing fun every day.”

At the Investor Day, Five Below set a “triple-double” goal to double sales and more than double earnings by 2025 while tripling its store base to 3,500 stores by 2030. A larger prototype featuring “Five Beyond” in-store shops with products above $5.00 is expected to support the growth.

In the near-term, inflationary pressures are seen as a benefit. Mr. Anderson added, “As consumer looks for value, that’s a real opportunity for us.”

DISCUSSION QUESTIONS: Is Five Below’s “eight worlds” merchandising approach the key to its success? What do you think of Five Below’s goal to triple its store base by 2030?

Please practice The RetailWire Golden Rule when submitting your comments.
Braintrust
"'Eight worlds' is a colorful way to describe the power of category diversification."

I’m not sure these eight worlds are the key to success, but it’s undeniable that it’s worked well for Five Below. Retail success can be fleeting, so I can understand the drive to expand while the business has strong demand to support it. That said, I do wonder about the long-term sustainability of a retail operation that peddles cheap stuff to young people. The chain is reliant on a large supply of cheap goods to continue to support its growth, and I wonder how supply chain and access to these types of goods in the long term play out as relations with China continue to be complicated by geopolitical affairs.

Unlike many dollar stores, Five Below is fun – which is appealing to a younger audience. Stores are bright and cheerful and they are crammed full of interesting things to look at, with lots of newness on a regular basis. The “eight worlds” concept makes stores easy to navigate and is based on the various activities younger shoppers engage in. There is an opportunity for Five Below to expand physically, mainly because there are so many locations where it is not represented.

I’d never second-guess Five Below, which knows its audience well. Stores are bright and well-merchandised too. Success story.

I suppose a CEO has to invent a tale to tell. But this one rings hollow – partly because of the buzzword overload. My guess is they’re stocking the right product mix at the right prices for their customers. Does their specific category organization help? Maybe when shopping. Otherwise, it’s just buying products.

Eights worlds sounds like eight departments — with a broader definition given to department. So a “department store” conceived and executed for the 21st century. With a focus on customer, lifestyle products, and value. Traditional department stores could have built in this range of lifestyle products long ago, and chose not to. Look at the range of products offered by Five Below and Target compared to the typical mall retailer. And then look at who is prospering and who isn’t.

I think Five Below has nailed retailing fundamentals on many levels that go beyond the eight worlds. The newness flow alone will keep customers returning as long as the operation is well run – whether it’s four, eight, or 10 worlds.

I love this company and so do millions who represent every age demographic; especially the younger demographic who will continue to be avid consumers and store cheerleaders to others for many years. What do I think of Five Below’s goal to triple its store base by 2030? I think you can’t shirk your way to greatness. Enough said.

My concern with the Five Below concept is that kids today are incredibly sophisticated and the low quality of most of their merchandise will have them yelling foul well before their teens.

Words matter. And they particularly matter in tactics. This isn’t just eight different departments. It is eight worlds. Would you rather be the buyer or the merchandiser of a “world” or a “department”? On the surface it isn’t a lot different, but in mindset it is “worlds” apart.

Triple the store base by 2030? It sounds like a reasonable objective. If they continue to deliver, customers will be there.

“Eight worlds” is a colorful way to describe the power of category diversification. As Mr. Romanko stated, “We’re not category constrained like those other category killers.” When you throw in the fact that most of Five Below’s “worlds” provide a world of margin, you have a winning concept. Five Below’s intentional allowance for treasure hunt opportunities and its focus on teens and tweens are icing on the cake. There is no reason Five Below can’t triple its store count given that its model nips at the heels of dollar stores.

Success doesn’t happen by accident. Five Below (and other successful retailers) don’t just throw everything they can in the store. Five Below has a plan, and the plan is to stay within the boundaries of the “eight worlds.” Targeting these eight categories allows for focus. As for expansion, the Five Below concept is always important to people who are price sensitive, and even more so when there’s high inflation. At least for the short-term, now is a good opportunity to expand in a price-sensitive economy.

Five Below has done an impressive job in pivoting their merchandising and store presentations to be interesting, and dare we say experiential, in the ultra-competitive dollar store space. Additionally, Five Below has been very opportunistic in leveraging their “eight worlds” of merchandising to fill category voids, especially in the toy sector with the loss of Toys “R” Us. Five Below has invested significantly in knowing their customer and providing price-conscious product offerings for the Gen Z group.

Hey, Five Below is killing it now, so something they are doing is working. I agree with Gene Detroyer that this idea goes way past categories. Sure — they are categories, but they are categories with swagger and imagination. As to store count, it always makes me nervous when CEOs start guessing how many stores a future market will require. We are still coming out of a prime example of why that isn’t always the most prudent course.

Having a focused strategy is really the key. Regardless of if it’s eight worlds or ten, as long as there is clear focus on where they want to dominate provides a distinction to its consumers as a destination. They know they can go to Five Below and find something fun and giftable. Customers think they want choice, but this somewhat narrowed focus is easy to understand. I do anticipate whatever the 8 are will likely evolve, but for now, it’s working.

Braintrust
"'Eight worlds' is a colorful way to describe the power of category diversification."