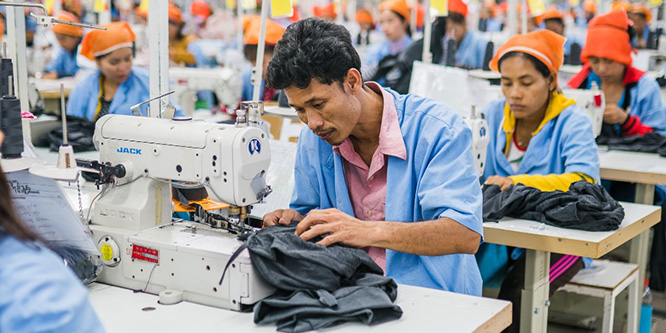 A recent exposé on fast-fashion retailer H&M alleges that the company’s environmental promise is undermined by greenwashing.

H&M was using a scorecard system to inform customers about the environmental soundness of each product, but a report by Quartz claims that more than half of the scorecards portrayed products as being better for the environment than they actually were. The report also found some instances in which H&M’s scorecards allegedly gave information about the sustainability of a product that was completely opposite from the truth.

H&M has removed the scorecards in the wake of Quartz’s report. The scorecards were created based on the Higg Material Sustainability Index (MSI) by the Sustainable Apparel Coalition (SAC). The trade group has paused the use of the consumer-facing transparency scorecards in response to a complaint by the Norwegian Consumer Authority and is reassessing their methodology. (It has not paused the full use of the Higg MSI.)*

H&M’s transgressions may go beyond that, though, with some of the product information shown on Quartz mixing up data — touting products that used 30 percent more water as using 30 percent less water, contradicting the SAC version of the scorecard.

The fast-fashion industry has begun to make changes to its model in response to a perceived emerging customer focus on environmental and sustainability concerns.

Developments in the fast-fashion world, however, have called into question the extent to which customers truly care about the environmental posture of the retailers they patronize.

Most notable is the emergence of Chinese fast fashion app Shein as the most searched for apparel app, and most downloaded app, in the U.S. The $800 billion company has been thriving despite drawing the ire of environmentalists and even competitors like ThredUP.

Shein recently announced a donation of $15 million over three years for a charity in Ghana meant to help those working in the secondhand clothing market in that nation’s capital city, the second largest secondhand market in the world, according to The Guardian. Shein’s announcement was alternately applauded and derided as greenwashing.

*In response to an email from SAC, RetailWire has updated this article to reflect that the trade organization has paused only the customer-facing usage of the scorecards, rather than pausing the use of the Higg MSI as a whole.

DISCUSSION QUESTIONS: What can other chains with an environmental/sustainable promise learn from what H&M is now dealing with? Do you see this controversy having a lasting impact on how the chain is perceived?

Please practice The RetailWire Golden Rule when submitting your comments.
Braintrust
"There is nothing worse for a brand than breaking the brand promise. Claiming to be 'green' is not enough today, consumers are savvy and will demand transparency."

"Hey, thanks H&M for knocking the global trust index down yet a few more points!"

"There is no consistency across what is considered sustainable and how brands are measured. We need a single source of truth."

As the world’s environmental challenges mount, retailers and brands will be scrutinized about their environmental promises and, more importantly, their actions. This is not a problem that is going away. Retailers and brands had better take environmental issues seriously and deliver meaningful outcomes, and not just greenwashing, as so many have done. While the financial calculation of merely greenwashing away environmental issues may seem acceptable, this is a real threat to the long term success of companies like H&M who target a younger consumer. I believe that H&M has already sustained brand damage as a result of their past greenwashing activities.

Saying you’re “green” is a little like saying you’re a “cool” brand. Don’t say it, just do it. We’ll be the judges of those two attributes, thank you.

There is nothing worse for a brand than breaking the brand promise. Claiming to be “green” is not enough today, consumers are savvy and will demand transparency. As retailers race to adhere to ESG practices, they will encounter not only issues with measurement accuracy but with profit compromise. The best first step for every manufacturer/retailer is to establish a more sophisticated end to end supply chain. Having a strong planning, merchandising and allocation system will better ensure that the right amount of products get made and go to the right places to the right consumers. Produce less waste upfront.

Retailers have been greenwashing for years. At least a decade, maybe more. They often mask cost-savings initiatives with “green ones.”

The answer is simple. Get real.

Firms should treat sustainability reporting the same as they do their financial reporting. These data ought to be of high integrity and be able to pass an audit by any third-party accounting firm. Lately there are more firms that are starting to integrate their ESG reporting into their annual financial reports. I expect to see much more of this in the near term. H&M would be well advised to get their house in order or face consumer backlash at the register and on social media.

Brands and retailers need to be transparent with their customers and employees on their current practices. We only know about this H&M transgression because they were exposed and their practices were questioned. We need to push brands to be more transparent in how they are defining sustainability and the industry needs to examine and implement standards that all brands should follow. There is no consistency across what is considered sustainable and how brands are measured. We need a single source of truth.

The industry cannot rely on trade associations as the arbiters of sustainability or eco-impact scoring. Huge conflict of interest, in my opinion. If brands want to avoid more of this kind of investigation in the future, they need to engage directly with organizations exclusively focused on reducing environmental impact and increasing the sustainability and reuse of products. There’s just no other way around it – When it’s not your direct and exclusive focus, it’s too tempting to let some things slide or employ statistics to make things look better than they are, and it’s a slippery slope from there.

On the other hand, I would also note that those organizations that want change from the fashion industry would do well to offer paths forward for companies like H&M – especially after getting caught up in greenwashing accusations. Exposing and vilifying alone is not enough to create the change that consumers increasingly expect. There’s a real opportunity here to offer to be a partner, and for retail brands to take them up on it.

I’m shocked, shocked to see there’s lying going on here! Profit speaks louder than truth, at least for these fast-fashion players. The math is simple: they can’t turn a profit without cheap labor, cheaper materials, and the cheapest excuse for ethics imaginable.

By the way, that’s poorly hidden PR spin from the fast-fashion lobbyists: “called into question the extent to which customers truly care about the environmental posture of the retailers they patronize.” Shoppers have every right to lie to themselves; fast-fashion retailers shouldn’t have the right to lie to everyone else. When corporations lie, they will eventually lose respect, loyalty, and business.

This is going to happen more and more as we collectively arrive at how to consistently measure sustainability in retail. Unfortunately, though, some brands may see this instance as enough to intimidate them into backing off of pursuing their sustainable efforts. We really need retailers to take sustainability seriously and dedicate the appropriate amount of resources to lowering their carbon footprints. This shouldn’t happen.

The apparel industry has a serious problem with environmental and social issues. I think about this a lot, and I like to say that the real issue here is the $5 t-shirt. Consumers want cheap disposable clothes. Shein is an excellent example of that. There are apparel retailers who are making sustainability and social compliance part of their brand. Patagonia comes right to mind, but there are others. But without verifiable transparency, greenwashing will continue to be an issue. Today, many of the metrics retailers are using are self-reported. That’s a big problem. And what about the agents who do much of the sourcing of raw materials and construction for these apparel retailers? How do they monitor compliance? Some massive firms are doing this work for major brands, but when these discussions about accountability come up, they seem to fall under the radar. The only solution, in my opinion, is a fully transparent and verifiable supply chain, from source to rack. This is achievable; technology like RFID, blockchain, and GIS can create this environment. Unfortunately,… Read more »
5
|
0
-   Share

H&M is not the first and will not be the last to be caught in the greenwashing lie. How many times have we talked about this on RetilWire?

Some customers care about the environment and will make decisions accordingly. Some customers do not. But being caught greenwashing sends a message to all customers. “We can’t be trusted.”

A retailer’s credibility is important to all customers, not just those that support environmental actions.

Hey, thanks H&M for knocking the global trust index down yet a few more points! I often wonder how often this same kind of thing happens with products labeled organic. If no one is checking for facts, who would know?

I’m not surprised that this happened, as they are only doing what they feel that they have to do in order to keep profits up. It is NOT okay, and I hope that this bad PR makes others rethink following similar strategies.

If brands and retailers are serious about being environmentally friendly, then that needs to be a part of their DNA. It requires investment — time, money, resources, and acknowledgment that it may impact margins. The greenest companies from my perspective are not low-cost brands, they are brands committed to being green versus appearing green (Allbirds, Patagonia, 7th Generation, etc.).

Brands like H&M rely on constant consumption of fashion. Most consumers recognize this, and if they were truly eco-conscious would likely be shopping elsewhere (thrift store, church rummage sale, or from a clothing brand that creates clothing that will hold up longer over time). As Nikki said, these companies cannot self-police their environmental impact.

When I hear of companies like H&M talk about ESG, I just find it hard to wrap my head around it. Their business model is so antithetical to those types of initiatives. Yes using less water, reducing shipping costs, and removing certain chemicals may make a positive difference, but these are a small fraction of the energy required to be constantly replacing an entire wardrobe.

I don’t really know enough about the H&M’s operations to comment on how credible the report is — would anyone here? — but this seems to be another case of naïveté in retailing: isn’t the whole concept of “fast fashion” antithetical to sustainability … in every way imaginable? (Which I guess would mean the labels should all read “bad,” “worse” or “worst”!)

There is one — and only one — guaranteed public relations strategy: “Do the right thing.”

Lying about sustainability is unbelievably stupid, a fiduciary violation, and possibly fraud. If proven true, H&M leadership should be fired and stripped of their shares.

Braintrust
"There is nothing worse for a brand than breaking the brand promise. Claiming to be 'green' is not enough today, consumers are savvy and will demand transparency."

"Hey, thanks H&M for knocking the global trust index down yet a few more points!"

"There is no consistency across what is considered sustainable and how brands are measured. We need a single source of truth."