How does smartphone shopping differ from laptop shopping? 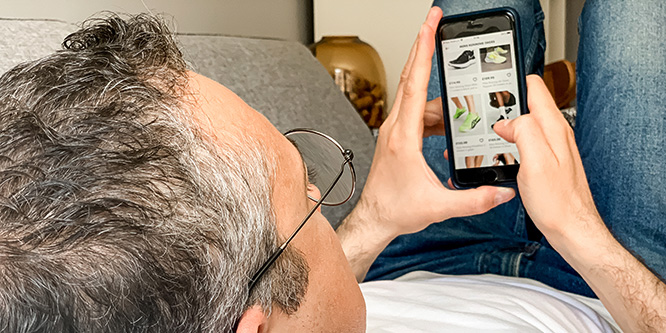 A new university study finds that the intimate nature of a smartphone causes consumers to reflect inward, elevating their preference for unique and self-expressive options while shopping, versus when buying products on a laptop.

The highly private and personalized feelings consumers have toward their phones lead them to reach a psychological state known as “private self-focus,” according to researchers at the University of Florida.

“When you use your phone, your authentic self is being expressed to a greater extent. That affects the options you seek and the attitudes you express,” said Aner Sela, a professor in UFA’s Warrington College of Business, in a statement.

Across five experiments, subjects shopping with their own smartphones were found to prefer more unique items rather than popular ones, as well as more products that they were told had been tailored to their personality than if they used a larger computer or even a borrowed phone.

“With a borrowed phone, it doesn’t feel like you’re in your own little bubble,” Prof. Sela said.

The findings lend credence to efforts by retailers to alter what they offer to consumers depending on what device they are using.

As they have become ubiquitous, mobile phones have been criticized for creating distractions while driving and walking as well as during meals and other everyday conversations. San Diego State University research last year found loneliness among teens around the globe had skyrocketed over the prior decade as increased smartphone usage tended to replace more emotionally-engaged in-person interactions.

Research at the same time has found individuals express their views more freely when using their phones and the mere presence of their device can create a sense of control and comfort. The deep attachment is most evident from the panic that often sets in when an individual breaks or loses their mobile devices.

Kostadin Kushlev, a psychology professor at Georgetown University who has studied the role of digital technology in health and wellbeing, told The Washington Post, “They are very personal devices, more so than any other device, and with us all the time. From that perspective, we see them as an extension of ourselves.”

DISCUSSION QUESTIONS: Does it make sense that making choices using a personal smartphone, compared with a laptop, tends to increase the preference for unique and self-expressive options? Should retailers and direct-to-consumer brands alter what they offer for purchase based on the device being used to shop their websites?

Please practice The RetailWire Golden Rule when submitting your comments.
Braintrust
"Retailers and DTC brands can easily fall into the trap of over analyzing this stuff. "

15 Comments on "How does smartphone shopping differ from laptop shopping?"

I am skeptical. Perhaps because of my shopping habits. I am not interested in unique items. I want the item I want and order it.

Perhaps because my fingers are big and clumsy, shopping on the phone is frustrating.

Perhaps because I want to see all the options splashed across the screen at one time.

Perhaps it is the same phenomenon phrased in different language, but our observation has been that “mobile shopping” is more impulsive in nature. We recommend not only offering different kinds of products geared to mobile shopping, but also changing the nature of the offer and the language and format to more closely reflect that impulse buying behavior.

Spot on Dion! I agree that the convenience of shopping on mobile devices increases impulse shopping. The introduction of the smartphone has spurred retailers to make online shopping mobile friendly and now there is the added nuance of mobile shopping personas that need to be considered when customizing content and messaging.

I find that the form factor of the laptop and desktop are more conducive to online transactions. Smartphones (in my opinion) are more of a convenience to conduct these transactions when not near a full-screen device. Old school?

We sure have a lot of time for goofy surveys, don’t we?

The survey says, “When you use your phone, your authentic self is being expressed to a greater extent.” Well, if that’s true then I am more impulsive than I thought I was (thank you, Amazon) because I use my phone to buy things I need as I think of them. If I wait until I get to my computer I might forget.

I think we all (falsely) believe that what is on our cellphone is private. Of course, we are going to be more cautious when we borrow a friend’s phone, and ordering via computer leaves you open to less privacy, too. I don’t think there are any big ah-ha! moments here. And I don’t think brands should alter what they offer based on device. That’s just going to cheese us off when we can’t easily find what we are looking to buy.

Smartphones are getting bigger and laptops are getting smaller. And then there are tablets. Where do they fit in to this? Retailers and DTC brands can easily fall into the trap of over analyzing this stuff. Some simple A-B testing can quickly tell marketers if specifically targeting smartphone, laptop, or tablet users is worth the resources required.

It’s important to note that the shopping experiences on a phone versus laptop are very different. You can’t open a bunch of tabs on your phone and scroll across them simultaneously with ease like you can on a laptop. You also are often times coming from a social media posts to a mobile purchase, which could very well be a trend buy because of that fact. Overall, I’m not totally sure on this data, but they are definitely disparate UXes.

It’s an interesting topic. For larger, established brands it might be worth experimenting with as more and more consumers shop on mobile apps and via SMS. That said, I’m not sure retailers and brands should be altering what they offer based on what consumers might consider “unusual” or “personal.” Shopping on a mobile device is ideal for quick purchasing decisions like re-upping when you’re running out of something. Or when you’re on the move and you suddenly remember “Hey, I didn’t buy that thing I need!”

To that extent, what retailers and brands should be doing is focusing on making the mobile shopping experience faster, easier, and more rewarding for their customers. Enabling shoppers to browse the options, quickly learn about products, and then buy them in the moment of intent is what will give merchants a leg up here.

This is really interesting. I’m not sure offering alternative products based on the device is necessary, however the messaging and way in which the products are presented should be considered. A picture says a lot, so having a more stylized lifestyle photo as a hero image for mobile versus desktop could be one way to align with consumer sentiments.

The level of engagement on smartphones matters and retailers must adapt to user preferences. Retailers and DTC brands should be measuring how their shoppers engage on their website, mobile or desktop, and adjust to provide the best experience possible.

Psychobabble aside, I would think the main difference would be a laptop — “desktop” is what I would have thought they’d use, but anyway — is really more amenable to research and so, one hopes, “serious” shopping; or to look at from the other direction, mobile is more for spontaneous purchases.

That’s my theory anyway: I can’t guarantee someone doesn’t hit the “purchase now” button on their iPhone when they walk by the Lamborghini dealership.

Smartphone shopping can often be more of an experience than shopping from a laptop that can feel like work, just given the traditional usage of those devices. Consumers “live” on their phones and it is much easier to make impulse purchases in moments of relaxation. Ads, and especially ones that are personalized, hit consumers as they go through their social media, and there can be an attraction and desire to be a part of a community. Major purchases are more likely to be made on a laptop. For example the J.D. Power Appliance Satisfaction Study finds that 59% of appliances purchased online are done through a laptop/desktop computer vs. 35% on a smartphone/app, and 7% on a tablet.

I feel the smartphone is more handy and easy to carry … at the same time, SEO and SEM tracks customer choice and feeds them what they like.

I feel it’s the other way around … in world of AI, behavior is already identified and created via multiple offering of choice, leading to improved impulse buying.

E-commerce is rapidly becoming all about phones rather than laptops if for no other reason than their omni-presence in our lives. People use these mini-computers we call phones less for talking than they do for all the other functions of life. Whether psychology has relevance is hard to say but the point is rapidly becoming moot as the trend continues. The lesson really is that regardless of what you are selling if your website doesn’t render properly on mobile you simply won’t be in the mix for many shoppers.

Braintrust
"Retailers and DTC brands can easily fall into the trap of over analyzing this stuff. "