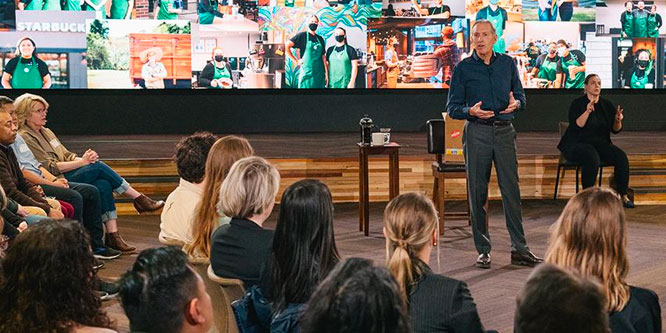 Howard Schultz is looking to play the FOMO card with baristas who are thinking about voting to join the Starbucks United union.

In an online meeting with this week, Mr. Schultz told store leaders that the company was looking at expanding its benefits package to recruit new workers and retain current ones. He also mentioned that unionized stores would not be eligible for these improved benefits since it would be against federal law for Starbucks to unilaterally change union members’ compensation, which can only be done through the organized labor process.

Mr. Schultz said that workers who have voted for union representation didn’t understand this reality or understand how paying dues would affect their income.

The Wall Street Journal, which broke the story, said that Mr. Schultz and Starbucks had not given details on the expanded benefits planned or timing for their implementation.

Cathy Creighton, director of the Cornell University ILR Buffalo Co-Lab and former attorney at the National Labor Relations Board, said that Mr. Schultz was engaged in “a union avoidance technique” and that the company was not legally prevented from asking the union if its members would accept the change in benefits.

Mr. Schultz’s return earlier this month as CEO of Starbucks started off with a letter to stakeholders announcing that the company was  immediately suspending a planned share buyback program to allow it to “invest more profit into our people and our stores — the only way to create long-term value for all stakeholders.”

He pledged to get out in the field and to speak directly with associates to understand their concerns with an eye of improving relations with workers.

The Long Beach Post reported that at least one of those meetings did not go according to plan with baristas saying they felt disrespected by Mr. Schultz.

The workers wrote in a letter to Mr. Schultz, “During the holiday season we were constantly expected to work short staffed which led to closers staying 30 minutes or even hours after their shift ended. Shift supervisors are struggling to fit in their breaks because they don’t want to abandon their baristas. And even as our hours are being cut and our income is being threatened, we show up every day and do our best to provide the Starbucks experience. Yesterday you asked one of us, ‘If you hate Starbucks so much, why don’t you work somewhere else?’ And to that we say, why leave Starbucks when we can make it better.”

DISCUSSION QUESTIONS: Is Starbucks taking the proper approach in its attempt to fend off unionizing activity in the chain’s stores? Do workers have legitimate gripes when it comes to working conditions at the chain?

"I think he’s flying pretty close to the sun on this one, and I’m sure he’s getting legal advice prior to making statements."

"The challenge for employees will be the many tools management will use to limit employee influence after unionization."

This is a very delicate situation. Everything Schultz says or does will be construed as “union busting” by some. If Schultz is going to re-establish great employee relations, he needs to try different things, and there are consequences for those workers who prefer to unionize. The only way Schultz is going to navigate this is if he takes worker complaints/issues seriously, and he appears to be doing that. Whether or not unionized employees feel he is, is an entirely different matter.

I think he’s flying pretty close to the sun on this one, and I’m sure he’s getting legal advice prior to making statements. While I’m sympathetic to anyone working in a short-staffed environment with unplanned time, my family is heavy in the health care space. I can tell you the nursing community would be envious of Starbucks’ staff-challenged working conditions.

It is absolutely the proper approach. Starbucks and Schultz have a lot of positives to show how they think about their workers. Schultz’s move to cancel the buyback is direct proof of what is in his mind. Obviously, Schultz sees labor as an asset rather than an expense.

As I have written previously, I believe the trends experienced in union participation in the last 50 years have not only hurt workers but hurt the economy as a whole. Most companies have not only not been as progressive as Mr. Schultz, but they have treated labor as the enemy and the only option for labor has been to unionize.

The headlines are all about wages, but the reality is worker satisfaction revolves around the entire work experience.

With the acknowledgment of the barista’s letter, surely the next holiday season will see different practices.

Labor unions were born out of the need to protect workers. If Starbucks and Mr. Schultz are improving working conditions and benefits for employees, they will by definition mitigate the need for employees to unionize. Starbucks is absolutely doing the right thing and, given his track record, I wouldn’t bet against the company with this leadership.

Informing workers about what they would forego is a frank dose of realism that employees need to consider as they decide on their union stance. Sticking with the facts in a neutral tone will help Starbucks get its message through, especially to workers who are on the fence.

Understaffed frontlines and burnout have harmed morale. Yet Starbucks seems sincere about improving conditions before any more stores resort to high-stakes labor relations.

Baristas are the secret to Starbucks success. During peak seasons they are often overworked or otherwise uninspired, causing service and satisfaction to dip. Howard has the cachet and track record to fend off unionizing activities if he can clearly articulate his vision AND bring it to life quickly.

The approach of selectively offering benefits to stores that are not unionized is certainly an effort to fend off unionized labor. This is not the only path, but probably one of the more solid ones which can actually work. Unionization can become a burden or in some cases if managed properly a mutual benefit for company and employees. Clearly, the fact that unionization is being considered is enough to give pause to whether conditions or wages are adequate. Employees are not happy, regardless of how fair or compatible their conditions might be. The challenge for employees will be the many tools management will use to limit employee influence after unionization.

The issue is are the demands of these employees realistic?

Next move is you start a franchise program and convert these corporate stores to franchise stores. That means everyone is fired and starts new under the franchisee. Union agreement is gone. The franchisee being a smaller entity will not provide as generous of a wage or benefit package as the corporate Starbucks do. That would be unfortunate as Starbucks has built a strong network of corporate operated stores while other fast food chains have largely franchised everything. The corporate network makes for stronger employee benefits and better consistency.

Biting the hand that feeds you … SB employees are not being subjected to unfair labor practices and certainly not the lowest pay. However, I will surmise a barista’s salary is doubtfully enough to make a living.

Likely not enough to make a living, but similar jobs in this industry that pay less and have few to no benefits are far worse.

Starbucks compensation and benefit package is also more generous than most retailers (looking at department stores and mall stores) for starting level employees.

These jobs seem designed for college students or others looking for part time work, not as a career and not to be relied upon to make a living.

Why attack Starbucks and try to unionize them when there are so many other targets out there that pay so much less and offer fewer benefits?

Unions had their purpose when safety and pay were not covered by law. They have also destroyed whole industries and when the business died or left, destroyed entire communities. From the shipyards in the UK to the auto industry in Detroit, unions don’t benefit the workers or the companies in the long term. The best thing is for both sides to come together naturally and work through a joint plan together. It is in everyone’s best interest.

I don’t think these employees unionizing at Starbucks have a clue what they are even voting for. Starbucks already pays the highest wages and has the best employee benefit package covering the most employees in the fast food industry. What is the union going to bring them? “Improved working conditions?” Go work a shift at any other major fast food chain for a day and come back to Starbucks with no meat grill, no fryer frying chicken and fish, no ice cream machine, no kids play area, and reflect on how the “working conditions” compare between the two then. It seems to me Starbucks has hired some of the wrong employees who don’t even understand what they are getting into with a union or what the union can do for them. Or they think Starbucks makes infinite profits and can somehow afford to get them even better pay and benefits than they already receive. I am hopeful Howard Schultz can turn this around. If he can’t, nobody else can. And if I were him I’d… Read more »
1
|
0
-   Share

"I think he’s flying pretty close to the sun on this one, and I’m sure he’s getting legal advice prior to making statements."

"The challenge for employees will be the many tools management will use to limit employee influence after unionization."