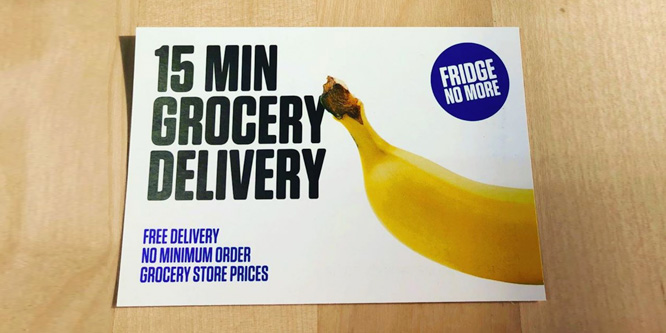 The race for faster delivery was heating up even before the novel coronavirus pandemic and, with the widespread adoption of e-grocery, the ability to get customers the groceries they order, fast, is even more of a priority. Now, a startup in New York City is promising a delivery timeframe on groceries that purports to blow right past the logistics promises of Walmart, Amazon.com and others — and is environmentally friendly, too.

Brooklyn-based delivery startup Fridge No More promises that groceries will be delivered in 15 minutes within a one-mile radius of its storefront, according to Time Out. The startup, which currently has service only in Brooklyn’s Williamsburg neighborhood, delivers via electric bike. Fridge No More plans to expand its operations into Brooklyn’s Park Slope neighborhood this month, and eventually into Manhattan. Customers can order via an app that currently displays a selection of 800 items, but the startup plans to scale the selection up to 3,000 items after setting up a new warehouse-like space.

While the pandemic has made fast grocery delivery a priority everywhere, New York City has long been a battleground for ultra-fast services, with some of the earliest attempts from major retailers beginning in the middle of the 2010s.

NYC was the market where Amazon debuted its Prime Now one-hour delivery service in 2014 before moving into other markets, according to an article from that era on GeekWire.

Later, Amazon folded its Prime Now delivery service into the offering at Whole Foods and expanded the service from New York and other major urban markets to all its stores.

By the end of 2019, this led competitors to roll out comparable services, some even shrinking the promised delivery time window. Kroger, for instance, began piloting a half-hour delivery service in Cincinnati.

The speedy grocery delivery space has not, however, been a smooth ride for all — and there have been some significant failures in the New York market.

Toward the end of 2019, Walmart discontinued its Jet City Grocery fresh food delivery service in the city. The service, which sought to allow customers to order from multiple respected local artisan vendors, ran into frequent out-of-stock issues and operational concerns and was forced to keep raising prices.

DISCUSSION QUESTIONS: Can a delivery-only grocery startup like Fridge No More compete with traditional grocers and third-party delivery services like Instacart and Shipt given the broad adoption e-grocery? Do you think Fridge No More will be able to make good on its claim of 15-minute delivery consistently?

Please practice The RetailWire Golden Rule when submitting your comments.
Braintrust
"This is going to be interesting – can a startup show the pros how to do it? Only time will tell."

This is going to be interesting – can a startup show the pros how to do it? Only time will tell. Have the people in NYC that left to go elsewhere due to pandemic restrictions come back to the city? I think this will also play into the equation.

Color me skeptical about if a.) they can do it in 15 minutes and b.) they can make money doing it.

Consistent 15-minute delivery will simply not be possible. No way!

It will be interesting to see how this scales and also how it actually makes money! I am not entirely convinced that it can do either particularly well.

Small companies tackling big problems is always great to see. Fridge No More will have the first-to-market advantage with this offer but the giants will be fast on their heels. I see Amazon, Walmart and others being able to get to a similar 30-minute micro-fulfillment offering like Freshippo (Alibaba) soon.

15 minutes seems like a difficult brand promise to keep, and the very limited assortment (800 grocery items) is going to be another handicap. As New Yorkers become more willing to venture into their own neighborhood grocery stores, is Fridge No More really scalable when it can only meet that 15-minute window within a mile of its handful of stores? I may be wrong, but I’m a skeptic on this one.

So consumers can place a full grocery order and have it picked, packaged and delivered within 15 minutes? Good luck with that.

I totally agree with you Georganne — but I think their position will be that the clock starts once the groceries are on the bike.

Then what’s the point? If it takes two hours to pick and pack an order, who cares about the 15 minute delivery window?

Some retailer — or maybe it was a hotelier — once said, “The best surprise is no surprise.” When your basic business promise has an asterisk next to it, I’m not impressed.

Well — if they somehow have their website connected to real time inventory, and they only accept orders when they have a delivery biker available, I bet they can. Sometimes it’s a lot easier to pull this off in a one-store chain than it is in a national one. Now Brooklyn on a bike in the winter — that’s a different story.

Essentially what they are building is 7-Elevens for delivery only. And limited delivery at that.

Nice concept, but scaling it will be difficult.

I wouldn’t consider this a competitive advantage if my favorite, trusted grocer can do it within even an hour. Fifteen minutes? For the poor planners of the world? I don’t know — once you get it down to an hour, I don’t think it makes any difference under that.

Scalability will be a substantial issue. The current limitation of a one-mile radius – even in NYC – means dramatic growth to expand to the scale of an Amazon or Walmart. The challenges will become untenable as the organization grows. Assortment size will also contribute to the inability to scale and compete as it expands to 3,000 items. The typical grocery store has over 40,000 SKUs. Fridge No More will need to shift their business dramatically if they want to expand outside of metro areas or expand beyond a one-mile radius. In addition, cart size will be limited to what they can fit on the bikes – much smaller than a typical drive to the grocery store – so it’ll fit more into convenience goods.

All I can say is good luck to these guys. To do this from one location is possible, to manage this through multiple locations profitably and sustainably is going to be very, very difficult. Getting inventory right so customers are not let down, finding locations at a reasonable cost to be able to grow the business and then taking on the might of Amazon and Walmart who are already established in this field is a mammoth task.

I applaud their ambition, I doubt their reality.

This is a race to the bottom. Why do people need to have a 15-minute grocery delivery? When is the insanity going to stop?

This is an intriguing business model, yet at the same time very challenging for Fridge to live up to a 15-minute brand promise. As we have seen, consumers have adapted and are very pleased with a 2-4 hour delivery window.

Building your entire brand promise and differentiation strategy around a 15-minute window, in a congested and dynamic NYC scene, is a race to the bottom.

I’ve been a New Yorker for a very, very long time. I wish this start up good luck.

There is a lot to be said about the city that never sleeps but timeliness is an ambitious promise and a rare attribute found in this city. There is also something to be said about navigating from a local store-front and being in the neighborhood trenches vs traveling to/from a large fulfillment center, but a 15-minute promise is wishful thinking.

I don’t think the Instacarts and Fresh Directs of the world should be worried. The people of Brooklyn, however, may find this entertaining. For about 15 minutes.

Audacious claims are what gets a business attention. Delivering on those claims is how you earn repeat customers or go home early. No one “needs” 15-minute grocery delivery until they do. The app is easy to navigate, and the images are crisp. The cart and payment are straightforward. The prices seem high, but I don’t shop in Brooklyn, so I cannot judge that magnitude.

Bravo for having the fortitude to make the 15-minute claim. My advice, stick to a limited assortment (no need for 3,000 items), do not expand the delivery area, scale only after working out the kinks — from assortment to sourcing and pricing, to driver management and logistics. Apply as much advanced analytics as you can to understand your customers well.

Experts are quick to tell you why your claim is ridiculous or ludicrous, but change only happens by unreasonable minds unsatisfied with the status quo. Fridge No More’s success turns on the ability to execute on its audacious claim. Good luck, and keep pushing!

I might christen this the DARE thread: Just say “no” (to all the questions).

I’ll never wish someone to fail, but when one creates a business plan that almost reads like a parody of everything wrong in retailing it takes quite a bit of self-control. I’ll modify my normal well wishing: I hope no one loses their life savings in this.

Please do a follow up on stories like this in six months? So much noise out there and promise, but we never hear the rest of the story, as Paul Harvey used to say. I have my doubts.

Braintrust
"This is going to be interesting – can a startup show the pros how to do it? Only time will tell."