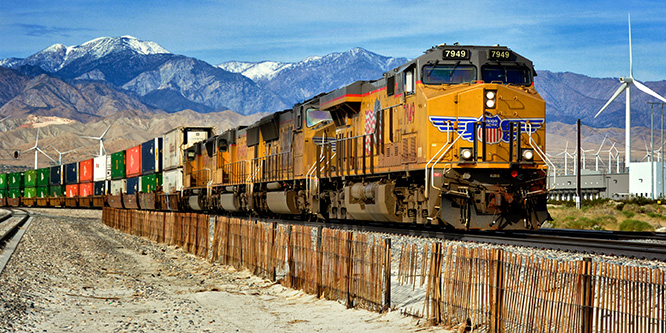 President Joseph Biden last Friday stepped in with an executive order designed to keep freight rail workers from striking over the next 60 days.

Mr. Biden signed the action naming an emergency board of arbitrators that will help resolve disputes between the workers and their employers. The arbitrators have been tasked with coming up with recommendations for the parties to consider in an effort to find a middle ground that will avert a strike or further federal intervention.

President Biden made the decision to sign the executive after being “notified by the National Mediation Board that in its judgment these disputes threaten substantially to interrupt interstate commerce to a degree that would deprive a section of the country of essential transportation service.”

Retailers and their brand suppliers have a vested interest in labor disputes being resolved quickly and amicably.

David French, senior vice president for government relations at the National Retail Federation, thanked President Biden “for proactively working to address potential supply chain disruptions on our nation’s railways that would contribute to additional inflationary pressures. Now that we are in the peak shipping season for back-to-school and winter holiday merchandise, it is critical that both parties come back to the table to reach an agreement without any kind of rail service disruption this fall.”

The Association of American Railroads (AAR) also voiced support for the creation of the emergency board calling its members “highly experienced and respected.” AAR CEO Ian Jefferies expressed hope that the board would be able to “find a reasonable path forward … that allows both our hardworking employees and the industry to thrive in the future.”

The Transportation Trades Department (TTD) of the AFL-CIO, which is representing workers in the negotiations, also welcomed the creation of the board. Greg Regan, TTD president, accused the railroads of “nearly three years of bad faith negotiations” and said that the industry had cut 45,000 jobs since 2015, a period in which the Class I railroads had realized $146 billion in profits.

“The reality is that these frontline workers are pandemic heroes who move essential cargo and goods through the supply chain, yet they have not received a pay raise in three years and are risking their personal health and safety every day on the job,” said Mr. Regan.

The railroads counter that rail workers make more money per year than 94 percent of all Americans and that cuts made have been necessary to optimize supply chain performance.

DISCUSSION QUESTIONS: What would be the consequences of a rail strike on the retail industry heading into the Christmas season? How likely is it that the federal government would step in to prevent a rail strike should negotiations between labor and the railroads fail?

Please practice The RetailWire Golden Rule when submitting your comments.
Braintrust
"Given all of the other disruptions the nation's supply chain has endured over the last few years, disruption of rail service would be a recipe for a disastrous holiday season."

The impact would be severe. Rail is a very efficient method of moving goods across the entire nation. Cripple the trains in addition to the harbors and you have a disastrous result. Higher prices for fewer products, generally (additional) discontent, and retail and other industries would suffer a significant setback. The irony of this executive order is that the current administration has always been pro labor/pro union. And now reality is setting in. Now it has to be “pro-people,” period.

There’s an 80-year bipartisan history of interventions on rail strikes; the Biden administration is not breaking new ground here. The AFL-CIO is on board because the major railroads use foot-dragging as their main “negotiating” tool and this will help issues get resolved quickly, one way or another. (My father-in-law was the guy at the Burlington Northern who got their intermodal business up and running and had played roles on both sides of the negotiating table during his career – I really miss his stories.)

What would be the consequences of a rail strike on retail? A lot of frustration, and constant scrambling for goods. I believe it would be very ugly. Exactally what retailers do not need.

While most consumer products are still shipped by truck, rail plays an increasing role for many retail channels, as evidenced by the comment from the NRF. A strike would mean more back-ups at ports around the country, more truck traffic on the roads and higher inflation. It would mean delays and out-of-stocks. And it could lead to Amazon entering the rail business (you read it here first!).

A rail strike would be a disaster. Given all of the other disruptions the nation’s supply chain has endured over the last few years, disruption of rail service would be a recipe for a disastrous holiday season.

This would completely derail the holiday season and result in longer-term supply chain lag. The industry has yet to fully recover from the last 18 months and cannot afford to have delivery delays.

There is no argument that a rail strike would be anything but a disaster. Not just to retailers, but even more to manufacturers. Hopefully Biden’s executive order will solve the problem. Short of that, he should do what Harry Truman did.

Given the federal government’s actions to keep ports open 24/7 and protect affordable shipping, it’s likely to step in again.

A good decision. Now that the port backlogs seem to be abating, the challenge is getting needed products to retailers. The alternative of shipping more goods via trucking has severe logistics and cost related implications.

The short answer to the question is it would be a disaster. It we have learned anything from the supply chain issues we continue to face is that they can come about quickly, but take a very long time to fix.

With all of the supply chain issues, this could be a disaster. Delivery issues (trains, trucks, boats) must all do their best to right the shaky economy. Striking at a time like this could put companies out of business. That could come back to bite the striking transportation companies in a big way when the companies who used to pay them aren’t here anymore. The impact of a strike could cause damage to many companies and industries.

How likely? I think the odds start at 100%. The problem is this is a “then what” situation; as in a cooling off period is instituted, it expires, then what? (It’s my understanding there are a limited number of “rinse/repeat” interventions allowed.)

And although this is a (relatively unusual) situation where the Federal Government can get involved, it’s really typical of many industries: employees want their pay to rise — or at least keep up with inflation — companies don’t want their profits to diminish. What happens when we can’t have both?

Railroads, truckers, dock workers, and so many other transportation workers all hold immense power and impact over our country’s well-being. They should all have Federal oversight, and continue to have NLRB representation and open negotiations for all levels of employees and employers. The same should be done for the major gas and oil companies who can just increase prices without any oversight or consequences, while the rest of American foots the bill. We have yet to learn anything from the OPEC scare of the ’70s, and runaway inflation fueled by uncontrolled oil companies are at the heart of it all.

Braintrust
"Given all of the other disruptions the nation's supply chain has endured over the last few years, disruption of rail service would be a recipe for a disastrous holiday season."