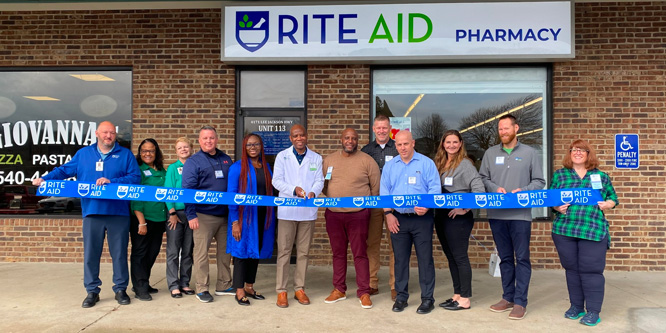 In a new pilot, Rite Aid Corp. is opening mini-locations in rural areas in order to serve “pharmacy deserts” and underserved communities.

The first location measuring 3,000 square feet opened in mid-November in Craigsville, VA, a town with a population of about 900. Residents previously had to drive to neighboring communities for pharmacy services. Rite Aid’s stores average 11,000 to 15,000 square-foot.

The chain opened a second location measuring approximately 2,400 square feet within a business strip mall center in Greenville, VA. The closest pharmacy was more than seven miles away. A third will soon open in Scottsville, VA.

Rite Aid said one in ten Americans live more than five miles from the nearest pharmacy, 29 percent of Americans fail to take their medications as prescribed due to cost and underutilization of medications drives $500 billion-plus each year in avoidable medical costs.

Heyward Donigan, Rite Aid’s president and CEO, last April on an earnings call in announcing the program, said, “We believe that supporting these unmet needs presents tremendous opportunity for us, and the price of entry for us is very low.”

She said many startups aimed at helping underserved communities “lack the assets, scale, and customers to meet the full needs of the pharmacy marketplace.”

Rite Aid may encounter similar business challenges that grocers have faced in “food deserts” partly due to the lower purchasing power of residents in many rural markets. It also appears that Rite Aid’s smaller stores do not stock the junk food, cigarettes and beer that are believed to boost traffic and margins for drug stores.

Higher insurance fees and security costs may be required due to real or perceived higher crime rates in some locations. In the third quarter, Rite Aid absorbed a $9 million increase in shrink year over year and last fall said it was considering locking up items in displays in New York City stores.

DISCUSSION QUESTIONS: Do you see growth opportunities for Rite Aid or other drug chains serving  consumers in “pharmacy deserts” and underserved communities? Do you suspect pharmacies will face similar or different challenges servicing such underserved markets as grocers have?

Please practice The RetailWire Golden Rule when submitting your comments.
Braintrust
"While it's very commendable that Rite Aid is strategically serving these forgotten communities, managing the business profitably will be critical for long-term success."

"Kudos to Rite Aid for addressing these very real needs, and coming up with a strategy to serve these communities profitably."

"This program won’t have a big impact on the bottom line unless they take the learnings from the pilot program, make tweaks, and scale in 2024."

Pharmacy deserts are a social problem and it is good that Rite Aid is looking to solve the issue of access, which could also be something of a commercial opportunity. That said, Rite Aid will need to look carefully at the profitability and cost effectiveness of smaller stores, especially if they’re in areas of limited spending power and don’t offer many other goods and services. Rite Aid’s financials are in a dire state and the company has an enormous debt pile. The business needs to have a laser like focus on cutting costs and driving profits and smaller stores will play, at best, a very limited role in this.

This seems like a smart approach by Rite Aid. Opening stores in underserved markets is a no-brainer, as long as management keeps their eyes on costs/profitability. Entering markets is the easy part; entering markets and being profitable is the hard part. If Rite Aid can find the right formula, this strategy may prove to be a productive one for years to come.

I absolutely applaud Rite Aid for tackling the lack of pharmacies in smaller rural cities. I hope that they let this test run for a long time before making the decision to keep it or not. As the general consumer gets older it’s important that they have access to what they need without having to drive a long distance.

This is a brilliant strategy. They are establishing a competitive position in which the biggies have no interest. And if successful, the competition will not be opening stores across the street or even nearby.

Rite Aid will be appreciated and become part of the community. What more can a retailer ask for? The biggest challenge for Rite Aid will be thinking small — a completely different mindset than has been the thinking for national pharmacies.

As someone who lives in an area with five full-size pharmacies within one square mile, versus one pharmacy within five square miles, I think Rite Aid has a real opportunity to find new customers and growth in pharmacy deserts. As Neil and Mark have commented, profitability will be a challenge, and Rite Aid will have to carefully plan and monitor assortments to ensure these small stores can survive. But the opportunity to help people and the business seems real. These small stores could also serve as e-commerce fulfillment and return locations for Rite Aid orders as well as third-party sites. Could be a way to drive profits (and traffic).

Dollar stores figured out a long time ago that small towns could be immensely profitable. Kudos to Rite Aid for addressing these very real needs, and coming up with a strategy to serve these communities profitably. It would be interesting to see how the merchandising mix evolves.

Kudos to Rite Aid for pursuing this strategy. It will be a winner for them as long as they keep a close eye on product assortment and profitability. Intense scrutiny on product winners and losers in the first set of stores should give them a template, but they’ll continually need to review based on the demographics of every new store they open.

The multi-format movement is marching on. In this case, smaller formats allow Rite Aid to extend its reach into underserved communities and further scale its site-to-store capabilities. It will be interesting to see how Walmart responds.

Philadelphia’s Jeff Brown of Shoprite successfully launched several supermarkets in what were up to that point food deserts. According to Jeff, the key was community involvement and ownership of the store. Rite Aid is being extremely community focused with this venture. The lessons learned from Jeff Brown may allow Rite Aid to be a business as well as a societal success.

While driving south on a family holiday, once we hit the more rural southern areas, it was clear that there were pharmacy deserts in underserved communities. However, as the research indicates, Rite Aid is the one beacon of hope for these areas, which may have only dollar stores and a Walmart within 50 miles of their homes.

The challenge all retailers and retail pharmacies face is what the optional store fleet should be, determining how to scale efficiently and maximize profitability while mitigating the upfront investment costs in new stores. Rite Aid faces significant competitive pressures from Walgreens, CVS, and Big Box retailers. While it’s very commendable that Rite Aid is strategically serving these forgotten communities, managing the business profitably will be critical for the long-term success of this initiative.

This is a great learning opportunity for Rite Aid to enter relatively uncontested smaller markets that are in need of pharmacies. Many of the current drugstore footprints (15,000 square feet) are incredibly large for what is actually needed. There is also an omnichannel angle here as these new small formats can also be used as a BOPIS opportunity.

This program won’t have a big impact on the bottom line unless they take the learnings from the pilot program, make tweaks, and scale in 2024.

Great to see Rite Aid step up to open in these areas to serve the underserved. The question for them is can they do so profitability or will it be another case where we read about where a retailer tries to do the right thing and then finds that in spite of their good intentions, they can’t make make it work.

It will be interesting to see how long it takes for Rite Aid to figure out that this is a great idea, but not something that will pay out. The deserts exist because it is not profitable to serve the market profitably. Drug stores are all challenged to keep the pharmacy staff, and this will be even harder in these locations.

While I wish them well — who wouldn’t? — I see little hope for this: there’s a reason for these “deserts” — a combination of low volume and (relatively) high cost — and I can’t see that anything has changed; (indeed, with many rural areas continuing to lose population it’s perhaps gotten worse). I don’t see a solution coming from the for-profit sector. And to be candid, seven miles doesn’t sound particularly far away: too far to walk, certainly, but even the Rite Aid will be some distance away from most people.

These look great on paper. To be profitable long-term, ideally Ride Aid locates next to or cohabitates small shopping sites with other popular consumer draws, like fresh food/micro grocery, USPS/shipping services, and coffee.

Commercial landlords will have an opportunity here to create such a collection.

Braintrust
"While it's very commendable that Rite Aid is strategically serving these forgotten communities, managing the business profitably will be critical for long-term success."

"Kudos to Rite Aid for addressing these very real needs, and coming up with a strategy to serve these communities profitably."

"This program won’t have a big impact on the bottom line unless they take the learnings from the pilot program, make tweaks, and scale in 2024."