Should Kroger go after Whole Foods? 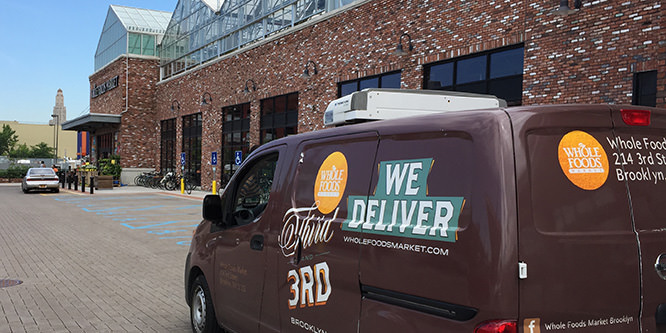 The business press headlines blew up last week over an analyst’s tweet that Kroger might be looking to acquire Whole Foods. The tweet was speculative — both companies refused to comment — as were all the articles that followed, but there are reasons that one could give to either fan the flames of this story or douse them.

Consider that Kroger has made clear its willingness to growth through acquisitions. Major deals in recent years have included Roundy’s in 2015 and Harris Teeter and Vitacost.com in 2014.

Kroger was reported to be among a small group of bidders for The Fresh Market, a competitor to Whole Foods, which was eventually acquired by Apollo Global Management for $1.3 billion in April. During that same month, Kroger announced it had made a strategic investment in Lucky’s Market, a 17-store specialty grocery chain with locations in 13 states. The company has regularly touted the growth of its organic private label business as a contributing factor to its solid sales performance in recent years.

On the skeptics side is the reality that price deflation caused Kroger to post a decline in same-store sales during the most recent quarter. As a result, the company lowered its guidance for the balance of its fiscal year.

A Cincinnati Business Courier article points out that Whole Foods’ business has struggled in recent years as the chain has encountered increased competition from conventional grocers such as Kroger as well as others focused on the organic and specialty foods niche. Whole Foods has responded by lowering prices, emphasizing its private label and initiating a rewards/loyalty program. The grocer also launched 365 by Whole Foods, a small store concept viewed by many as formatted response to Trader Joe’s.

DISCUSSION QUESTIONS: Does a Kroger acquisition of Whole Foods make strategic business sense for both (or either) companies? If it were to happen, how might Whole Foods change under Kroger?

Please practice The RetailWire Golden Rule when submitting your comments.
Braintrust
"I love Kroger but it is a whole other ball game."

9 Comments on "Should Kroger go after Whole Foods?"

I can see how this might make sense for Whole Foods, but not for Kroger. Kroger doesn’t need to buy Whole Foods to grow its organic offerings, but Whole Foods could use the deep pockets, buying power and marketing muscle of Kroger.

If you look up supermarket in the dictionary you should see a picture of Kroger. They are and should always be a traditional supermarket. They are smart, competitive and a lower-price leader in just about all KMAs. They do not need to spend the time and money to go after Whole Foods. They are competing with them successfully and one bad quarter in what may be 100 good quarters is not the time to panic and go shopping for Whole Foods. It is the time to do what Kroger does best, be America’s number one traditional and national supermarket!

Lets see, what are the upsides? Whole Foods is a well run, very profitable company. Its not a fixer-upper. It’s been hit by a lot of new competition but many of those like Sprouts, Natural Grocers, The Fresh Market, Earth Fare, Mrs. Greens and Fresh Thyme are Ponzi schemes that are in debt and many of them will be not be around in a few years. Those at the bottom do not have the wherewithal to outlast and out-compete Wholes Foods. They are all “also-rans” who have been lapped by Trader Joe’s and Whole Foods. Whole Foods has a good future. Kroger needs to digest Roundys and figure out how to get them profitable again. Whole Foods is an entirely different culture. Even though Kroger is a great company to work for, Whole Foods employees would have a difficult time adjusting to the Kroger culture. IMO Kroger would turn a great company into an average company. I also think some stock analyst is running out of grocery companies to analyze and is making all of… Read more »
4
|
-1
-   Share

My favorite comment in this discussion is “Kroger would turn a great company into an average company.” Thanks Frank! Yes the Whole Foods culture and loyalty concepts are part of what makes the brand. I love Kroger but it is a whole other ball game.

Kroger should concentrate on improving their own stores rather than buying out the competition. It’s good that Whole Foods is reducing prices to make it more competitive, but it is still the positive strategy of being independent and standing for a higher quality product that is environmentally-focused.

Bad move for both. Under one roof, the consolidations will wipe out the major marketing points of each store. You need the contrast to bolster each player. If Kroger takes Whole Foods, it will cut and gut everything that makes it great. Problem being that Whole Foods just becomes another store front that will ultimately be merged into a Kroger store and all will be lost from what had been built in the first place. The bean counters won’t let it stand alone and like the Randall’s chain that once dominated the higher end of the grocery business in Houston, once Safeway took over, it went to H E double L in short order and closed nearly all of its stores.

Given John Mackey’s considerable appetite for attention, it’s hard to imagine him settling for playing second — or third, or fourth — fiddle to some other company. Not that he could necessarily prevent a proxy fight, but I don’t see this happening.

But should it? Do any of these mega-mergers ever benefit anyone beyond the financial people that promote them … seldom, methinks. Two fundamentally different operating cultures hardly seems like promising start as an exception to that.

They need to decide — recreate a NEW version of Whole Foods or chase a loser. Whole Foods is running out of new customers. They have their lifers, but the value is not seen in the WFMI pricing and loyalty program. I know many people in my hip area who dumped whole foods for Sprouts and Frys (a Kroger market store concept). These people are saving money and still health freaks and love Kroger’s loyalty system that includes major discounts on gas. If Kroger wants WFMI and gets them, then they need to move fast to re-work the stores into Whol-ER Foods and dump the old image of only a super hip tree hugger shopping store.

TRedd – We ONLY shop Kroger, Walmart, Costco, or Sprouts.

If Kroger acquires Whole Foods and it is a separate experience, I can see this working. But, for Kroger to acquire and rebrand what Kroger has been known … well that is a bit more difficult. Yes, businesses have to grow and adapt. But that’s completely different than changing lanes.

If Kroger acquires Whole Foods and keeps them separate, will they leave management in place? Think about what happened when Amazon acquired Zappos. They let the stay Zappos and operate independently. Some of the most successful acquisitions of businesses were when the acquirer let the acquired remain autonomous.

Braintrust
"I love Kroger but it is a whole other ball game."