Walmart under-promised and over-delivered in the second quarter 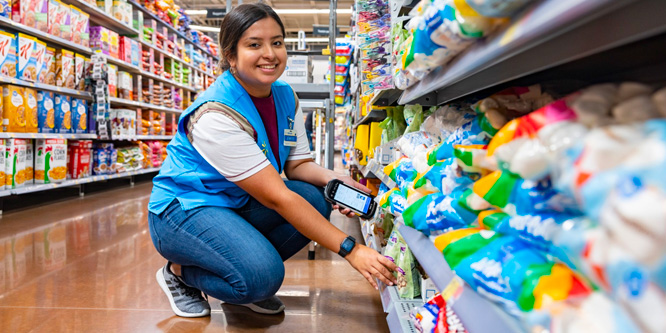 Walmart is apparently capable of surprising itself. The retailer reported better than expected sales and earnings for its second quarter just weeks after lowering its forecast.

The chain posted a 6.5 percent increase in same-store sales with food revenues up in the mid-teens due to inflation. The retailer picked up market share even though, as CEO Doug McMillon said on the company’s earnings call, units were “slightly negative” to “about flat” for the quarter.

“We had our U.S. store manager meeting last week and, among other topics, we shared examples of items where we’re holding prices down or rolling them back. Those tend to be opening price point, private brand, food and consumables items,” said Mr. McMillon.

“We want to help families put meals on the table with great value in our other private brands to relieve the pressure they’re feeling. The quality, value, and convenience we offer make Walmart a smart choice, and we’re seeing more middle and higher-income shoppers choose us,” he added.

Mr. Rainey said that Walmart is also benefiting from stronger in-stock positions within grocery. “You remember this time last year, we had pockets of out-of-stocks that kept emerging. The only one that we really faced in the second quarter in a big way was baby formula, which is now improving.”

Walmart’s bottom line performance was supported by its advertising business, which grew 30 percent during the quarter.

“Improvements to search and our large first-party shopper data have led to performance improvements for our advertisers, both year over year and sequentially,” he said. “We’ve seen the number of active advertisers investing with us increase 121 percent over last year.”

Walmart also reported that it continues to scale its Go Local delivery service almost a year after it debuted.

“We passed one million deliveries so far with Go Local. We expect to have about 5,000 pickup locations by year-end and client satisfaction scores are strong,” said Mr. McMillon. “We continue to sign up larger-scale customers, and we’re making strides on the bigger unlock, which are small and medium-sized businesses. Our technology and expertise will help so many of these businesses grow while contributing to our operating margins over time.”

DISCUSSION QUESTIONS: What is your takeaway from Walmart’s better-than-expected results from the second quarter as it relates to the national economy and retail? What roles do you see advertising, Go Local and other services playing in Walmart’s competitive and financial performance going forward?

Please practice The RetailWire Golden Rule when submitting your comments.
Braintrust
"Walmart’s spike is due to affluent shoppers looking for deals amid the inflationary pinch. No one is above deal hunting when everything costs more."

"People reward retailers that help them live better by saving them money."

"Walmart’s spike is due to affluent shoppers looking for deals amid the inflationary pinch. No one is above deal hunting when everything costs more."

Walmart is a bellwether for the industry and the economy, and the solid results are encouraging. However there is still lots of thrashing about in the market – Target, for example, just reported softer results than expected. Walmart has created a number of revenue streams, and they’re starting to see these pay off. On its current trajectory I see Walmart only gaining in strength and market share.

Walmart’s sales results are mainly good because of food. Walmart deserves credit for that because, despite a rise in the number of value and discount players in grocery, it still retains a price leadership position and is pulling in new shoppers looking to save money. General merchandise is another matter. Sales are down, and discounting has hurt margins. The net income number was OK, but operating income fell 6.7 percent within Walmart’s U.S. business. At Sam’s it plunged by 35.3 percent. The bottom line is where the hit is being felt at most retailers. This is a profit recession for retailers rather than a sales recession.

I was a bit skeptical when they issued their guidance last quarter. I believe Walmart’s leadership in price and value will only help them during inflationary times.

The numbers are not unexpected – the food numbers are good for what is going on in the market. The non-food numbers (apparel, household goods) are not good (as seen with massive price reductions for many retailers). Customers have less disposable income with that money now focused on rent, food and gas. Private label continues to grow as customers are looking for quality and value.

There was a piece on Good Morning America today about the economy, reporting that even the well off are choosing discount shopping. Makes sense.

What Amazon does is always media top of mind, but Walmart is the retailer consistently making a difference in consumers’ lives. People reward retailers that help them live better by saving them money.

This is not the first time Walmart has under-promised and over-delivered. I believe the company did the same in 2016 or 2017 – warned profits would take a hit for a couple of years because they were making significant tech investments. Well, profits bounced back sooner than expected, and those tech investments really paid off during the pandemic. It’s actually an interesting strategy and does make the stock pop.

My takeaway is that Walmart’s consistent in-stock position served it well, along with its treatment of employees, which made it a more desirable place to shop if people had to trade down.

So I think the keys to success were a strong in-stock position and respect (and cash) for frontline workers.

Walmart’s spike is due to affluent shoppers looking for deals amid the inflationary pinch. No one is above deal hunting when everything costs more.

Let’s not forget Walmart’s brand equity for value. Savvy shoppers know that their dollars can go further in Walmart stores, buying the same product for a lower price. The upscale shopper might not buy their clothing there, but they’re probably not buying as many clothing items anyway; same for Walmart clothing purchasers. Increasing their number of revenue sources helps as well. But I think that its brand equity is the firm foundation on which Walmart is reaping rewards.

Walmart has done a terrific job of offering own-label food items at anti-inflationary prices. While its other initiatives have been heralded, the food initiative is the game changer here. The challenge will be to bring the rest of the store mix along.

Walmart erred on the side of caution when it issued earnings warnings last month. Proactive actions including price reductions and order cancellations helped beat Wall Street’s expectations. Billions of dollars in order cancellations no doubt helped to improve the picture but also caused pain for suppliers. Walmart’s bifurcated approach paid off – lowering prices and offering compelling private brands for lower-income shoppers and improving its overall brand offerings in higher margin categories like apparel and home. Back-to-school provided a perfect traffic-driving occasion to test the strategy in the run-up to the holiday shopping season.

Not unexpected across many retailers. Metrics are always a bit skewed when there is rapid growth (or inflation). Q2 has increased prices across the board up to the 9.1% inflation rates at the end of the quarter and this has driven higher earnings. Walmart acknowledges this shift in their earnings release. However, a bit of stability in July of the inflation numbers suggests Walmart can pick up again as they’ve kept their expense structure steady. Most initiatives they’ve undertaken don’t show instant results, it takes a few quarters to begin building support, adoption and eventually — growth.

Overperformance is always the best kind of surprise, but a meaningful question would be, did Walmart deliberately skew its forecast toward conservative hoping for this result?

Braintrust
"Walmart’s spike is due to affluent shoppers looking for deals amid the inflationary pinch. No one is above deal hunting when everything costs more."

"People reward retailers that help them live better by saving them money."

"Walmart’s spike is due to affluent shoppers looking for deals amid the inflationary pinch. No one is above deal hunting when everything costs more."