What didn’t Jeff Bezos know and when didn’t he know it? 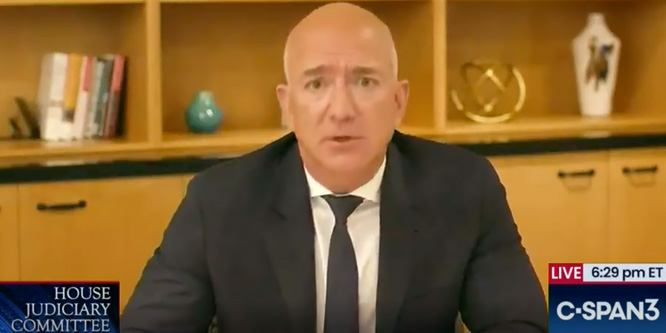 A Republican representative from Wisconsin may deserve some social media mocking for not knowing the difference between Facebook and Twitter after yesterday’s “big tech” Congressional hearing. What, however, can you say of Jeff Bezos?  Amazon’s CEO offered less than satisfactory answers to questions about his company’s vetting of third-party sellers and its alleged use of sales data to compete directly with the marketplace vendors and brands it claims are so important to its business.

Rep. Lucy McBath (D – GA) questioned Mr. Bezos about the information that Amazon requires third-party sellers to provide in its efforts to prevent the sale of stolen goods on the site. When asked how his company verified that information supplied by third parties was accurate, he said, “I don’t know the answer to your question.”

Mr. Bezos would not be the first CEO of a company not to know “how the sausage is made,” so to speak, but his lack of a ready-prepared answer is startling since it was common knowledge that the sale of counterfeit and stolen goods on the platform would be on the list of questions he would be asked.

For the record, Amazon introduced a program earlier this year that involves in-person verification of third-party marketplace sellers. When the pandemic hit, Amazon shifted to a video call verification system.

Mr. Bezos also said in his testimony that his company will pursue action with law enforcement authorities when and if it becomes aware of sellers engaged in illegal activities using its marketplace.

In response to a question by Pramila Jayapal (D-WA) about a Wall Street Journal report earlier this year that Amazon has leveraged sales data from third-parties to launch competitive private label items, Mr. Bezos cited company policy that prohibits that activity.

“I can’t guarantee you that that policy has never been violated,” he said. “We continue to look into that very carefully. I’m not yet satisfied that we’ve gotten to the bottom of it, and we’re going to keep looking at it. It’s not as easy to do as you would think because some of the sources in the article are anonymous.”

DISCUSSION QUESTIONS: How important is ending the sale of stolen and counterfeit goods to Amazon’s future success? What about allegations that it is using data to compete directly with third-party sellers on its platform?

"Perhaps not knowing is purposeful. Not knowing prevents you from having to say “yes we do that. It’s part of our growth strategy.”"

"If he had to go before investors, it’s beyond a doubt that he would have proper answers."

39 Comments on "What didn’t Jeff Bezos know and when didn’t he know it?"

Ending counterfeit goods is an ongoing challenge, but I don’t think it’s impacted Amazon’s success in any material way. The allegations about competing directly with third-party sellers are more problematic. The fact is, sellers can choose to be on Amazon or not, however, given its size and place in online retailing, the choice for these sellers is difficult: sleep with the enemy (Amazon) or try to go it alone without the massive distribution from Amazon? This is not a new issue, and I was unsatisfied with Bezos’ answers to these questions.

Did he really not know the answers to those questions or was he displaying his version of CYA?

Jeff Bezos’ performance is disappointing, but expected. Apple, Amazon and Facebook bend over backwards to portray an image that they are not very big, and claim innocence or ignorance about indulging in anti-competitive practices. It is laughable.

Does Amazon care? Nope. Their goal will be one bill each month for your digital subscriptions, healthcare, banking, insurance, and even merchandise. Make no mistake the data is all Amazon is about as it digitally connects the dots to steal market share and keep customers close. Selling on Amazon is still a deal with the devil.

“Keeping customers close” is the objective of every business. “Their goal will be one bill each month for your digital subscriptions, healthcare, banking, insurance, and even merchandise.” Shouldn’t it be?

Yes — if you are going to do business with Amazon, do it with your eyes wide open.

I have a problem with the sale of stolen and counterfeit goods on Amazon — especially because it violates the bond of trust between company and customer. I take less issue with using data to develop private label goods.

If you’re Macy’s, or Kohl’s, or Target, you evaluate the sale of products from your own suppliers — especially the national brands — in order to uncover trends and opportunities in your own labels. (And sometimes those branded suppliers lose shelf space to private label goods, just as they do in grocery stores.) Is what Amazon doing all that different, or is the issue its sheer scale and ability to read and react to the data?

Amazon’s strong arm tactics extend beyond that. The Wall Street Journal documented a number of instances where they engaged companies with bait for acquisition, sought proprietary information, and promptly launched competing products.

I am personally aware of instances where Amazon is forcing brands to sell on Vendor Central based on the data they see on Marketplace.

There is a suspicion in the seller community that Amazon sponsors some level of unauthorized reselling of the products that are not on Amazon yet. They then use this data to approach brands to put products on Marketplace or Vendor Central.

The last one may sound like a conspiracy theory, but seeing WSJ’s investigative reporting, I’d not be shocked if it turns out true.

Mr. Bezos is fully aware that the Amazon brand is built on trust. Consumers trust the value received, the Prime service promise, the ease of enjoying the multitude of consumer offerings, and the trust consumers have placed in Amazon regarding their data. That is the background against which Mr. Bezos must confront his inner demons of crushing any and all competitors; he cannot ignore his company’s trust issues with third-party vendors while relying on the consumer trust he has worked hard to create and earn. Amazon cannot have it both ways.

Jeff Bezos has jumped the shark. This one-time entrepreneur has joined the ranks of untrustworthy company execs who deceive and obfuscate to protect the bottom line, all while claiming ignorance of his company’s misdeeds.

If I am the CEO of a trillion dollar company with over 800,000 employees, I may tell a subordinate that we must vet third-party vendors. That person will send the message to the next level down, then the next and the next. Finally a team will be put together to establish a program.

I assume it is getting done. If I have any follow-up, the extent of it is asking that subordinate if it got done. End of conversation.

If I am asked how, I answer the question honestly: “I have no idea.”

I will add personally, nor should I have any idea.

Don’t you think he should have known he was going to be asked that question or something similar to it in advance and been ready to answer it? Mr. Bezos’ apparent unpreparedness for obvious questions seems very un-Amazon-like to me. The company and its communication reps are as good as it gets in my experience. “We’ll get back to you” responses are a far cry from that.

Should he have known the question was coming? Yes. Should he have had an answer, yes. Should it have been in excruciating detail? No. Should he know the details of the process on an everyday basis? … Not if he is doing his job as CEO.

We have this idea that CEOs know exactly what goes on in their companies. CEOs are not the sheriff, they are a leader.

My company, Allendale Pharmaceuticals had great experiences with Walmart and Amazon as customers. On the other hand, Walgreen’s refused to pay us (until the lawyers got involved) and Target continually took unjustified deductions. Why? Because they could. Do I believe that the CEOs of either of those companies knew what was happening? No way.

“I don’t know the answer to your question” equates to “excruciating detail” for you Gene? Were your example companies’ CEOs testifying before Congress?

You must really be smitten with Bezos/Amazon to be apologizing for him so extensively in this discussion.

I agree. He should have had a paper ready to read with a very simple and concise answer. For that he would have been skewered as he is now as dodging the issue.

Did he handle it well? No. Are our expectations of what a CEO of a large company knows ignorant? TOTALLY!

Gene, you are saying, in essence, that it’s a CEO’s responsibility (to his shareholders, I imagine) to be willfully ignorant of matters he is being questioned on by the U.S. Congress. Perhaps true, and all the more tragic, if so.

He should have know the question was coming. He should have been prepared to give a BRIEF overview. If Congress wanted to know details, then bring in the guy who is running the vetting program.

I will go one step further. If he knows the details of how it is done, he is not doing his job as CEO, he is getting too involved in the everyday business of a company that has 800,000 people and a value of $1 trillion.

Ending the sale of counterfeit goods is vital to Amazon’s future success. Companies that earn our trust earn our business. Fraudulent players put Amazon’s consumer loyalty at stake. Amazon’s recent launch of a Counterfeit Crimes Unit shows it is willing to take action against shady suppliers to restore consumer confidence.

As for private label, it depends whether Amazon accessed more detailed, proprietary data than most retailers receive. Whether that is the case is currently unclear. Private label has always been built on the notion that “imitation is the sincerest form of flattery.” Retailers see what’s selling then replicate popular products to get in on the action.

Disappointing and disingenuous. He had to know going in that he would be expected to answer that question. It was a moment to either build trust or skepticism. So skepticism it is.

Say I am the head of product development for my large supermarket chain. A new vendor comes in and sells us a new type of cookie, “New Cookie.” It is hugely successful and I notice its success as I check the weekly item sales. “New Cookie” is flying off the shelves.

Is that different from what Amazon does?

Lets assume for a moment Bezos was completely truthful in his answers – the sale of stolen and counterfeit goods has been an ongoing problem and he has instituted (at least in name) programs to address the issue. More importantly, to be fair to Bezos, he has 2.5 million+ sellers on the platform and over $160 billion in third-party merchant goods sold on his site. The real question here is, what is the level of responsibility his platform has over sellers on his site and tracking counterfeits? For end-customers, the counterfeits are difficult to detect, only the brand names like Gucci, Ulta, Prada, etc. care about and take steps to stop the counterfeiting, but they are also depending on and growing business with huge markets in Asia – particularly China, which is known for many actors engaged in counterfeiting. For Bezos, he may truthfully not know or perhaps can’t know because of the volume of business. Putting impenetrable safeguards in place can be cost prohibitive and lawsuits to date are a lower cost of doing… Read more »
3
|
0
-   Share