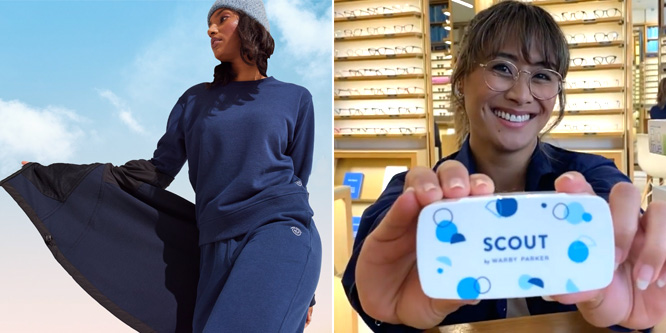 Direct-to-consumer brands that have made their names focusing on one product very well are starting to expand into new product lines, making their selections broader and more akin to what you would find in a traditional store.

Allbirds and Warby Parker are both planning to significantly boost their selection of products in categories adjacent to their main one, according to PYMNTS. Apparel currently takes up less than 10 percent of Allbirds’ product offering, but the shoe brand is planning on raising that number with new selections of lifestyle and performance products.

In the case of Warby Parker, the eyeglass brand is planning to build its contact lens and vision testing business, areas where it lags significantly behind traditional eye care retailers.

The move by Allbirds and Warby Parker do not represent the only shifts these two direct-to-consumer brands have made to begin operating more like traditional retailers.

The once online-only Allbirds began opening physical store locations in 2017, with its first store in San Francisco and a second following a few months later in New York City’s SoHo district. At present Allbirds has 31 store locations nationwide, having opened up four in the third quarter, according to Barrons.

Warby Parker has taken a similar tack. The company was founded as an online-only retailer in 2010 and slowly began opening physical stores in major markets in 2013, beginning with a NYC location, according to CNBC.

The eyeglass brand now boasts more than 130 store locations, according to Chicago Business Journal. Its newest Chicago location will offer eye exams, a full selection of glasses and will sell the brand’s first new set of contact lenses.

Similarly, over the past few years, D2C footwear brand Soludos expanded into women’s apparel after a successful test-run, according to Forbes. The brand found that apparel purchasers had a 50 percent higher LTV than non-apparel customers. Razor brand Billie expanded into beauty essentials, and shoe brand Rothy’s expanded into bags.

DISCUSSION QUESTIONS: Should D2C companies that make their name on one product consider expanding into adjacent categories? What are the potential advantages and disadvantages of extending a narrow product mix?

Please practice The RetailWire Golden Rule when submitting your comments.
Braintrust
"If the adjacent category clearly aligns with the brand’s well-known strengths, expansion is smart and natural."

"If you have spent years building a strong brand you can very quickly destroy the brand value if you are seen as not delivering in those new areas."

"Expansion into adjacencies is only natural...Without innovation or newness, brand heat will dissipate."

21 Comments on "What happens when D2C brands diversify product lines?"

If the adjacent category clearly aligns with the brand’s well-known strengths, expansion is smart and natural. The trouble with brands doing this is that they often choose a category that doesn’t obviously connect to how consumers know and think of them. When that happens, they’re competing against established, beloved brands, in a foreign category.

Yes they should – once the brand loyalty and equity is established, they can definitely add their own product or do collabs (which tend to cost less to build and distribute). The bottom line is DTC does not just refer to a single product line. RH is now opening resorts. Consumers are willing to embrace expansion within the brand equity – Ralph Lauren started this and the blueprint remains.

Extending D2C brands to adjacent product categories has been a natural transition for companies looking to expand revenues. A good example is shoe brands Nike and Adidas that expanded into apparel and gear that now accounts for a significant portion of their revenues (Nike 33 percent and Adidas 44 percent). It is a smart strategy to expand to adjacent product categories as long at they aren’t too big of a stretch.

If a brand is able to dedicate as much passion for the secondary product lines as they do their initial one, then there is reason for consideration. Creating more stability is one advantage, but a potential disadvantage is a loss of trust if the secondary lines don’t meet established brand or market standards. Usually the “solo D2C” brands specialize in a product that they have created some degree of disruption in – this is less likely to be true for secondary lines.

A brand promise is hardly confined to a single category. It becomes a function of how logically and seamlessly the new categories align and team up with the original category. Ralph Lauren started his business with a line of men’s ties. He did fairly well with his product extensions.

Your caveat is the key, Jeff. Is there alignment or coherency with the starting point? I’m not so sure that many brands build on a working awareness of just what the “brand promise” is.

D2C companies should definitely consider expanding into adjacent categories as they have the advantage of building deeper relationships with their existing customer through digital/physical engagement. Learning what the customer is looking for, building assortments through collaboration and insight directly from the customer, and testing with their most loyal is exactly how you should expand your product mix.

This is the advantage of a D2C brand. Once they have proven success with a tight product mix and brand loyalty, the world is their oyster. From a merchandising perspective, the more you know about what your customer wants and what assortment gaps you can fill, closing that feedback loop will bring endless opportunities and product ideas for a brand.

Customers shop for trust in a brand as much as shopping for products. Once a brand has established their value it only makes sense to expand their product offerings to grow basket size, deepen loyalty and increase lifetime customer value. And if the products leverage existing supply chain partners then brands can potentially leverage scale to further improve profit margins.

This is not any more unusual that brand names extending their lines. It’s smart and expected.

The key issue for all these companies is acquisition of new customers. And with that acquisition, maximizing profit from each. If these expansions bring more new customers then they can be quite effective. What concerns me are programs where the goal is only about bigger purchases from those already shopping their brands. History does not show this to be a good direction.

There was an excellent Twitter thread by Kevin Hillstrom (@minethatdata) considering the key need for acquisition this past week. I highly recommend his experience.

Any brand, D2C or not, must carefully tread into the expansion waters. To successfully expand, the shift must make sense based on core brand equities and offerings. It’s only natural for brands to want to expand after they capture a segment of success and move upstream to the next part of the category. Innovator’s Dilemma, anyone?

There are ways to diversify; some work and some won’t. The simple key can be seen in both the Allbirds and Warby Parker examples, at least it appears so.

The principle I suggest is: Congruent Diversity. Or to put it another way — stay in your lane but don’t be afraid to strategically broaden it as profitably as possible. As I learned from Sesame Street, if one of your D2C products is not like the others, you are already on the slippery slope. Warby Parker expanding into hearing aids isn’t congruent nor is Allbirds expanding into dietary supplements.

That is unless they redefine their lane which can be even more hazardous. This is the old “are you in the train business or the transportation business” concept, the implication of which isn’t as wise as it used to be.

A brand is not a product. A brand is a place in the consumer’s mind. As long as the expansion is a domino move, it makes sense.

Doesn’t McDonald’s sell chicken? Shoes to apparel worked for Zappos. Books to the everything else worked for Amazon. But there must be a natural connection that doesn’t fog the brand in the consumer’s mind.

There has always been a natural evolution of retail, wholesale and brands blurring the edges. Retailer own-label products and brands going online are both part of the dynamics of this business. However when brands start to move into areas they are not specialists at, they are entering dangerous ground as it could harm their brand equity if they get it wrong.

Having the structure, skills and capability to buy in products that are not completely under your control requires a different expertise and business structure. If you have spent years building a strong brand you can very quickly destroy the brand value if you are seen as not delivering in those new areas.

When I think of diversification, I think of a company that makes refrigerators deciding to get into auto parts. For Warby Parker to diversify from selling glasses to also include eye exams is expansion of the vertical, not a true diversification. Moving from online to physical locations is a form of diversification, but in a different sales channel selling what they are known for, not an entirely new product line that would confuse the brand. “Adjacent categories,” that don’t confuse the consumer are a safe bet. It is a restrained – maybe even safer – level of diversification.

A high quality DTC brand that offers additional product lines or extensions that reinforce brand equity is always a smart move. Similarities abound in the CPG world and having spent many years at Coca-Cola, we successfully replicated this play hundreds of times. Some were highly successful and some fell flat, but today’s DTC brands like Warby Parker have been prudent with their current strategies and I see no reason for them to abate.

A product (or set of products) is not a brand. A brand is a story that consumers want to tell about themselves and/or share with others. Expansion only makes sense if it aligns with the brand story and the foundation has been built.

Great way to say it. A brand promise is not what the brand says it is. It’s what the customer thinks it is.

E-commerce companies that have built a strong brand based on a single product line should be able to successfully expand into relevant adjacencies. This is a standard maxim of marketing. The devil will be in the details. The key will be to maintain discipline, focus on the core, and make sure not to get overextended in either real estate or inventory as the product line expands.

Expansion into adjacencies is only natural. A pure online brand needs physical stores especially if their products require touch/feel/try. In parallel, once they’ve established themselves in their core categories, it’s important to have something “new” in order to keep bringing back their loyal customers, especially in categories that are durable vs. consumable to build customer lifetime value. Without innovation or newness, brand heat will dissipate.

D2C retailers’ brand experience is not limited to just the buying process. These companies are essentially building an ecosystem around their products. An ecosystem in which each time a customer interacts with a product, they know exactly what to expect, and the retailer is perfectly capable of understanding and fulfilling the customers’ expectations.

Many retailers seek to expand, but fail to retain brand value, and end up jeopardizing customer loyalty. Expanding into adjacent categories makes sense as long as the retailer can retain brand consistency and value proposition.

Braintrust
"If the adjacent category clearly aligns with the brand’s well-known strengths, expansion is smart and natural."

"If you have spent years building a strong brand you can very quickly destroy the brand value if you are seen as not delivering in those new areas."

"Expansion into adjacencies is only natural...Without innovation or newness, brand heat will dissipate."