What should Amy’s Kitchen do about workers’ safety complaints? 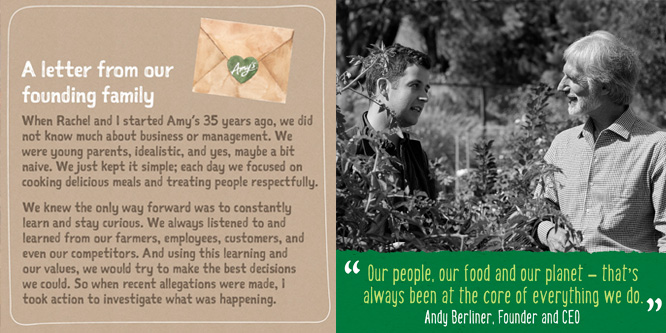 Founded as a mom-and-pop business, the company projects a philosophy of taking care of its employees and being kind to the planet. The company, however, is accused of having dangerous working conditions at its Santa Rosa, CA, plant, according to a recent Washington Post article.

In the complaint to California OSHA, an employee said workers were expected to roll 10 to 12 burritos per minute, and each line was expected to assemble 72 plates of food per minute.

The complaint, which was co-signed by a local Teamsters official, alleged a lack of bathroom breaks and clean water, blocked fire exits, and a pattern of repetitive stress injuries. A Teamsters official said that “the injuries and working conditions were the worst that our local had ever seen.” (The union is also involved in an attempt to organize Amy’s Kitchen’s workers.)

Amy’s founder Andy Berliner has asserted in social media posts that the accusations are not true, while pledging to do better. He claimed the plant has 16 water stations throughout the building, that employees have regularly scheduled bathroom breaks and can go whenever they need to, and that none of the fire exits were blocked. He said the company has spent millions on safety and plans to spend an additional $50 million over the next five years.

Amy’s has hired a consultant, while activists have started a boycott. Some independent/smaller stores have stopped carrying Amy’s, but no major chains have apparently done so.

Workers say they want to meet with the CEO and the Teamsters local to discuss how to stop needless injuries and to allow the unionization process to play out without interference, according to Thrillist. Lauren Ornelas, the founder of the Food Empowerment Project, wrote a letter to Berliner stating that it is “unconscionable” that a vegan/vegetarian company fails to treat its workers with respect or pay attention to their health when the company was founded on the idea of healthy eating.

DISCUSSION QUESTIONS: How does a company/brand such as Amy’s Kitchen repair its reputation after allegations are made that threaten to undermine its brand positioning? Are worker complaints more likely to harm a company like Amy’s than those made against much larger firms?

Please practice The RetailWire Golden Rule when submitting your comments.
Braintrust
"If the company appears to be 'just like everyone else' it will definitely damage its business. The timing is terrible."

"I think I speak for organic vegetarian eaters everywhere when I say, we’ll be watching (closely)."

"I find the accusations hard to believe, especially coming during a union drive."

10 Comments on "What should Amy’s Kitchen do about workers’ safety complaints?"

This is a particularly serious problem for Amy’s since it is often touted amongst the “health conscious” as the only remaining independent frozen organic meal seller. All the others belong to far larger conglomerates.

If the company appears to be “just like everyone else” it will definitely damage its business. The timing is terrible.

The first question is, who has the credibility? Do Amy’s fans believe the media reports of complaints, or do they believe Berliner, that the company is doing what it should? I suspect the reputation of Amy’s will win this one, particularly given that Berliner is involved in the message.

If OSHA does find that the complaints are credible, then we have a completely different story.

Throughout my retail years, I have fielded difficult issues like Amy’s is facing. The rub comes from the employees’ comments, feelings and aggravations of operations. That being said, we always found that many and most complaints were easily fixed when we had the employee groups involved in sessions on how to address and solve the situations. In the end all staff members felt connected more than ever, and most times harmony grew. Rarely was there a time when we had a stand still.

To repair its reputation, Amy’s Kitchen needs to speak directly to workers to understand their concerns. A mediator could ensure both sides feel heard. For instance, are the productivity expectations unrealistic or unsustainable?

The company can be proactive by sharing flattering audit results and worker testimonials to counter complaints. It can solicit workers’ input to ensure upcoming health and safety investments resolving key concerns.

Complaints are more likely to harm smaller companies, which lack the legal, PR and internal communications muscle of bigger brands.

Senior management needs to address these allegations head on and initiate an immediate and strong response. It’s good to see that Amy’s has hired a consultant. I would hope this consultant is an expert in crisis communication and PR because this is exactly what they need in this situation. Amy’s can get ahead of this by addressing every complaint, whether they are legit or not, and reinforcing the communication with corrective actions that are visible and acceptable for the workforce.

As a regular consumer of Amy’s products, I am saddened and concerned by these accusations. I sincerely hope they are thoroughly investigated and any issues are resolved. I suspect many other loyal Amy’s consumers, like me, will suspend further purchases until we see a full accounting of the actual conditions and a transparent and closely monitored corrective action plan in place. I am optimistic that the brand can survive this crisis, but transparent, authentic and meaningful steps to correct any wrongdoings will be critical to maintaining consumer trust. I think I speak for organic vegetarian eaters everywhere when I say, we’ll be watching (closely).

Every company must act in front of customers and behind the scenes with employees congruent with their mission and reputation they wish to be known for. I don’t have the facts for Amy’s Kitchen but, when accusations are made, there needs to be a clear response. The thinnest piece of paper has two sides, and both sides should have a chance to share their version of the problem.

This makes me think of Disney, known by its customers as “The Happiest Place on Earth.” Most employees love their Disney career, but there are outliers who claim the experience is everything but happy. Some of them are very vocal about it, too.

Whether the complaints are true or not, the PR problem for Amy’s is more damaging than it would be for many companies given its positioning in the marketplace. I do find the timing to be interesting given that this comes as the Teamsters Union is trying to organize the plant.

We have a one said/other said situation here, so the real question seems to be are “allegations” — even when they come from a (potentially) biased party — enough to besmirch a company, or is something less partisan actually needed (say a confirmation from a government agency)?

I’ve known Andy and Rachel Berliner since they started their business 35 years ago. They are solid, honest, compassionate and conscientious people. For this reason, I find the accusations hard to believe, especially coming during a union drive. I am sure this is very hurtful to the Berliners; my heart goes out to them.

Braintrust
"If the company appears to be 'just like everyone else' it will definitely damage its business. The timing is terrible."

"I think I speak for organic vegetarian eaters everywhere when I say, we’ll be watching (closely)."

"I find the accusations hard to believe, especially coming during a union drive."